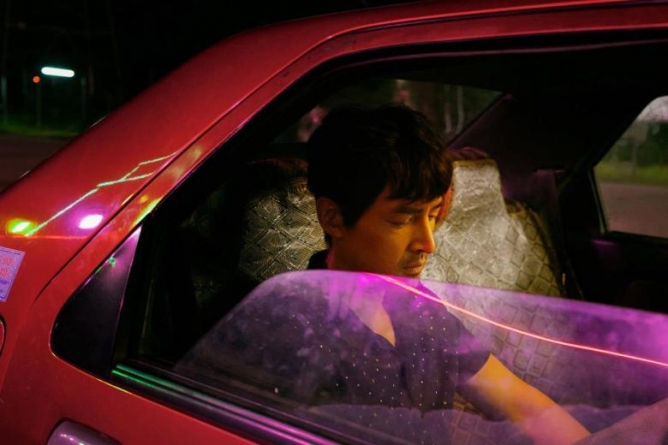 A film of concrete aesthetics, of precise framings of looming city buildings and spacious rural landscapes, of figures squirreled away in the shadow of the underground and nakedly exposed under streetlights.

Diao Yinan’s The Wild Goose Lake is a film of concrete aesthetics, of precise framings of looming city buildings and spacious rural landscapes, of figures squirreled away in the shadow of the underground and nakedly exposed under streetlights. Yet in many ways it feels spectral, a ghost story in which characters always seem to be on the verge of dissipating in a strong breeze. Its opening interaction, a meeting in the rain between a man, Zhou Zenong (Hu Ge), and a woman, Liu Aiai (Gwei Lun-mei), establishes the expendability of its gangland criminals: Liu materializes as a fatale seductively lighting a cigarette as she informs Zhou that her wife could not meet him. “If you want, I’ll replace her,” she says ambiguously. Arranged facing away from each other as rain pours outside, the gangster and the moll look like the embodiment of generic figures, and their precise blocking prefigures a stylish crime epic.

Diao, whose Golden Bear-winning Black Coal, Thin Ice similarly employed noir tropes to convey the moral rot and general anomie of China’s uneasy transition from statist authoritarianism to unchecked capitalism, quickly sets up a world in which criminals and cops share a certain degree of unchecked power. An early scene of gangsters assembled in an underground lair, discussing how to steal motorcycles, is later contrasted with a police meeting to plan a manhunt that is framed similarly and includes nearly identical reviews of local maps and division of territory. Throughout the film, civilians are caught between the internal wars of mob bosses but equally at risk from police crackdowns, in which streets are flooded with uniformed and undercover police who not only round up entire neighborhoods in dragnets but occasionally get into gunfights with criminals as numerous civilians are caught in the crossfire.

The manhunt itself is devoted, naturally, to Zhou, who inadvertently shot and killed a cop after getting embroiled in an internal turf war with a rival gangster, Cat’s Eye (Huang Jue). Diao shoots the sequence of the respective crews’ “Olympics of theft” to boost the most motorcycles for territorial rights with brutal poetry, using the sound of roaring engines and the firefly dance of headlights in montages of the crews crisscrossing the region to bring back stolen bikes. Cat’s Eye, deciding to be done with this relatively nonviolent confrontation, plants a forklift blade at the end of a tunnel, decapitating one of Zhou’s lieutenants before his own henchman shoots the rival boss. As Zhou attempts to race to safety, eyes blinded with blood and rain, he mistakenly shoots an officer on routine patrol. “If I’d known he was a cop, I probably wouldn’t have shot him,” Zhou explains to Liu, bringing the film back to the present of the opening.

The film tracks Zhou’s attempts to evade both Cat’s Eye and the police with a seemingly disconnected narrative focus that belies the sharpness of Diao’s imagery and the hard cuts of the editing that frequently leap over actions to jump to their aftermaths. Dong Jingsong’s cinematography makes expert use of fluorescent streetlights as lonely markers on darkened alleys and city outskirts, while many frames are bathed in red and purple glows from looming neon signs and the buzzing din of city noise heightens the claustrophobia and paranoia that hangs over even the most dispassionate and sedate moments. Diao stages some wonderfully experimental action scenes, including a firefight in which undercover cops wearing light-up shoes for a nearby dance party appear all around some mobsters, their feet bathed in blue halos as they shoot at criminals and ultimately gather around the corpse of a fallen gangster. Elsewhere, an umbrella is used as a weapon in a sudden burst of gore that shakes the film’s final act from its contemplative resignation.

That preemptive defeat hangs over The Wild Goose Lake, as Zhou knows full well that he has no chance of survival and merely wants to last long enough to ensure he can leave something behind to support his wife, Shujun (Regina Wan). He knows that Liu has been sent by the gang’s overlord, Hua Hua (Qi Dao), to lure him out to give to the police as an expendable thorn and a lucrative informant payout. Facing certain doom, Zhou accepts the true reason for Liu finding him, and he conspires with her to arrange his ultimate handoff in exchange for giving some of the profits to Shujun. This curious arrangement fragments the traditional role of the femme fatale, setting Liu on a course to betray Zhou, albeit with his full knowledge and consent. Gradually, a loose kind of love triangle forms, one that joins Zhou’s loveless but nonetheless dedicated commitment to Shujun with his fatalistic desire for companionship, and Diao mounts a sex scene that is both circumspect and shockingly explicit, cutting around the act itself as Liu and Zhou take a boat ride but showing Liu spitting a mouthful of semen into the water, the shot holding as the liquid dissipates in an oddly touching reverie.

Such moments of quiet reflection and grace abound in a film that can be brutally nasty, from Zhou’s increasing injuries as he evades capture to the ways that Diao equates the savagery of Cat’s Eye to the ruthless authoritarianism of the local police captain (Liao Fan). American and British noir of the post-WWII era navigated the uneasy self-confrontation of national and self-identity at a time of empire’s end and capital’s ascent. The Wild Goose Lake, not unlike Diao’s previous work and the recent genre fare from Jia Zhangke, similarly contemplates China’s rapidly changing face and how the alienation of the average individual has only been compounded by the nation’s growth into an economic superpower. Diao mounts many dreamy, stylish set pieces (a chase through a foggy zoo after hours is a bravura triumph), but the film is at its most compelling when its visual extravagance underpins moments of pared down movement and silent rumination by characters facing up to their bleak prospects with as much dignity as they can muster.