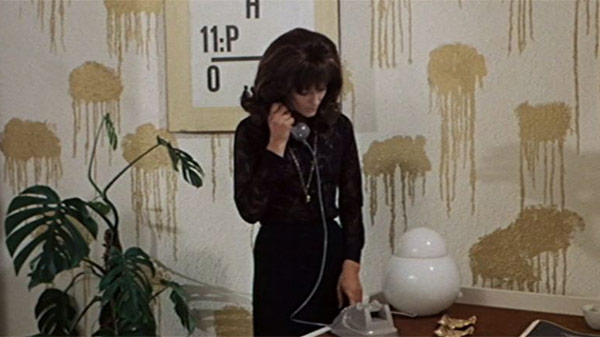 Works best perhaps as a necessary humbling of a filmmaker who came out the gate smoking hot and needed to learn the limits of his style as early as possible.

After over performing with his directorial debut, Dario Argento’s sophomore effort, The Cat o’ Nine Tails, would go on to be a film he considered to be his worst. But why such a stark disparity?

Stylistically, the film follows in The Bird with the Crystal Plumage’s ornately arranged footsteps. It is just as gorgeous in its photography, as deliberate in its framing and camera movements, and every inch as suspenseful. It’s also just too much. Yes, Argento here was still working within the giallo subgenre’s subtle perversions of the whodunit structure, but the narrative is built in such a frustrating and unsatisfying way that no amount of sharp imagery can overcome its ultimate futility.

The film begins with a break-in at the Terzi Institute, a large medical complex that would suggest some kind of corporate espionage is afoot. That is, until bodies begin to pile up left and right. The ongoing mystery is split between two separate would-be detectives: Karl Malden as “Cookie,” a clever blind man who loves puzzles and happened to overhear a blackmail scheme the night before the break-in and Carlo Giordani (James Franciscus), a reporter working on a story about this whole mess.

From there, the mystery just grows more and more involved, like a tapestry woven entirely from red herrings and incidental complications. The tangled web involves medical research designed to isolate a “criminal gene,” parlor room intrigue over potential incest and, because this is an Argento film, lots of people getting choked to death or comically throw in front of trains. At every turn, it feels like a man trying to recreate his inimitable debut film, but worse and less captivating.

The scene-to-scene compositions are still compelling, with multiple set-pieces working just fine on their own to draw the eye and dazzle with its control of the viewer’s nerves. But it’s all the white space between those sequences that drags the film down, as the plot is little more than a rickety ladder whose rungs are constructed from shaky narrative tics. The higher you climb, the harder it becomes to find steady footing.

When an audience is no longer connected to an ongoing mystery and there’s entirely too many suspects and conflicting plot threads, the central intrigue doesn’t function. Rather than trying to solve for x along the way, the film leaves no room for the viewer to do much of anything save to anticipate the next kill or to marvel at Argento’s considerable gifts for aesthetics.

The Cat o’ Nine Tails works best perhaps as a necessary humbling of a filmmaker who came out the gate smoking hot and needed to learn the limits of his style as early as possible. The film did okay stateside, but wasn’t the same kind of sensation overseas. Today, it seems like a case study in how integral a properly written screen story is to showcasing a director’s visual storytelling acumen and how depressing a final product can become in the absence of harmony between said story and how it winds up being told.