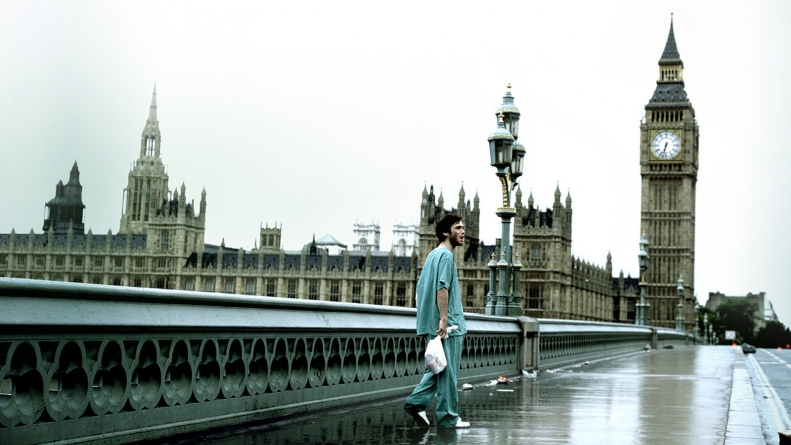 It all began with us. That’s the message immediately penetrated to the viewer in Danny Boyle’s 2002 post-apocalyptic horror feature, 28 Days Later. The film begins with a chimpanzee tied to a table, forced to watch multiple screen showcasing violence and war from across the world as if it were Alex DeLarge in A Clockwork Orange. Other contaminated chimps violently thrash in their containments, until they’re released by a group of ignorant animal liberation activists who unleash the highly contagious “rage virus” upon Great Britain. The zombie-like contagion comes to fruition almost instantly after being transmitted, causing the afflicted to immediately unleash violence upon anyone around them, further spreading the disease through bites, scratches and transferring blood through various orifices.

In a current climate where the new strain of novel coronavirus, COVID-19, has rapidly spread throughout the world since the beginning of 2020, 28 Days Later is a horrifically relevant viewing experience. While it may not be as on-the-nose as films like Outbreak or Contagion—both of which have been topics of discussion when drawing parallels between virus-based narratives and our current reality—Boyle’s film is arguably more terrifying in how it showcases the aftermath of these events. Seen through the eyes of Jim (Cillian Murphy), a bicycle courier who awakens from a coma to a deserted London, 28 Days Later gives us a city that’s empty and lifeless, sans the blood-thirsty souls affected by the rage virus.

While the film is often loud, frightening and characterized by Danny Boyle’s divisive visual style, there’s a quiet juxtaposition throughout the story that examines how we cope with unprecedented circumstances, both on our own and in the company of others. As Jim walks through an abandoned city, he repeatedly yells “HELLO!” and is answered by nothing but echoes. He eventually encounters other survivors—most notably a makeshift family he forms with Selena (Naomie Harris), and father/daughter Frank (Brendan Gleeson) and Hannah (Megan Burns)—leading 28 Days Later to highlight humanity over catastrophe. Of course, shit hits the fan once again as the film enters a climax of alarming escalation, but the story emits a powerful refrain throughout: all we have is each other.

As the world begins to practice social distancing, quarantines and isolation, we must be reminded of this. COVID-19 is not a rage-inducing virus, but it’s still a dangerous one and the contagion factor is strong. The goal is to not reach the post-apocalyptic fantasy of films like 28 Days Later, and the fact that the line between fiction and fact has increasingly become blurred is disturbing, to say the least. This leads us to the 2007 sequel, 28 Weeks Later, which shows us where we may end up if this virus continues to spread its deadly infection throughout the globe.

With a safe zone established in London by NATO military forces after the virus has been contained, Juan Carlos Fresnadillo’s follow-up shows us a police state where life is nothing like it used to be. It shakes us with the realization that normalcy is over for every character in the film, but like its predecessor it once again scrutinizes how important we are to one another in times of crisis. The soul of the film is the relationship between a sister and her younger brother, Tammy (Imogen Poots) and Andy (Mackintosh Muggleton), who consistently rely on each other to survive another outbreak and the increasingly shocking response by the safe zone’s military in battling against it. When General Stone (Idris Elba) orders his soldiers to indiscriminately target both the infected and the innocent alike, that’s when 28 Weeks Later enters territory that is perhaps the scariest thing within the two films combined.

This started with us, and it can end with us, too. If films like 28 Days Later and 28 Weeks Later can teach us anything about our current pandemic, it’s that how we react is crucial for survival. And more importantly, how we operate in a context beyond ourselves. Imagine the people suffering and dying from this horrible outbreak were coming for you in fits of bloody rage after being infected. Would you still be lining up to get into a crowded bar? Stay home. Stay healthy. Stay human.