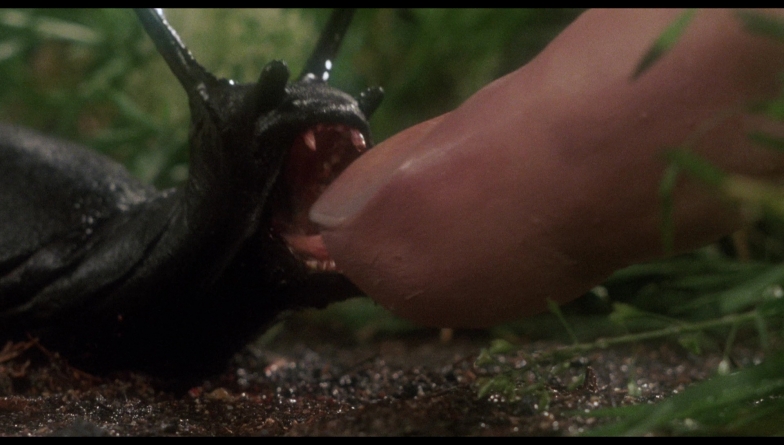 Slugs could have gone even further and opted to cut out awkward exposition and dialogue in favor of more people getting torn to shreds by squirming goo.

Virtually every nature-runs-amok B-movie is derivative of The Birds. Most post-1977 entries owe a huge debt to Jaws. Juan Piquer Simón’s 1988 cheapie, Slugs, has no intention of hiding these facts. Opening with a poorly dubbed scene of a young man on a fishing boat being dragged underwater by carnivorous gastropods and resurfacing as an eruption of blood, Slugs cuts to an opening credit sequence with a Hitchcockian theme that closely mirrors Bernard Herrmann’s Psycho score. What’s more, when the titular creepy crawlies emerge in oozing droves, they seem to ominously chitter and chirp.

While Slugs scrapes the bottom of the barrel for these sorts of natural horror films, a subgenre that had already churned out the likes of Frogs (1972), Dogs (1976), Grizzly (1976), Tentacles (1977), The Swarm (1978), Piranha (1978), and Alligator (1980), its not without it’s preposterous midnight movie charm. And that’s due largely to gleeful gore and a plot that doesn’t beat around the bush before assailing its small-town denizens with slow-moving, gelatinous menace.

To the extent there’s anyone among these wooden characters to root for, it’s the curiously named Mike Brady (Michael Garfield)—because “Ward Cleaver” would be ridiculous. Mike’s a county health inspector, and when a local couple dies in a freak slug-induced greenhouse explosion, he’s on the case for some reason. Turns out the entire area used to be a toxic waste dump. If there’s one thing to know about toxic waste, it’s that any benign creatures that encounter it will inevitably be transformed into killing machines, even those that can typically be dispatched with a sprinkle of table salt. How do slugs manage to infiltrate people’s homes in such numbers that they strip flesh down to the skeleton like a frenzy of hungry piranhas? They’re in the city’s water supply, you see, and as Mike implores the obstructionist bureaucrats who won’t take the man-eating slug threat seriously, “We’ve got to contain them to the sewers or we don’t stand a chance!”

Thankfully, a local scientist with a British accent discovers a chemical agent that makes moisture explode, so juicy slugs are no match for it. The trick is getting it down into the powder keg of a sewer without it going off. Along the way, the slugs wreak havoc on the oddly white-collar townsfolk, all of whom (including the sheriff and mayor) seem perpetually sarcastic and irascible, even as they sip cocktails and tuck into fancy dinners while cracking wise at each other. Turns out that the slugs have even ruined dinner; when one that’s actually doing normal slug-like things inside a head of lettuce gets sliced up and served in a salad, the crazy worms in its bloodstream end up bursting out of a diner’s eye socket like they were spring-loaded.

There’s some B-movie mileage here in taking one of nature’s least threatening (if perhaps ickier) creatures and making them into monsters. Despite one of the most uneven soundtracks imaginable, juxtaposing a suspenseful Hitchcockian theme with peppy cornball bullshit, the slug clusters’ sluicing noises and inexplicable chirps do manage to create an unnerving atmosphere at times. Wisely not scrimping on the gore, Slugs could nevertheless have gone even further, and opted to cut out awkward exposition and dialogue in favor of more people getting torn to shreds by squirming goo.