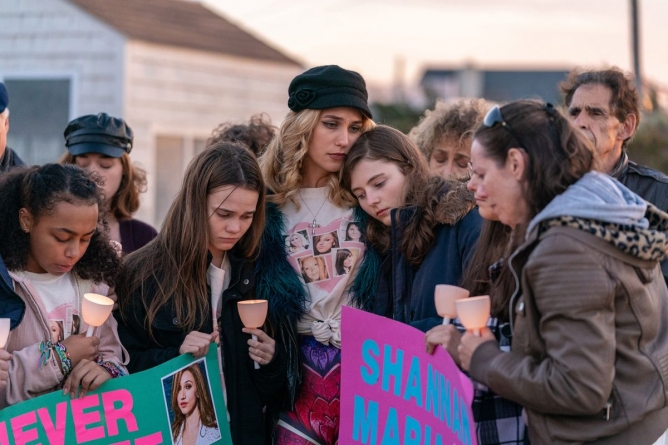 Shows how nonfiction filmmakers have just as much grasp on narrative beats and emotional manipulation as fiction ones.

Liz Garbus, known for hard-hitting documentaries like The Farm: Angola, USA and Ghosts of Abu Ghraib, brings her investigative approach to Lost Girls, a true-crime dramatization of the 2010 disappearance of 24-year-old Shannan Gilbert and her possible connection to a string of murders uncovered in Long Island. This true-crime drama is steeped in the grit of working-class anxiety as much as the maternal fear of Shannan’s mother, Mari (Amy Ryan). The film is structured not only as a series of revelations about Shannan and her family history but as Mari’s constant struggle to be taken seriously by authorities who view her as little more than white trash, a gnat who keeps buzzing in their ears when they’d rather just move on to a more exciting case.

Garbus rapidly establishes the stakes with a plunging realization that something is wrong when Shannan, who calls her at the top of the film to say she’s coming home to visit, never shows. Deftly, the filmmaker balances the quotidian acceptance of the young woman’s lateness with the budding sense that something is wrong as Mari’s middle child, Sherre (Thomasin McKenzie), gets a call from Shannan’s boyfriend asking if they’ve seen her and Sherre makes several calls to her sister that all go to voicemail. The tensest part of any disappearance drama is always that initial stage when one does not know yet whether to panic, and Garbus handles the increasing certainty that Shannan is in trouble with economic editing and pacing that goes to show how nonfiction filmmakers have just as much grasp on narrative beats and emotional manipulation as fiction ones.

From the moment we meet Mari, walking into her shift as a waitress and immediately cussing out her manager for cutting her hours, her confrontational hardness and her precarious living situation are obvious, and she responds to the understanding that her daughter is missing with bullish intensity. Meeting the usual resistance from police who will not open a missing persons case until several days have passed, Mari becomes a fixture at the local station, to the point that the commissioner, Richard Dormer (Gabriel Byrne), has to personally intervene to try to calm her. Dormer assures her that the police will do all they can to help, but any breakthroughs that they ever have in her case seem to come by pure chance, as when one cop stumbles across a body near a construction development that soon turns up several dead women.

Indeed, the cops appear to spend more time looking into reasons to dismiss Shannan entirely than they do finding her. Garbus parcels out information about Shannan with delicate care, such as the revelation that she had five different cellphones, or that strangers keep calling Mari’s home looking for her. In short order, the police say the quiet part out loud, that Shannan worked as an escort, and nearly every officer in the precinct tacitly takes this as a cue to stop caring, having succeeded in their goal of proving she is not an innocent who must be tracked down. Desk jockeys at the precinct even start to snigger at Mari when she comes to the station for updates, barely trying to mask their amusement at the woman living in denial of her daughter’s occupation. A blatant disregard runs through the film, one that updates the detective film for the current true-crime resurgence in which people are broadly engaging with police neglect. Here we do not see a dogged, even obsessive investigation by a committed cop but a search for the conclusion of least resistance, one that allows the police to dismiss both the dead sex workers discovered and Shannan’s absence. In that sense, Lost Girls fits with another recent dramatization of callous justice, Richard Jewell, in demonstrating the norm of police looking for the simplest conclusion rather than the correct one.

This prompts Mari to do her own digging, even joining up with the relatives of the dead sex workers to get answers from the private community where the bodies were found and where Shannan went missing. The deeper Mari digs, however, the more the police turn on her as well. While other cops don’t bother to hide their disdain for the woman, Dormer regularly seems a voice of reason with empathy for Mari. Soon, however, he uses his calming voice to start lobbing accusations at the woman, referencing Shannan being placed in foster care as a child and making similar insinuations about her fitness as a mother. Shannan’s disappearance gradually becomes a referendum on Mari, not a manhunt for an abductor and killer.

At times, the film can approach this dryly, and with a matter-of-fact aesthetic that leans too hard on metallic color tones and the ultra-sharp contrasts of digital cinematography. Garbus also doesn’t get as much out of the dynamic between Mari and the other grieving mothers as she might have, largely simplifying the split between the other women’s acceptance of their loved ones’ professions and their quiet grief and Mari’s caustic refusal to acknowledge Shannan’s work or fate. Only Kim (Lola Kirke), the sister of one of the dead sex workers, meets Mari’s bluntness with her own, but after their first few, testy interactions they largely settle into a shared bitterness.

Still, as blunt as the film can be, Garbus shows a facility for giving the actors space enough to explore the subtler contours of their characters’ behavior. Ryan has always been a demonstrative character actor, but there are many times here where Mari’s brash antics give way to moments in which Ryan plays up Mari’s tacit fears and guilt over being a bad mother. Likewise, McKenzie plays Sherre as sharply observant, often staying silent as her eyes dart back and forth while listening to conversations. Sherre occasionally blasts her mother’s denial, but McKenzie gets the most judgment out of the ways that the girl picks up on what’s left unsaid by both Mari and the police, and it’s in her increasingly despairing understanding that the film’s true heart lies.