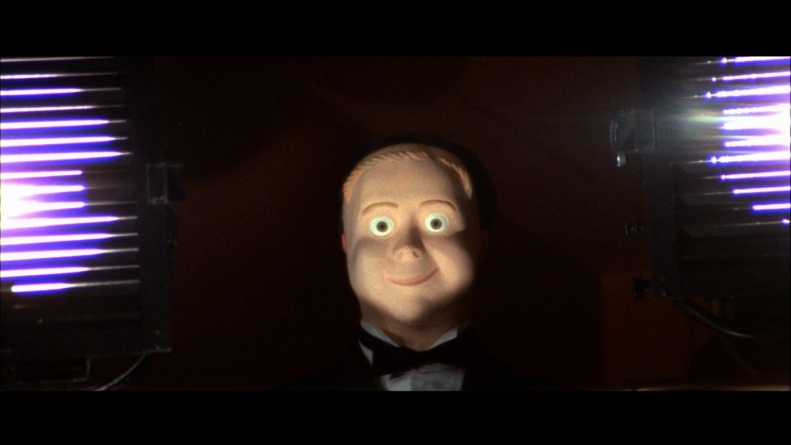 Sets up the eye-popping collision of color, gore and glamour that would form the foundation of Argento’s more substantive works to follow.

As a director of outré, often nonsensical genre fare, Dario Argento is nothing if not stylish. As required for any respectable purveyor of snazzy ‘70s Italo-trash, he possesses an unerring eye for the thin line between the beautiful and the grotesque, riding this border in a manner that makes scuzzy, colorful bloodshed feel like something to be entranced by, rather than look away from. It’s this approach, which understands the primal appeal of violence and caters to it through a mix of splashy effects and outright absurdity, that sustains Four Flies on Grey Velvet, a farcical exercise in hippie-sploitation operating off the pulpiest of giallo plotting. The combination of ostentatious visuals, gonzo camera work, and a bizarre cast of characters assures that it’s a wild ride from beginning to end, the inanity of the entire enterprise folded in as part of its twisted charm.

The story revolves around Roberto (Michael Brandon), a shaggy-haired drummer in a band of equally hirsute young men, the core unit of a movie in which every person under 30 looks like a model. Living off the inherited largesse of his equally chic wife Nina (Mimsy Farmer), he occupies a sprawling pad decked out with mod affectations, hosting large get-togethers of similarly attired friends. After a rollicking jam session in which Argento manages to stick a camera into every crevice of the room, including the inside of an acoustic guitar, Roberto finds himself menaced by a stalker, who he makes the poor choice of pursuing. Things only get worse from here.

It’s at the culmination of this chase that the film’s true antagonist reveals themself. In keeping with the genre trope of quietly menacing, perpetually obscured villains, Roberto’s adversary is a figure in a cheap plastic mask (its resemblance landing somewhere between Tintin and Thomas the Tank Engine) who shows up once the encounter with the stalker proves a trap, the man stabbed to death with his own knife as the masked scoundrel snaps photos of the entire encounter. They use these as blackmail, while continuing to draw the web around Roberto tighter and tighter, leading to one elaborately staged murder after another as his friends and confidantes are picked off.

Four Flies on Grey Velvet represents Argento as a director still relatively early in his career, gearing up for his greatest films a few years on. As such, it contains the seeds of ideas that would later present more effectively in works like Suspiria and Inferno, particularly the concept of an aging, sclerotic European society striking back against the progressive notions of the young. It seems fitting then that first murder occurs in the hulking ruin of a 19th century opera house, a direct line drawn between Roberto’s boundary pushing funk stylings and older forms of musical expression.

Yet as with many films of this genre, none of these undertones amount to much, the thin patina of ideas serving as more shiny varnish atop a series of thinly linked stylistic flourishes. This quality is summed up by the repeating dream image of a man being beheaded in a Saudi city square, stemming from a story relayed by one of Roberto’s friends as a whimsical travel anecdote, which clearly ingrains in the troubled man’s brain, repeating in greater and greater detail as he loses his grip on reality. A film more fixated on political subtext might make this memorable scenario the centerpiece of its assault on regressive conservatism, tying its own world to the grimmest excesses of an authoritarian religious state. Four Flies on Grey Velvet is not that film, but its focus on pure visual virtuosity yields its own rewards, and sets up the eye-popping collision of color, gore and glamour that would form the foundation of Argento’s more substantive works to follow.