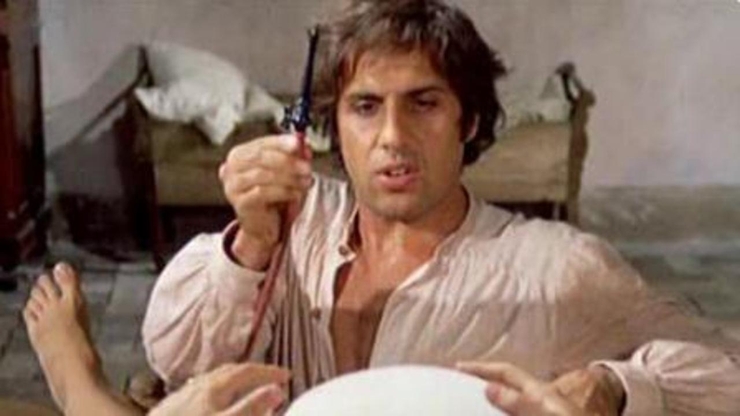 On what planet does anyone want “an average period piece” from Dario Argento?

Although he has been much-lauded for his signature style, Dario Argento tossed much of that away in The Five Days, his ill-conceived, quasi-historical comedy from 1973. The film explores one of the many revolts against the Austrian Empire in 1848, following the events in Milan from the perspective of two bit players: thief Canazzo (Adriano Celentano) and baker Romulus (Enzo Cerusico). These hapless protagonists trip, fall and run their way through a series of exponentially more absurd shenanigans, traversing the uncertain terrain in a method splitting the distance between satire and farce.

Tonally, it’s not far removed from the specific sense of humor Argento displays in the rest of his filmography, but having this pseudo-comic approach laid bare outside of the genres he usually plays in leaves Argento awkwardly exposed. Riffing on the complex politics of an important historical Italian event is a fine starting point for a film, to be sure, but the execution is messy and a bore. For every semi-decent play at physical comedy, like the sequence where the two men must help a pregnant woman give birth on the top floor of an apartment building after carrying her through the stairs, there’s scene after scene of political commentary so blunt and overt that it morphs into abstract and meaningless window dressing.

The Five Days isn’t without its charms. There’s a point where the entanglements Canazzo and Romulus find themselves in smoothly shift from sitcom hijinks to unequivocal life and death scenarios, and the weird friendship that’s formed between the two men allows for the audience to fear for their safety. The transition allows for some potent moments of tension and pathos, but along the way there’s so much repetitive chicanery that it comes off like a lazy cartoon.

Revisiting the film all these years on, the biggest story is how absent Argento’s assured hand seems to be. It’s not like every giallo he made was perfect, but within the genre trappings he’s most comfortable in, individual films’ missteps are more forgivable for the undeniable spectacle Argento provides. Even when the plots are labyrinthian and the motifs monotonous, there’s at least a surfeit of aesthetic to feast on. But here, Argento’s chiaroscuro lighting and kaleidoscopic use of color are nowhere to be found. The film is staged with some engaging movement, sure, and some of the more dramatic moments play out with interesting use of slow motion, but it’s still a dull portrait to behold. The drab color scape, muddy browns and flat hues, all feel appropriate for the average period piece, but really, on what planet does anyone want “an average period piece” from Dario Argento?