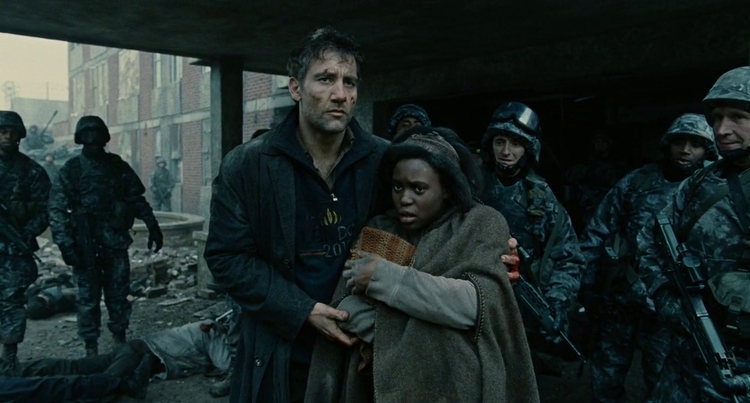 Children of Men remains a striking and all-too-plausible parable of humanity pushed to the brink.

Amid a global crisis, it’s funny how quickly the previously unfathomable can become the new normal. As the world hunkers down to combat the spread of coronavirus, revisiting Alfonso Cuarón’s 2006 dystopian action-thriller Children of Men in this climate highlights how unexpected biological threats coupled with widespread systemic failures, once the stuff of speculative fiction, are now a clear and present danger. Fourteen years ago, the film’s premise was compelling but relatively far-fetched: that in the wake of an influenza-like pandemic, civilization has broken down and humans face extinction due to mysterious decades-long human infertility. Few governments remain intact, radiation plagues the globe and refugees pour into places like the United Kingdom, one of the world’s last remaining nations holding it together (albeit as a police state).

Of course, in Children of Men’s not-too-distant future of 2027, the denizens of a post-apocalyptic London can also safely shake hands, congregate in groups larger than 10 and ride public transportation without a drop of hand-sanitizer in sight, so all things are relative. Some elements of this film feel unnervingly prescient, such as asylum seekers kept in cages, something fairly unimaginable even during the misguided war on terror but sadly commonplace in our xenophobic present. Other aspects clearly serve as commentary on the international controversies of the mid-aughts, particularly one brief, striking image of a hooded prisoner standing on a box while hooked to electrical wires, a direct reference to the Bush-era torture scandals of Abu Ghraib.

At the center of the chaos is government bureaucrat Theo (Clive Owen), who’s kidnapped by militant revolutionaries fighting for the rights of immigrants, here referred to as “fugees.” Turns out that Theo’s estranged wife, Julian (Julianne Moore), leader of the group that calls themselves the Fishes, is behind the kidnapping in order to compel him to assist in transporting a vulnerable young fugee named Kee (Clare-Hope Ashitey). In a fast-paced action film such as this, there’s little time for character development amongst the gunfire, explosions and burning vehicles, so Cuarón, who also co-wrote the script, relies on heaps of exposition and heartstring-tugging contrivances. For instance, Theo and Julian split up due to one of storytelling ’s laziest tropes, a dead kid, here killed during the pandemic. Meanwhile, Theo seeks assistance from his eccentric friend and pot dealer Jasper (Michael Caine), who cares for a catatonic, dementia-stricken wife in his secluded home.

When Julian is killed in a forest ambush, Theo presses on, in large part because Kee reveals to him that she is heavily pregnant, a miracle after 18-plus years of global sterility. As the Fishes clearly don’t have Kee’s best interests at heart and intend to use her wondrous pregnancy for their own revolutionary ends, Theo escapes with Kee and her caregiver (Pam Ferris), inciting the Fishes’ new leader (Chiwetel Ejiofor) to come after them with all he’s got. By the film’s third act, Kee is giving birth in a literal warzone, after they are smuggled into a refugee camp. Having utilized many elaborate single-shot action sequences—such as in the gritty and tense forest ambush and its subsequent chase scene—Cuarón saves the most impressive of the lot for last, as Theo, Kee and baby escape a military siege. As mortar shells obliterate walls and frenzied gunfire erupts within the building’s corridors, the violent pandemonium falls silent as soldiers and uprising refugees alike discover that Kee carries a swaddled infant, and hope for humanity, within their midst. The moment that the baby is out of harm’s way, the maelstrom resumes.

Children of Men succeeds due to a compelling premise, sharp editing and especially its breathtaking cinematography, which earned director of photography Emmanuel Lubezki an Oscar nomination. These kinds of long unbroken shots (or at least the appearance thereof) were less common in 2006, with the technique becoming more of an artistic mainstay in recent years thanks to films like Birdman, 1917 and Cuarón’s own 2013 outer-space spectacle Gravity, for which Lubezki won an Oscar for his cinematography and Cuarón won his first for directing. The film anticipates some global crises that have come to fruition in recent years, and provides a distinct vision of our species in the throes of imminent extinction. An overemphasis on action sequences and unfortunately weak character development—even the amusing turn by Michael Caine as a hippie feels archetypal—may prevent the film from reaching the philosophic heights it could’ve otherwise achieved, but Children of Men nevertheless largely remains a striking and all-too-plausible parable of humanity pushed to the brink.