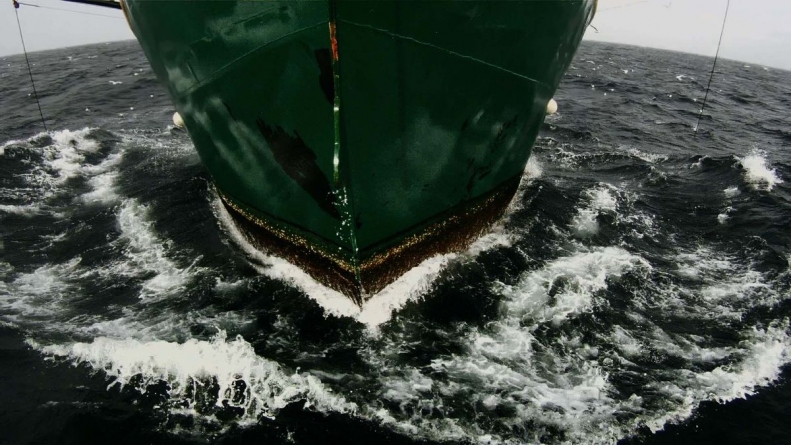 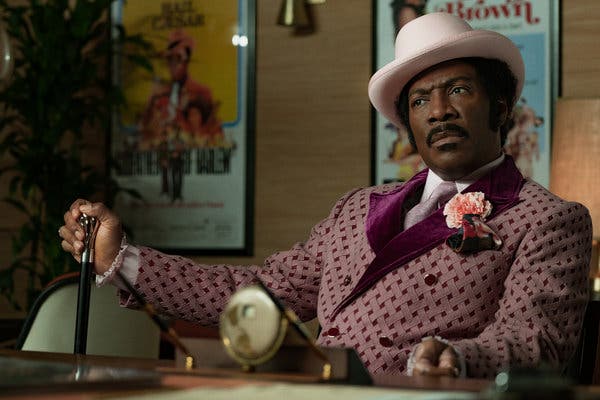 Dolemite is My Name [Streaming on Netflix]

Eddie Murphy was the funniest man alive when he was on “Saturday Night Live” in the early ’80s. As a kid with a bedtime, staying up late to catch his sketches was a transgressive thrill, and watching his raunchy standup specials, Delirious (1983) and Raw (1987), felt like doing illicit drugs. He was supernaturally profane and a comedy genius, and it was a bummer to see him sort of fade away into middling Hollywood comedies for the next two decades. That’s why it’s such a joyous thing to see him come roaring back to himself in the Netflix comedy Dolemite Is My Name. Based on the true story of Rudy Ray Moore, Murphy plays a wisecracking schemer who’s always gaming some way to break into the big-time as a comedian, musician or whatever will get him the attention that his exuberant personality craves. He manages to build a following in his LA neighborhood by putting out his foul-mouthed stand-up routine on records that he sells out of the trunk of his car. He’s a scam artist and a shyster for sure, but he’s also funny and charismatic with some super-fly outfits, and the great pleasure of the movie lies in how Murphy makes such an obnoxious character sympathetic. His scheme to produce a low-budget (and seemingly incoherent) kung-fu/comedy/sex movie brings together a rich cast of characters played by a who’s-who of African-American comedy stars: Craig Robinson, Keegan-Michael Key, Tituss Burgess and Wesley Snipes, to name just a few. But the best part is watching Eddie Murphy’s face split into that galaxy-wide grin that whooshes me back to those days of sneaking into the dark living room to watch SNL with the sound turned low and Eddie Murphy goofing his way through an insane parody sketch of Mister Robinson’s Neighborhood. It was hard not to wake up the whole house with laughter, and what a wonderful feeling that is. – A.C. Koch 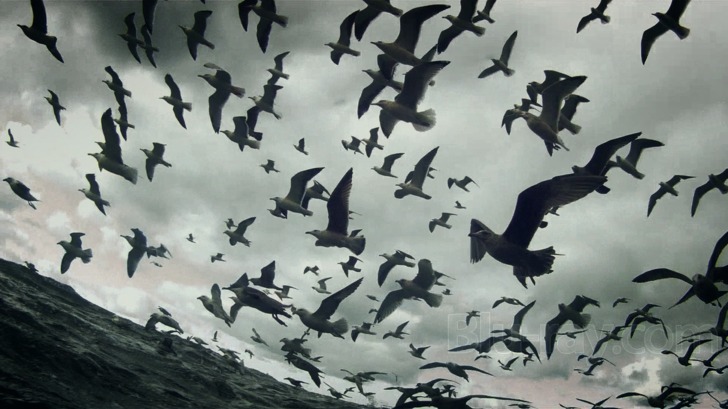 This 2012 documentary is a largely wordless portrait of the voyage of a commercial fishing trawler. In its depiction of the massive, complex ship as the biblical sea monster, the film manages to create meaning both literally and metaphorically. Literally, the ship is enormous, loud and devastatingly efficient at harvesting the life of the sea surrounding it, much like the mythical Leviathan. Metaphorically, the ship is the pinnacle of human engineering and social organization, both a boon to the humans who need the protein it extracts from the ocean as well as a blight on the environment with its noise, dirty fuel and destructive methods. Capitalism is as much the Leviathan as the ship is, and, as with all good monster flicks, the real monster is human voraciousness. For those not interested in broad-ranging metaphor, Leviathan is a voyeuristic pleasure revealing the intricacies of commercial fishing and the demanding human labor that makes it possible. You will never look at a scallop the same way again. – Ryne Clos 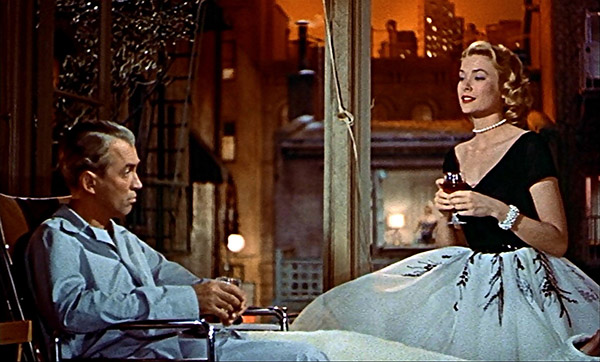 Living in a large apartment building puts one in a situation where one is privy to overheard conversations about neighbors’ personal lives with little in the way of context. That unintentional voyeurism only gets worse when one spends literally all of their time trapped in one’s apartment. This is a long way of saying that I kind of get what L.B. Jefferies (James Stewart) is going through when Rear Window opens. He’s trapped at home with a broken leg; he longs to return to working as a photojournalist, and his main way of keeping himself occupied is to observe his neighbors from the window overlooking the courtyard of his Greenwich Village apartment. Hitchcock creates a languid portrait of urban monotony as he portrays the routines of people’s lives from the perspective of someone who has nothing better to do than observe. One gets lulled into a sense of safety where the only thing we feel is pity for Jefferies, and even that’s undercut by his dismissive attitude towards his girlfriend Lisa (Grace Kelly in one of her best roles).

Naturally, since this is a Hitchcock movie, things inevitably get more complicated than they initially seem. What’s striking is how Hitchcock turns up the tension in a very minimalist way: there’s nothing in Rear Window that’s quite like some of the more elaborate set pieces in North By Northwest or Vertigo, but the film is about the most white-knuckle tense thing Hitchcock ever put to film. Even now, when most of its twists and reveals are part of pop-culture DNA, the film manages to keep one ill at ease as Jefferies and Lisa get more and more in over their heads investigating the sinister goings-on across the courtyard. I think it’ll be a while before I can trust my neighbors again. – Kevin Korber 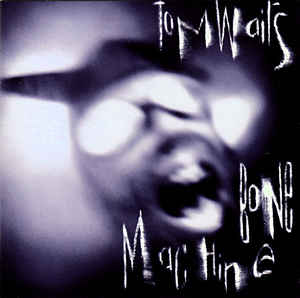 I blame Tom Waits for how I turned out. How could one listen to his music as a teenager and not be changed irrevocably in some way? I am embarrassed to retell my first encounter with Waits’ music. It was the early ’90s and I was shopping for CDs in New Hope, Pennsylvania. Waits’ telltale voice came on and I remember exclaiming to my friend, “Man, someone is doing a really shitty cover of Rod Stewart’s ‘Downtown Train.'”

Then I watched At Play in the Fields of the Lord, Hector Babenco’s 1991 adaptation of Peter Matthiessen’s novel. The film starred a veritable who’s who of ’80s and ’90s stars: Tom Berenger, Kathy Bates, John Lithgow and Daryl Hannah. Yet, it was Waits’ cameo in the beginning that intrigued me most. Who was this guy that got front-of-the-VHS-box billing? “I think he’s a minstrel of some sort,” my friend, Brian, said.

Cue 1992. Brian and I were shopping in a music store in Doylestown and came across a copy of Bone Machine on cassette. Pooling our resources, we split the tape, popping it in the stereo on the way back. From the apocalyptic opening refrains of “Earth Died Screaming” to the epic slurred/sing-along with Keith Richards of “That Feel” at the end, that car ride changed my life, my musical tastes and how I see the world. I let my friend buy out my half of the tape and rushed out to get the CD.

Twenty-eight years later, I am sitting in my house, the world in the throes of a real-life apocalypse. I am listening to a long-out of print Bone Machine LP that I paid some guy in Germany $100 to obtain (Bootlegs abound! Be careful!). Is it the comfort I feel of that car ride nearly three decades ago, the embrace of a simpler and more innocent time. Or is it the fear that runs through Bone Machine that chills me to the center? Who wants to grow up anyway? – David Harris 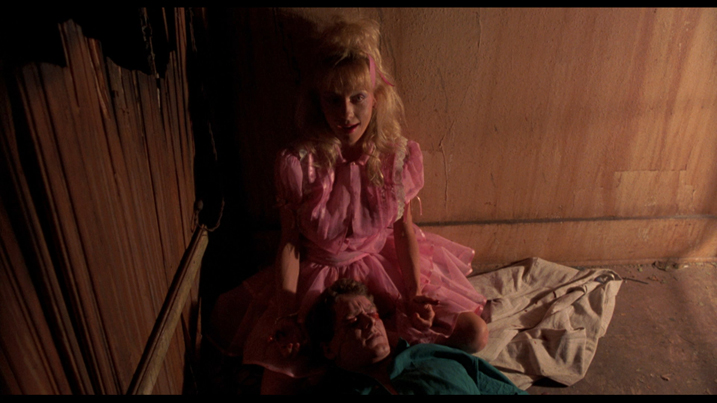 Night of the Demons [Amazon Prime]

I’ve made note of the current trend of my viewing and reading habits, taking this recent consuming of horror as a way to order terror in ways the real world doesn’t offer. The latest distraction is Night of the Demons, a slice of the sort of low budget horror movies that were all the rage in the ‘80s. This one takes place on Halloween where a group of post-high school teens decide to party at an abandoned funeral parlor that was once the site of multiple gruesome murders. A séance ensues, a demon gets unleashed, as is want to happen at such a location. As per formula, the teens are all good looking and surprisingly diverse, though there’s plenty of misogyny in this time capsule to call it completely progressive. Directed by Kevin Tenney, there are enough scares to make it worth a watch and, as per its time, lots of nudity and practical effects to distract from the thin story and bad acting. The film will never make any Top 10 lists of horror films of the decade, but it might make the top 50…definitely 75. – Don Kelly 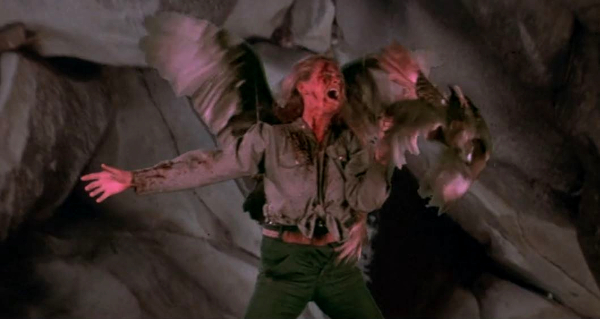 Day of the Animals

You think your dystopia is rough? This environmentally-conscious 1977 horror movie imagines what might be an even worse fate for the planet. Leslie Nielsen stars as a racist ad exec who for some reason has signed up for a day-long group hike in the mountains outside a Northern California resort town. The catch? Because aerosol sprays have thinned the ozone layer, the regional animal kingdom has gone mad. We’re not talking penguins and puppies wandering around an empty aquarium; these creatures kill, from wildcats hunting in packs to rattlesnakes mysteriously gathering in empty cars. The “Love Boat”—ready ensemble includes Michael Ansara, Ruth Roman, Christopher George and his wife Lynda Day George, but it’s Nielsen who steals the movie, building up to a shirtless climax in a thunderstorm that has him rail against God and wrestle a bear. Director William Girdler helmed such exploitation essentials as The Manitou, and makes great use of a loopy score by Lalo Schifrin and an inspired gimmick by cinematographer Robert Sorrentino, who deploys star-filters and haze to approximate the sun’s dangerous rays scalding Earth and the viewer. — Pat Padua