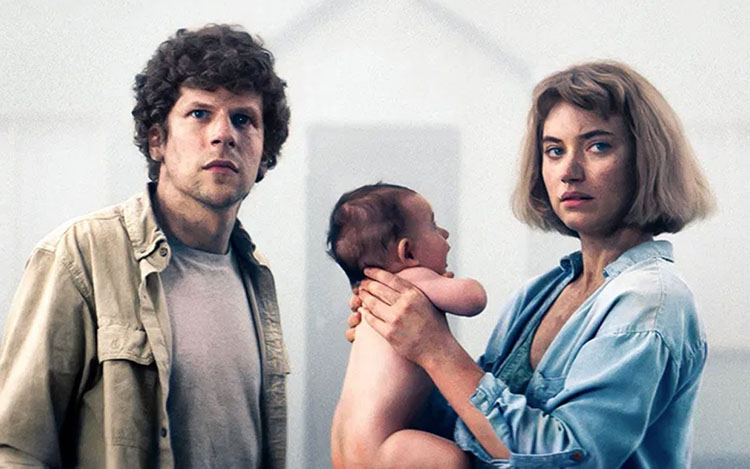 Taps a claustrophobic atmosphere that grows more relatable with each passing day.

The longer our current pandemic and its corresponding shelter-in-place orders drag on, the greater the sense that we’re trapped within our own homes. The silver lining to this, of course, is that home is meant to be a place where, more often than not, we have access to comfort. Not so in sci-fi thriller Vivarium, when a house-hunting young couple become trapped in House #9 within a uniformly designed, inescapable suburban dreamscape that owes an aesthetic and conceptual debt to Tim Burton and Rod Serling, respectively.

Serving as one of the more on-the-nose satires of domesticity imaginable, Lorcan Finnegan’s sophomore feature first appears to deride the oppressive conformity of little-boxes-style suburban sprawl, each tacky home identical and lined up all in a row. When Gemma (Imogen Poots) and Tom (Jesse Eisenberg) first try to depart from a bizarre house-showing in new development Yonder and instead find themselves caught in an otherworldly infinity loop that always leads back to House #9, they think they must just be making wrong turns. The creepy real-estate agent (Jonathan Aris), who presents as a mix between a door-to-door missionary and a glitchy android, is nowhere to be found, so when their car runs out of gas in front of (where else?) House #9, they’re forced to stay the night. With no way out, a frantic Tom eventually tries to burn down the house, but it’s magically restored by the next morning. And then packages begin to appear: first, necessary rations, and then, a baby.

At this point, Vivarium shifts to a sharply cynical take on not only the drudgery of family life but also the unyielding churn of cyclical processes and consumption of resources. The baby arrived with firm instructions that only if the couple successfully raises the child will they be freed from their surreal captivity. The clearly inhuman boy (Senan Jennings) grows rapidly, reaching grammar-school age in less than 100 days. His oddly pitched voice seems plucked straight from the uncanny valley, and even more unnervingly, he has a tendency to precisely mimic his “parents.” Like an infant, the boy unleashes a piercing shriek whenever he is hungry or uncomfortable or bored. He oscillates between being a tormenter, alien observer and disarmingly needy child.

Unfortunately, at this point, Vivarium’s compelling setup begins to unravel into a tangle of well-worn tropes. Gemma, in spite of herself, can’t help but develop a maternal instinct toward the boy-creature, even as Tom wants to starve it while it’s still small and weak. This drives a wedge between the persecuted couple, so when he’s not berating her, Tom fixates on what appears to be Yonder’s lone flaw: a torn patch of his prefabricated lawn that allows him to incessantly dig a deep hole in a futile attempt to escape.

Vivarium never fully capitalizes on its wildly intriguing setup, losing steam in its third act as it begins limping toward its inevitably bleak and largely telegraphed conclusion. Though Poots gives a dynamic performance of a conflicted woman in an impossible situation, Eisenberg’s cerebral, nervous energy seems underutilized here, as he’s mostly just uniformly obstinate or aggressive. Nevertheless, on the whole, the film successfully taps into a sense of domestic unease and quotidian futility through a claustrophobic atmosphere that, coincidentally, grows more relatable with each passing day of quarantine.