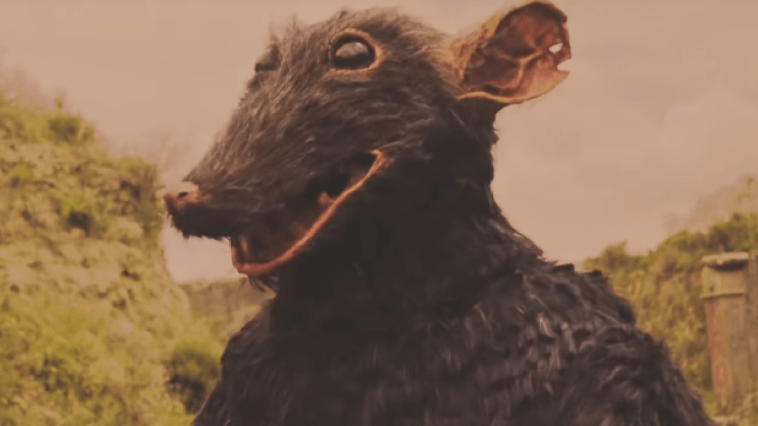 Anyone with a strong stomach and a sense of humor will find something to love in Mutant Blast.

Fans of B, C, and D-list movies will recognize Troma Entertainment, which has been producing delightfully schlocky films since the 1970s. The most famous of these is The Toxic Avenger, whose titular character now serves as the studio’s mascot. A number of famous filmmakers have benefited from Troma’s tutelage, most notably James Gunn of Guardians of the Galaxy fame. Yet Fernando Alle, who makes his feature-length directorial debut with Troma’s new film Mutant Blast after directing shorts such as Banana Motherfucker and Papá Wrestling, offers some freshness alongside the expected gore and giggles. It’s well-acted, effectively creepy, lovingly derivative and viciously funny.

The film opens with Pedro (Pedro Barão Diaz) waking up with a hangover and a dick painted on his face. In 28 Days Later style, zombies have taken over while he slept, and Pedro is quickly in a fight for his life. At the same time, a Terminator-like beefcake called TS-347 (Joaquim Guerreiro) is broken out of a secret military facility by a muscular sharpshooter named Maria (Maria Leite). All three main characters have different styles when it comes to confronting the zombie threat, which leads to a great deal of fun as we watch them fight to survive. Maria is brave and resourceful while TS-347 crushes zombie heads with his bare hands. Poor Pedro is simply out to survive, playing a human version of “Frogger” as he careens around blood-thirsty hordes of the undead. The three eventually meet-up, but then the film enters its next phase: nuclear fallout. Rather than blasting everyone to smithereens, however, the results are instead violent, funny, icky and surprising.

Mutant Blast was shot in Portugal and the nation’s arid landscape provides the perfect backdrop for the film’s proceedings. Earlier scenes of zombies traversing abandoned, sunburnt city buildings recall George Romero’s Dawn of the Dead while the later, post-apocalyptic scenes make perfect use of the desert-like surroundings.

Alle’s work here recalls that of a young Sam Raimi in that while the budget is low, the action is never anything other than balls-to-the-wall. While the effects are cheap and the costumes and make-up garish and rubbery, somehow it all still manages to be believable and, more importantly, absolutely gross. It’s also inventive; a number of surprising man-eating mutants pop up, each more shocking than the last. What starts as a relatively straight-forward zombie apocalypse morphs into wild, surprising and utterly grotesque free-for-all.

The chemistry of the leads really helps the film stand apart, as we end up genuinely caring about them and their relationships with one another. It also helps how gung-ho the cast is when it comes to the insane things they are asked to do; each of the leads is tasked with a number of nasty and unbelievable things and does so with enthusiasm and skill.

While the dialogue is clever and the imagery is creative, Mutant Blast certainly isn’t a cerebral affair. But that’s okay. It’s rare for a film to fulfill and surpass its goals so fully, and Alle and company do so in spades here. The film is genuinely funny, occasionally scary, almost always bizarre and moves along with a swift and relentless pace. That it does all of this on a shoestring budget is all the more impressive. Anyone with a strong stomach and a sense of humor will find something to love in Mutant Blast.