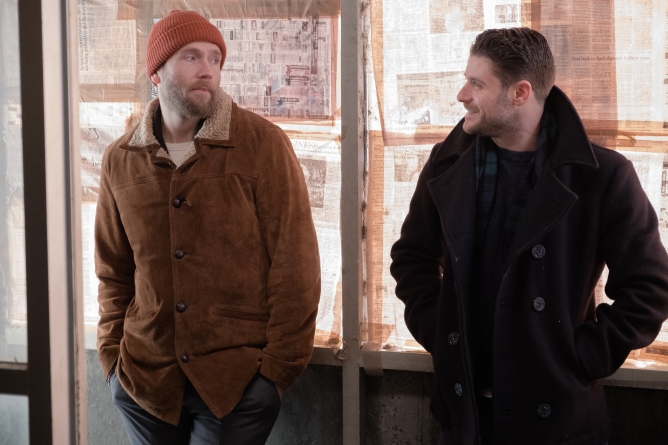 It’s as if Tarantino left production halfway through to be replaced by the Coen brothers.

You know you’re in for a darkly funny crime caper when Ron Perlman steals the opening scene, chomping on a cigar and growling about apex predators as he shows footage of wolves to unseen visitors in his shadowy den. When the scene shifts to a couple of down-on-their-luck pub owners who owe a lot of money to the mob, it won’t be long before blood is spilled. The path back to that opening scene has more twists and turns than one might expect, and Clover doesn’t end up being quite the movie it first appeared to be. What starts off as a chatty crime caper with a Motown soundtrack ends up verging into a twisted comedy of errors, as if Tarantino left production halfway through to be replaced by the Coen brothers.

Those two pub owners, Mickey (Jon Abrahams) and Jackie (Mark Webber), are squabbling brothers who are trying to avoid getting killed by the mobster they stiffed on a loan. Backed into a corner, they agree to do a “simple house call” by shaking down a mark who owes money. The visit goes wrong, guns go off, and the brothers find themselves standing over the dead mark, a dead mobster and a freaked-out teenage girl (Nicole Elizabeth Berger) whose father just got executed. The scene, like many others, features a lot of blood spattered on faces.

Because our brothers are good-hearted if bumbling hoodlums, they see no choice but to protect the girl as more goons storm in. This is enough of a set-up for a decent story, but Clover is just getting started. You might wonder if it’s a coincidence that the girl’s name is Clover, just like the symbol on the neon sign at the bar the brothers lost to the mob. You might also wonder if Mickey and Jackie are cursed with bad luck or if they generate it all on their own. Certainly, a lot more blood gets spilled before that question is settled.

Directed by Abrahams, who also plays the role of nice-guy Mickey, Clover plays with genre in ways that wink at other mob movies while throwing in some fresh angles and surprising turns. Backstory is refreshingly absent so all the focus remains on the heart-pounding present as the brothers and their sassy teen companion flee across the gloomy ex-urban wastelands of upstate New York. The comedy gets sharper as the danger grows, and Jake Weber turns in a hilarious performance as an unstable genius who will either blow everyone up or save the day.

And still, a bigger twist is coming. Suffice to say that these two brothers have no idea what they’ve gotten themselves into, and the same goes for Perlman’s cigar-chomping wolf enthusiast. After all, a real apex predator doesn’t announce its arrival but moves in silently for the kill. The brothers’ instinct is to flip the bird at all the bad luck that comes their way, but by the end, they might not have enough fingers left to do it.

A.C. Koch lives in Denver where he teaches linguistics, writes fiction, and fronts a sharp-dressed powerpop trio, Firstimers. You can find him on Twitter @henry_iblis and @firstimers3, and he blogs about books, film, and the long slog of publishing rejections (with a sprinkling of acceptances) at invisiblepony.blogspot.com.