One reason it’s difficult to discuss Spike Lee’s films solely in terms of aesthetics or pure form is that they bring so much of the real world into the movie screen. From Lee’s first feature film, She’s Gotta Have It, he never shied away from making it clear that he was a black filmmaker, and as such, it would seem to do harm to his body of work to ignore this aspect. This potentially puts white American viewers on the defensive, requiring them to examine their own privilege and the interrelated nature of race and status in America, which is an achievement that goes above and beyond aesthetics. That’s also the problem with Lee, the artist: at times, his proclivity towards pronouncement threatens to overturn his films, making them feel leaden with decades of history. The death of Pop (Ossie Davis) at the end of Get on the Bus, while genuinely felt, is so gloomy and weighty that it functions as an apt metaphor for how we occasionally relate to Lee’s work: faced with the monumentality of his vision—Pop dies on his way to the Million Man March—we often shrink away and disconnect rather than engage him on the level he wants.

With Bamboozled, this subtextual aspect of Lee’s work rises all the way to the foreground, one that is so purposefully lacking in subtlety that it’s difficult not to squirm at times. This suits Lee, even as it poses problems, because the film is Lee’s most pointed reversal of his own relationship to history: where in the past, he absorbed history and filtered it into his own films, Bamboozled reacts against this by hurling history back out the movie screen towards the viewer, bombarding him or her with it. Lee illustrates a very simple but far-reaching point about contemporary African-American life, and which may be the essence of the film: to be black in America means to navigate an endlessly complex network of images, so that your every action is always seen in comparison to them.

The film’s protagonist, Pierre Delacroix (Damon Wayans), is a well-educated black man, the kind who might be perceived as somewhat “white”: his boss Thomas Dunwitty (Michael Rapaport) asserts that he’s “blacker” than Delacroix and teases him about being out-of-touch. On the opposite end of the spectrum is Julius (Mos Def), the brother of Delacroix’s personal assistant Sloane Hopkins (Jada Pinkett Smith). Julius is the leader of a militantly black rap group called the Mau Mau (named for an African anti-colonial group), and if Delacroix is the type of black man whites presumably want more of (even if they’ll simultaneously mock him), Julius is the rebellion against this desire. But even in rebellion, Julius’ actions are defined by pre-existing stereotypes, and he is hardly as free as he imagines himself to be. 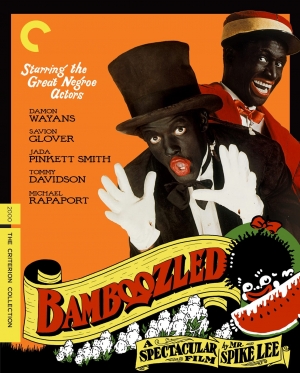 This is the crux of Lee’s exasperated and aching vision of contemporary African-American life. There’s a “damned if you do, damned if you don’t” relationship between images and reality throughout Bamboozled, the story of a TV executive, Delacroix, who pitches the idea for a new program based on minstrel shows in an attempt to keep his job and teach the world a lesson. His plan falls apart as soon as he realizes that, for the most part, people are not shocked by the concept. On the contrary, they love it: audiences even show up to the filming of the show in blackface as an homage. Lee litters his film with the most objectionable and saddening cultural depictions of blacks, and his film continually draws our attention to the costs and benefits of blacks playing into (or directly opposing) such stereotypes.

Each has its own rewards, which is what makes choosing so confusing. To star in his program, Delacroix recruits two street performers, Manray (Savion Glover) and Womack (Tommy Davidson), who are only too happy to get work. Manray in particular desperately wants to share his dancing ability with others, but one of the film’s saddest moments comes when, during the meeting where Delacroix pitches his idea, Manray gets on a table in Dunwitty’s office and proceeds to dance for everyone in the room, giving them a demonstration of his skills. Though he’s obviously a talented performer, it’s hard not to see his dancing here in the context of past African-American performers who put on similar shows in front of white audiences. There’s a tension, then, between the pureness of his artistry and the social meaning and context, which always colors any performance.

This point is illustrated again and again when we see the show itself, entitled “Mantan: The New Millennium Minstrel Show.” Some of the acts are entertaining enough if you forget their historical context—one comic sequence in which Manray and Womack finish each other’s sentences is particularly humorous—but no one watching could possibly enjoy them on that level. In this context, white privilege (especially that of straight white males) means the freedom to act in any way you want without having your actions define the identity of the groups to which you belong. By contrast, every black character in the film could be seen as the embodiment of a type, and while the same is somewhat true of the white characters—Dunwitty is the supposedly “urban” white guy who idealizes black masculinity—there are really no repercussions for them because they still exist as individuals beyond their identities.

What made Lee’s Do the Right Thing such an artistic and political achievement is the way it portrayed each character as a larger-than-life individual, one aspect of a larger tapestry that, taken together, showed you what a community looked like, with each component as essential as the next and all collectively taking on a mythical aura. Difference creates cohesion, and the film’s terrifying finale centers less on conflict between whites and persons of color than on the intrusion of an outside force (the police) into the community. Beyond Do the Right Thing, Lee’s filmmaking is focused on the way groups create tensions, whether they be the different faces of blackness in She’s Gotta Have It and School Daze or the conflict between groups, such as in Jungle Fever and, of course, Malcolm X (which ends after its hero realizes that harmony between races is possible).

In this context, Bamboozled is something like the inversion of Get on the Bus, which depicted a vibrantly diverse community of black males. This group succeed in embracing their differences largely because they were unified in the shared journey to the Million Man March and protected from the judgment of outsiders by their shared blackness. They exclude from their community their white, Jewish bus driver (Richard Belzer) and then kick out a proudly Republican black man (Wendell Pierce) who repeatedly denigrates the other passengers. Collectively, they are able to enforce the boundaries of their temporary community, growing stronger together and expressing divergent black identities (including those of two very different black gay men).

In Bamboozled, there is no equivalent to this safe space of “blackness.” Instead, every action, whether intended as a direct expression of blackness or not, is rerouted through years of cultural attitudes and stereotypes about blacks. This is indicated in the way that, throughout the film, Delacroix’s office becomes increasingly filled with his collection of racist cultural artifacts, which come to have a suffocating effect on the film’s mise-en-scène, choking the frame with memories of a disgraced past. Delacroix began collecting these primarily as research to inform the satire he thought he was creating, but when, in order to continue with his work, he must defend his own minstrel show, the artifacts become oppressive and constricting, casting doubt on whether stereotypes really can be attacked in such a direct manner. Stereotypes exist for a reason, serving as props for the continued disparity in privilege between one group and another, and it becomes dangerous to perpetuate them even if the intent is to demolish them. By the end, it’s not even clear that this is Delacroix’s goal.

The film ends with a stomach-turning montage of vile and racist imagery from Hollywood films and cartoons of the early part of the 20th century, and the collective force of this should fill any decent viewer with sadness and regret. Above all, this montage calls into question Delacroix’s faulty premise of using these very images to satirize contemporary racial politics. In doing so, Bamboozled reveals that perhaps freedom from these images, and the stereotypes and expectations they bring with them, is not wholly possible for blacks. But it still remains possible to strive to live one’s life apart from them, neither playing into them nor actively rebelling against them. Bamboozled suggests that, as a black filmmaker, Lee desires this above all else, reminding us again that what we are watching are not “just” movies but also sites of cultural history and meaning.

[xrr rating=3.5/5]We don’t spend very much time at all with the parents or guardians…