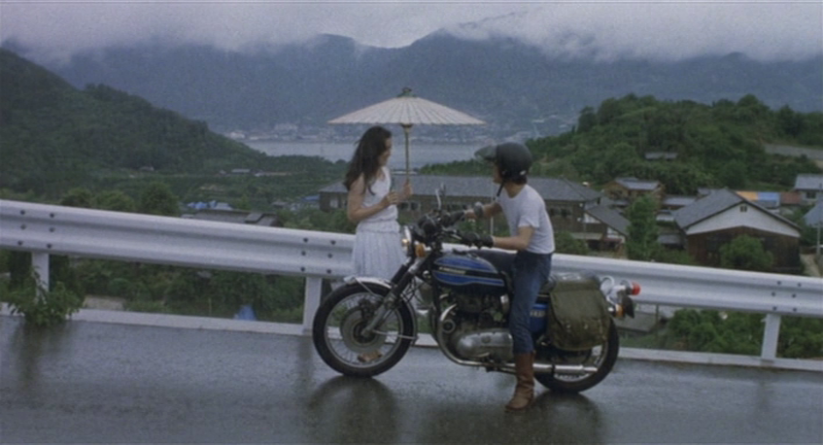 A rollicking ‘50s urban-outlaw throwback movie which underplays the societal friction angle in favor of a heady atmosphere of romantic longing.

A nation with more than its share of strictly coded subcultures, Japan has for decades boasted a robust biker community, the popularity of which peaked in the early 1980s. This world forms the basis for His Motorbike, Her Island, a rollicking ‘50s urban-outlaw throwback movie which underplays the societal friction angle in favor of a heady atmosphere of romantic longing. That biker culture, known as Bōsōzoku, is represented here by a small clique of hard-riding messengers, kitted out with Kawasakis, knee-high boots and greaser hairdos. Central among them is Koh (Riki Takeuchi), a part-time student with a job whizzing crime-scene photo-film back to newspaper offices through dense Tokyo traffic.

After breaking it off with his sensitive songwriter girlfriend Fuyumi (Noriko Watanabe), Koh endures a chastening beatdown from her brother, the head of his group, and sets off on a long country ride to clear his head. Here he runs into Miyoko (Kiwako Harada), who seems more attracted to his bike than him. He’s largely uninterested in her technical questions about the vehicle until a second encounter at a mountain spa, where she bounds around naked, challenging his newly celibate stance. After he returns to Tokyo, the two enjoy a brief telephone flirtation until she invites him out to visit her home island in the Inland Sea, just in time for the yearly Obon festival, which has draped the already picturesque enclave in ravishing local color.

Simply plotted and relatively straightforward despite a few significant formal curlicues, His Motorbike, Her Island is nevertheless a difficult movie to write about, particularly for the way in which its deepest pleasures remain entirely ineffable, buried in a drift of tactile texture and perfectly expressed sensations. Much of this is rooted in the matchless style of director Nobuhiko Ôbayashi, who died this month at the age of 82, months after releasing his final feature. Making his name with a slew of effervescently constructed, vibrantly realized, youth-oriented movies, starting with 1977’s Hausu, Obayashi cemented his reputation as an auteur in the period leading up to the creative peak attained here.

In His Motorbike, Her Island, he further fine-tunes that mixture of boundless creativity and fine technical control, shuffling aspect ratios and flipping between black-and-white and color, a seemingly scattershot approach that meshes with the thicket of post-adolescent emotions on display. Formally audacious from it’s opening moments, on through a cryptic conclusion that clarifies the film’s split structure, it masterfully juggles dueling impulses toward manic speed and quiet contemplation, embodying the combined restless confusion and unvarnished passion of youth. The feeling of racing down a mountain road thus becomes neatly counterposed besides the placid joy of a nap in an endless green field on a sunny summer day.

Filtered through Koh’s perspective, the film manages to pull off a two-tiered feat of cinematic sleight-of-hand, offering a surface explanation of its symbolic substructure that doesn’t always jibe with what we’re actually seeing. In this reckoning, the reckless-but-receptive hero himself represents the motorbike of the title. Miyoko, the object of his affection who becomes increasingly difficult for him to manage as she begins biking herself, is the island itself, a reductive characterization that grants him the full command of the future and all the forward-facing propulsion that comes with it, the lone master of a life spent “looking for the wind.” It relegates her to the past, the alluring denizen of a secluded haven immured in its own long history, dominated by archaic rituals for the returned dead, an island within an island.

As the film culminates, it becomes increasingly clear that this binary classification is all part of a coping strategy around the tragedy that closes out the story, although it’s left equally ambiguous whether this is an actual event or the metaphoric closing point for a relationship which, in either outcome, has ended on Miyoko’s own terms. Two roads stretch out, each equally possible, each representing its own conception of the future. This entrancing ending confirms His Motorbike, Her Island as a movie of reminiscence, filtered through a thick haze of nostalgia, in which the entire contents are filtered through those sensations, the eventual outcome coloring all that comes before. Like the best works of this type, it manages to embody two states simultaneously, recapturing a rapturous rush of feelings while deepening the core of melancholy through the experience of age. Unlike many of them, it also enfolds this duality into its own structure, creating a doubled vision of a vanished past that manifests its own personal gallery of reflections, echoes and ghosts.