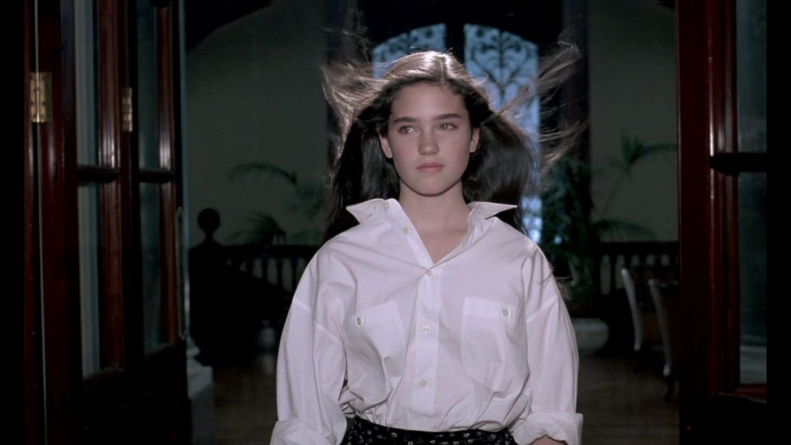 There’s no doubt that Argento wants us to cheer for society’s underdogs, who are far from home and up against impossibly large, patriarchal institutions.

Phenomena, like many Argento films, takes an image-first approach to the art of cinema. It grants a privileged position to images (especially visceral ones), which are also the raison d’être for its existence. A convoluted narrative, which scrambles to suture together the various sights, emerges only later.

But the narrative is even more slapdash here than in the Italian schlockmeister’s other works. It combines two very different movies: a giallo picture about a series of murders at an all-female prep school and a supernatural fright flick about a girl (Jennifer Connelly, barely 14 years old at the time of Phenomena’s release) who has the power to communicate telepathically with insects. The giallo provides the connective thread among a smorgasbord of weapons (such as scissors, chains, scalpels and a strange sort of javelin spear), a severed head that drops down a waterfall, a monkfish-faced boy and a room of elegantly covered mirrors. The fright flick, by contrast, links lots of insect imagery (a bee that crawls along a finger, a green-glowing firefly that swirls its way into foliage, a swarm of flies that presses up against plate glass), as well as several memorable moments of our protagonist in distress: she stands in a crosswalk as cars speed by, swims out from under a fiery explosion, forces herself to vomit poison and sleepwalks off the side of a building.

The two movies find common ground in the ever-squirming maggot, who feasts on the decaying flesh of murder victims and exists as an insect-in-formation with the potential to help Jennifer (character name: Jennifer Corvino) in her quest, whether this involves terrorizing her bully classmates, trying to crack the murder case or struggling for survival against a villainous duo. Because these hungry little worms are a key link and an absolutely disgusting sight, the maggot-image is Phenomena’s most significant. We see them writhing along a velvet glove and a bar of soap, as well as through several orifices of the aforementioned severed head. Surely these are among the most effectively revolting scenes in Argento’s oeuvre. They hearken back to the hairbrush maggot scene from Suspiria and act as a reminder of Argento’s continuing fascination with animals of all types: crystal-plumaged fowl, flies (also on velvet), soon-to-be-headless cats and witch-possessed dogs.

Another important animal in Phenomena is crime-solving chimpanzee Inga (Tanga, in her only screen appearance), nurse and personal assistant to wheelchair-bound entomologist John McGregor (Donald Pleasence). While Professor McGregor and Jennifer converse about the mating habits of insects, Inga busily discovers murder weapons and generally saves the day (she rescues Jennifer twice and introduces her to McGregor in the first place). She’s also the movie’s most tranquil presence, unassuming and easily dismissed – we never think twice about her role as McGregor’s nurse and sometimes forget she’s hanging out in his modern mansion.

Inga and the insects (there’s a band name!) present the possibility for integration of animal and human life, but most of the human characters shrug this off in favor of their own violent neuroses. McGregor is a partial exception to this rule, although his oft-patronizing way of conversing with Inga implies plenty of room for progress. Jennifer, however, does a much better job of it. She demonstrates sensitivity to Inga and flesh flies alike through her relaxed take on things like murder and bugs and her willingness to follow along animal paths (as when a sarcophagus fly leads her to the initial murder scene).

Argento deliberately aligns young women and animals to show them as both vulnerable and undervalued in intelligence and instinct. For the film’s villains, both “species” represent inconveniences to be confined and destroyed. When a bee flies into the backseat of her car, Frau Brückner (Daria Nicolodi, Argento’s soon-to-be ex-wife) sees it merely as a pest and openly desires its death. Jennifer protects the bee from Brückner’s panicked swatting and metamorphoses into a similar kind of pest, at least from the vantage point of Brückner, who eventually tries to poison and drown her. Jennifer’s reaction is fly-like: she pukes (flies regurgitate saliva and stomach acid to make their food digestible) and attempts escape by pressing against locked windows. Eventually, in true animal and final girl fashion, she finds a way out.

There’s no doubt that Argento wants us to cheer for society’s underdogs, who are far from home and up against impossibly large, patriarchal institutions (played up by the fact that the prep school is called the Richard Wagner Academy for Girls). “There’s a killer. A vicious killer. Girl killer,” McGregor tells a couple of detectives, with the idea being that a girl killer is the very worst kind. The connotation of the line positions Argento against these killers, as do the film’s depictions of animals terrorizing evildoers, who form as the result of adult human failure to accept the irrational, to listen to the marginalized and to help without seeking personal gain.

So while images are the starting point for Argento’s cinema, we would be remiss to ignore how Argento uses each work’s plot scraps to pack pictures with meaning and force viewers into an uncomfortable, inquiring position. Why does the maggot-image make us want to gag in horror if those tiny larvae are actually quite talented at helping us solve crimes and if they present no real danger to living people? Why does a girl’s severed head make us scream with glee when young women are so frequently the targets of adult control and violence? The questions powerfully acknowledge the vice grip of our damaged impulses, undoubtedly shared by a sadist like Argento. But Phenomena clarifies that we must bring these impulses into the light of the darkened theater, not to validate but to dissect them.