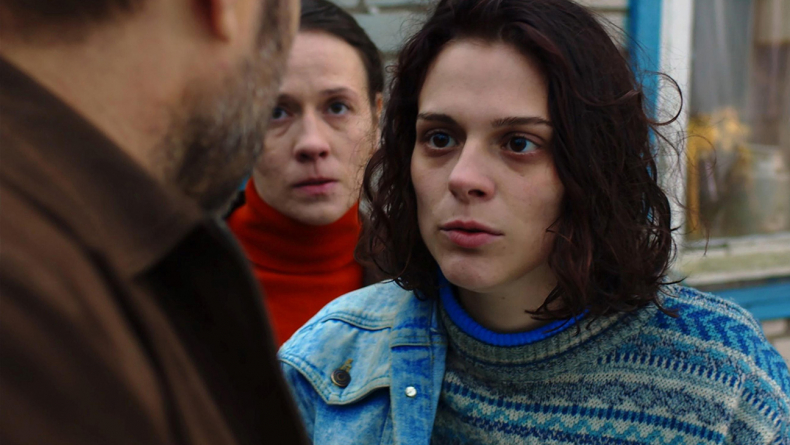 Tesnota depicts its claustrophobic place and time with an authenticity derived from lived experience.

The first 15 minutes of Tesnota, Russian director Kantemir Balagov’s feature debut, suggest that its central theme will be togetherness. Its opening scene gives us twentysomething Ilana Koft (Darya Zhovner) and her father (Atrem Cipin, a dead ringer for French actor and silver fox Olivier Rabourdin) working harmoniously at their auto shop, which the two close up for the night before driving off to an engagement party at their home on the outskirts of Nalchik, the capital of Russia’s Kabardino-Balkarian Republic. The happy (and very young) couple consists of Ilana’s brother, David Koft (Veniamin Kac), and the local rabbi’s daughter, Lea (Anna Levit), whose betrothal unites various members of the tiny local Jewish community—that is, until David and Lea, out for some one-on-one celebration, get kidnapped and held for ransom by Kabardians, a dominant ethnic group in the region.

At this point, the film becomes a study in breakdown for three key domains: tribe, family and couple. The goal-oriented element of this study surrounds the question of money. How will the Koft family—impoverished, relatively new to town—procure the cash necessary to free David and Lea? They have nobody to rely upon but their community members, who, gathered in a cramped room that passes for a synagogue, turn out to be angry, confused and sharply divided on the question of donating money to help. When they manage to raise only half of the proposed ransom, it becomes clear that the majority of the group sides with the rabbi and Lea: the money raised will go towards her freedom, while David remains in captivity. This leaves the Kofts in a desperate position, which their associates exploit.

The father and mother (Olga Dragunova) quietly accept this position and the resulting abuses, but Ilana boldly refuses it. This is where the character-driven element of Tesnota’ study in breakdown comes into play, and it’s undoubtedly more gripping than the kidnapping scenario that plays out simultaneously and intersects with Ilana’s story at a few key junctures. Artem Emelianov’s handheld cinematography tracks Ilana’s spontaneous acts of reckless courage in close proximity to her face and body, a strategy that elicits a memorable performance from Zhovner, wide-eyed, physical and forthright to the point of violence. Ilana butts heads with everyone in her vicinity, but her conservative mother—who insists that Ilana shed her bulky but stylishly light-blue denim mechanic clothes in favor of dresses and who plans to marry her off to a local boy for David’s ransom money—provides a major source of conflict. As their insults towards one another heighten in intensity, we can’t help but wonder when the widening rift between them will become irreparable.

Part of their issue is generational. The film takes place in 1998, a year whose frequency it channels through its CRT television sets, gas-guzzling vehicles, techno-colored raves and VHS-recorded music videos from the likes of Tatiana Bulanova and Timur Mutsurayev. Tesnota depicts a post-Soviet moment, with all the novelty and semblances of freedom that that entails. Ilana and her half-secret Kabardian boyfriend, Zalim (Nazir Zhukov), are the representatives of this new era, which bumps up against the “do only what is necessary to survive” mentality of their elders. Balagov depicts the older characters as more in tune with the complications of hard reality, which appears not only in David and Lea’s abduction but also in references to the impending Second Chechen War. Kidnappings were common in Russia’s North Caucasus region at this time, in part because of longstanding conflicts between various ethnic groups (called “tribes” by the movie’s characters), in part because of an economic depression leaving many of the area’s inhabitants desperate for money.

Yet Ilana’s dangerously transgressive position comes across as vital in a world whose history gathers in on itself and threatens to rupture the chilly, bohemian, Y2K-chic environs. Indeed, the rupture arrives in a wildly controversial scene at the film’s halfway point, where actual snuff footage of Chechen radicals torturing Russian soldiers plays out on the reflective, static-lined surface of a television screen. Terms like “graphic” or “obscene” are incommensurate with the sounds and images that appear in the footage, like a closeup of a knife entering a human neck or the screams of a young person for his mother and for life as he is torn apart, but Ilana doesn’t look away. The moment is crucial for showing the centrality of real violence to Ilana’s vehement existence: she is not irresponsible or even nihilistic but bitterly radical in her own right, even while locked inside the patriarchal refusals and embraces of her place and time.

Tesnota depicts its claustrophobic place and time with an authenticity derived from lived experience. Text appears on screen during an opening sequence to assert the director’s connection to the movie’s narrative: “My name is Kantemir Balagov. I am a Kabardian. I was born in the town of Nalchik in the North Caucasus region of Russia. This story happened in 1998.” The statement helps differentiate its machinations from the Urban Outfitters style of ‘90s nostalgia ubiquitous in pop culture right now and reminds us that the era was as rife with slaughter and misogyny as our own. Actual togetherness was as impossible then as it is now. Tesnota—invasive, limited, possessive, full of uncomfortable truths—remains the only viable alternative to total isolation.