The sound of pure confidence, of a band operating at the peak of their abilities and finding ways to progress while holding onto what made people like them in the first place.

Version 2.0 is the sound of pure confidence, of a band operating at the peak of their abilities and finding ways to progress while holding onto what made people like them in the first place. Garbage was riding high off the success of their self-titled debut and they brought that energy into the studio to further the electronic-tinged blueprint of tunes like “As Heaven Is Wide.”

But this album is more than just locking down one sound. Many of these tracks move in unexpected directions. The songs are never content to simply hit a melody and stay there. Instead, the band opens a bag of tricks and throws in whatever they like. It’s the type of inspiration that you hope success brings, one where the rules are thrown away in favor of creativity.

You can hear the evolution of Garbage immediately on this album. Whereas “Supervixen” opens Garbage with a distorted blast of guitars, “Temptation Waits” starts Version 2.0 with a trip-hop beat and echoing chords. The song ebbs and flows, peaking with a blistering wah riff from Duke Erikson.

This digital DNA is painted all over the record, naturally sliding into the band’s intense performances. “When I Grow Up,” one of Garbage’s best songs, slips in record scratches, slippery guitars and one hell of an earworm vocal to create a whole that is endlessly listenable. “Hammering in My Head” races forward with a Prodigy-style rave beat and a buzzsaw riff. The song keeps adding and subtracting layers, like warping Shirley Manson’s vocals, fading to needle guitars, then roaring back. “Sleep Together” subsumes shimmering synth lines into an industrial clang. “You Look So Fine” sounds like a lost Depeche Mode song with its icy piano, cinematic strings and synth-pop sheen. Manson sings beautifully about the death of a relationship, her vocals layered over each other as the track ends.

It’s not all electronic beats though that make these songs work. “I Think I’m Paranoid” fuses New Wave guitar notes with a roaring grunge chorus, as Manson’s vocal delivery ranges from detached to alluring to raging. “Wicked Ways” is almost bluesy in its delivery, with slide guitar and speaking-shaking drums. “Medication” and “The Trick Is to Keep Breathing” show a invigorated ability to assemble powerful ballads that retain their grit and earthiness, even when the music starts to float into space. “Special” blooms with a propulsive groove and guitar lines that can be pointed to as Exhibit A for why Garbage was given the next Bond theme to write.

“Push It” best combines these two sides of the record, melding electronic and organic elements the most out of any song here. It’s one of those tracks where you can find catchy melodies or rhythms in every instrument, but they all combine into something off-kilter. It’s almost like looking at an image underwater, where the light is bent to make everything feel a little bit askew. Vocal harmonies push against grimy guitars, the build-up leads into a whispered chorus, the bridge drops into a sudden rush of strings, only for the band to come bursting back forward. It’s a masterfully constructed song filled with wonderful, unexpected moments.

While subsequent albums by Garbage would fall victim to trend-chasing and in-fighting, when the band returned after their hiatus, it was that melding of electronica and rock that they kept as their core, resulting in the underrated Not Your Kind of People. Version 2.0 defines the ideal sound of the band, one where boldness holds the digital and organic together to fuse into something new. 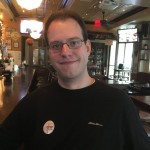