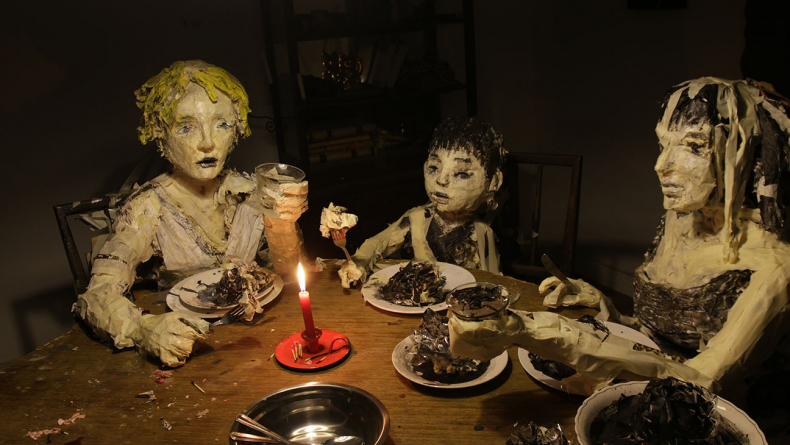 “Little Red Riding Hood” gets an odd, inexplicable but undeniably haunting upheaval in La Casa Lobo (The Wolf House), an animated curio hailing from cowriters/directors Joaquín Cociña and Cristóbal León. In it, the popular French tale—of a girl lured into the trap of a wolf posing as her grandmother before eating them both—receives another kind of expansion on the general premise. Those who have read more than one translation will remember the multiple endings involving a woodcutter (or, in other versions of the story, a hunter) who saves the girl and her grandmother in some way, whether by intervening before the wolf attacks or by cutting its stomach open to free them. In this new telling, though, the trajectory of the story turns inward.

The screenplay (by Cociña, León, and Alejandra Moffat) makes a lot of other alterations, too, but this is the most important. Instead of confining itself within the context of a fairy tale, the internalized nature of what occurs transforms the fairy-tale aspect into something of a psychological drama. Here, the “wolf” is represented literally as the house in which the grandmother once lived, but the filmmakers are not concerned with any literal interpretation. The house is a state of being, brought on by the political and sociological implications of the girl’s identity within a specific place and time. The opening scene provides the proper set-up: This is an origin story, of a sort, about the production of a certain brand of honey amid the idyllic mountains of Chile.

Again, it would not be wise to consider this entirely from a literal perspective. This factoid about the honey is mentioned in the opening line, which is faux narration in a documentary about and produced by a closed community living between these mountains. The girl, María, escaped from Colonia Dignidad, a sectarian religious cult of German origin with such a firm grasp on its members that, when the chief metaphor reveals itself, it isn’t hard to imagine the “wolf” being any number of things to do with the cult. It could be the leader. It could be the members. It could be something far less tangible, such as the mindset that inspires the formation of its membership and the forcefulness with which they are kept in line.

La Casa Lobo is unlike anything one has likely seen, even within the form of animation. We are accustomed to seeing constructed worlds, of course—expansive, colorful worlds with rich, detailed characters. What the animators have given us here is a film constantly inventing, then reinventing, its own rules before throwing them out entirely. The presentation is that of a moving diorama, crossed with a type of two-dimensional animation that defies categorization. The settings materialize in front of us, then morph into the next setting. When characters move, their body parts twist weirdly or even dematerialize and come back together to signify a new motion. The walls come alive with faces, both grotesque and familiar, that speak to María.

There are actors credited with the voice work here: Amalia Kassai, whose agonized whispering is both to and from María, and Rainer Krausse, who offers the high, cold voice of the wolf. Their main job is to aid in establishing the atmosphere of this telling of the fairy tale, which takes seriously the grotesque nature of its original form. María, having been captured and locked away in a house for a hundred days, slowly begins to lose any sense of time, place, sanity or agency. In that way, the film also holds an enormously emotional gut-punch by the end. With it, María has either been presented with a choice or has given in to the torment. Through its combination of formal experimentalism, sociopolitical underpinnings and careful manipulation, La Casa Lobo proves hard to shake.