The cinematic worlds that Wes Anderson has created from his 1998 breakthrough film Rushmore through to this recently released work have been so finely detailed that you had to fight the urge to attempt to push through the screen and inhabit them yourself. But what kept you in your seat was the knowledge that, if by some kind of magic you were able to enter their world, there was emotional anguish waiting for you alongside the overstuffed bookshelves and vintage clothing.

For his fans, that is why they keep returning to Anderson’s work, that Fellini-esque combination of real world concerns wrapped up in settings that look pulled from picture books. At the same time, that’s likely what has kept him from having a huge runaway success here in the U.S. That disconnect between the story and the world surrounding it can be difficult for the average moviegoer to absorb.

The meat of the story takes place in the lavishly appointed luxury hotel nestled in the Alps, where the richest residents of the world are looked after—with the richest and most aged female visitors receiving the most (ahem) attention—by concierge M. Gustave. Like Anderson, Gustave (played with impeccable élan by Ralph Fiennes) insists that everything from the placement of a hat on the elevator operator’s head to the nail polish worn by one of his elderly lovers is just so. 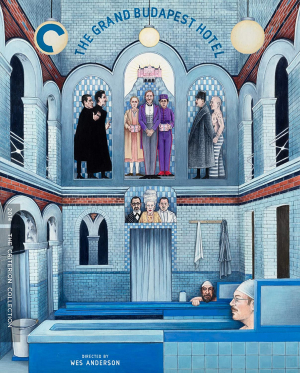 Gustave’s carefully crafted world is thrown into disarray after Madame Desgoffe-und-Taxis (Tilda Swinton, under a mile of prosthetics), an 87-year-old grande dame who he consorted with, is poisoned. While paying his respects, he learns that he is to inherit a priceless painting from the deceased, a point that enrages her children, particularly her son Dmitri (Adrien Brody). And when Gustave steals the painting, it only seeks to do him more harm as he is quickly imprisoned for the theft and then fingered for the murder of his deceased paramour. What follows is an outlandish and delightful escapade that includes an elaborate prison break, a clandestine meeting in a mountaintop monastery and a ski slope chase scene that runs at breakneck speed.

The whole thing is a delight to watch, but as ever, what keeps The Grand Budapest Hotel slightly grounded is an on-screen relationship. In this case, it is the friendship that builds between Gustave and his lobby boy turned trusted valet Zero (newcomer Tony Revolori). Although they remain apart in terms of age and stature, the two have an amazing rapport and aid one another to survive the slings and arrows being hurled their way. They play off each other with the same verve and heart that Bill Murray and Jason Schwartzman exhibited in Rushmore.

Too, there’s film has a wistful air to it, built up through its narrative structure. It opens on a young woman visiting the grave of a beloved author with a copy of his book The Grand Budapest Hotel in hand. The story flashes back 20 years to the office of that same author, who begins to tell of his residency at the titular hotel and meeting its owner, the grown-up Zero (F. Murray Abraham). The bulk of the movie is then told as another flashback. It sounds more complicated than it is presented on-screen but frames the proceedings in a smartly nostalgic fashion. And it serves as a reminder of why great novels and films keep us connected to those bygone eras.

If there’s any complaint to be made about Anderson’s latest creation is that it perhaps moves at too breakneck a speed. For all the thoughtfulness that is put into the design of the sets, there’s little time to really drink them in. It’s only when the film slows down for the briefest of scenes that the little details pop out.

Then again, that’s what makes Anderson’s movies so infinitely re-watchable. Catch it the first time for the plot, and then return to marvel at what’s going on in the background or his signature camera movements. It may not be the recipe for instant success but it surely will provide a foundation for the director’s longevity in the minds and hearts of current and future film lovers.

Greil Marcus is revered as a deity. …