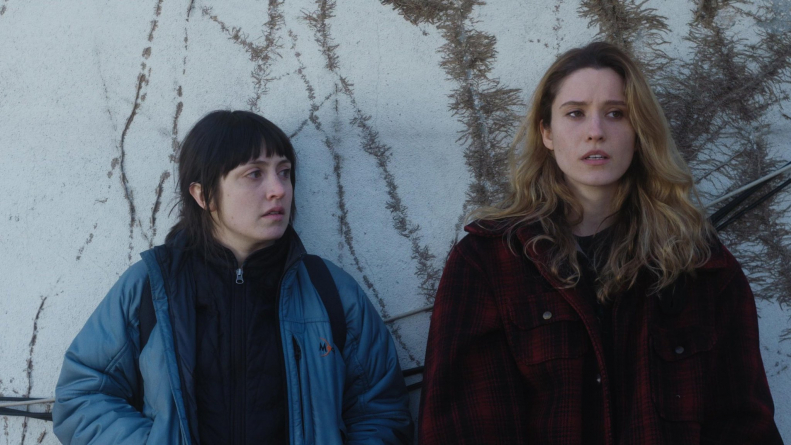 As powerful and obliterating as it is delicate, just like any real friendship.

In Dan Sallitt’s new film Fourteen, a friendship between two young women unfolds over the course of decades in casual flits and near-imperceptible time jumps, but the cumulative effect of their drifting intimacy packs a profound punch.

Mara (Tallie Medel) and Jo (Norma Kuhling) have been friends for ages, but when we meet them we don’t know that. Sallitt plays things close to the vest, letting every scene unfold with artfully unadorned aplomb. There’s no over-the-top plotting, no excessive cutting. In most sequences, the camera is somewhere in the corner of a room, positioned with passive blocking, to let long takes unfold at a natural pace. Scenes bleed into other scenes and it’s only context clues, slight hair alterations and offhand remarks that telegraph how much time has passed between them. Sometimes days, others months.

But that languid arc length allows for the rich complexity of Mara and Jo’s relationship to make itself known to us in bits and shards. Visually, they’re as obvious a study in opposites as you’re likely to find in any mainstream comedy with a similar premise. Mara is short, dark haired, practical and would 100% be the sidekick in love with the protagonist who doesn’t notice her until the film’s final moments when she takes her glasses off for the first time. But Jo is tall, blonde, and severe. She should be the star of the show.

Films and TV shows about lopsided friendships tend to make the “difficult” friend a showcase of extremes. In a lesser film Jo might be artificially charming, so she would feel too likable to want to judge, or conversely, her foibles would be dialed to 11, so her thornier personality traits could be the centerpiece of broad spectacle. But here, Jo is like a ghost. She pops in and out of Mara’s life with consistent inconsistency, pulling in everything around her like a human black hole.

We get to know Mara not as her own person, but in her endless role as Jo’s friend. So much of what we know about either woman comes from subtle elements of each actresses’ performance that Sallitt’s visual approach turns into a loud semaphore. When the camera isn’t doing constant shot-reverse shot and the frame stays uncluttered, it allows us to see the minor jealousy in Jo’s voice when Mara says she can’t hang out because she has a date, or to feel the body language shift when Mara’s on her phone texting instead of giving every ounce of her attention to Jo.

Mara’s opinions of her exponentially draining relationship with Jo come from the reactions of new love interests over the years when they meet her for the first time. Every new friend or lover Mara brings around Jo remarks in some way about how she doesn’t seem so bad, suggesting much of the banter Mara makes about her best friend in outside company must be negative. But it’s understandable given how much Mara gives and how much Jo takes.

By the midway point in the film’s tight running time, a decade has passed, and Jo’s repeated bombarding into Mara’s life comes to what feels like a climactic head, with the two friends having it out as viscerally as they can in such a quiet, understated film. But the film’s most devastating play lies in its painful third act. It doesn’t come from Jo continuing to intrude and repeat the same past mistakes, but rather in how easily the passage of time allows her to fade from Mara’s life.

Sallitt chooses to, in a particular tender and throwaway moment, reveal the heartbreaking origins of this long-standing friendship moments before ending it forever. In such a scant amount of screentime, the film captures the raw energy of friendship and how fleeting our connections with loved ones can be with age. Fourteen is a touching portrait of the ravages of mental illness, both on those who suffer from it and those who stick by them in their troubles, until they no longer can. It is as powerful and obliterating as it is delicate, just like any real friendship.