Why is an artist considered a sell-out once they receive the backing of a major studio? R.E.M. fans made these sorts of claims when the band hopped from I.R.S. Records to Warner Bros. while fans of David Gordon Green’s ponderous indie films cried bloody murder when the director made a mint directing stoner comedies. Is there cred in starving? Or perhaps fans are fearful that when money gets involved, a bright talent may give up their vision and sell their soul?

While that may be true in the case of Green, John Waters welcomed the opportunity when he made Polyester for New Line Cinema in 1981. “I’ve been trying to sell out for years,” he claimed. “It’s just that no one would buy me before.” It makes sense. Waters cut his teeth making gross-out midnight movies during the ‘70s, films that did not shy away from the raunchy, vulgar and scatological. By the time New Line invested in Polyester, Waters had already made a name for himself with Pink Flamingos (1972) and Female Trouble (1974), both starring the inimitable Divine. Maybe an artist gets tired of making the same sort of thing over and over again.

Bankrolled at $300,000, Polyester still feels like vintage Waters. Maybe there is a bit of a sheen there that isn’t present in his earlier films, but if fans worried that he would lose his edge, Polyester proved otherwise. A commentary on middle-class America, Polyester evokes the feel of Douglas Sirk’s ‘50s films. Imagine All That Heaven Allows with a drag queen and you start to get the picture. Todd Haynes also subverted the genre with Far from Heaven (2002), introducing forbidden homosexual and biracial love in an homage to ‘50s melodrama, but Waters loudly and boldly went there first. 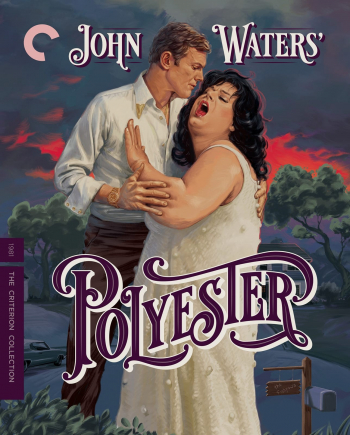 Divine stars as Francine Fishpaw, a put-upon housewife who lives in a big house in suburban Baltimore. In earlier Waters films, Divine usually plays the hell-on-wheels provocateur, but by asking the actor to play the victim, the director may have eked out a career performance. When we meet Francine, she is participating in the morning ritual of a demure housewife: struggling into tight clothes, making up her face, trimming her nostril hairs. Could this be domestic bliss?

Nope. Francine is greeted by a cadre of picketers outside her residence. Her husband, Elmer (David Samson), runs a porno theater. Rather than be cowed by the protesters outside, Elmer turns the demonstration into a photo op for his theater. Francine is appalled, already aware of her low-standing in the community. Her children don’t make life any easier. Her daughter, Lu-Lu (Mary Garlington), is loud and rude, dating a punk (Stiv Bators). Meanwhile, her son Dexter (Ken King) is a glue-sniffing foot fetishist wanted by the cops for stomping on women’s toes. Francine has nowhere to turn. Even her mother, La Rue (Joni Ruth White), insults Francine for her weight while stealing money from her purse. The plight of the housewife is hard enough without all these horrible people around.

John Waters’ films are both invigorating and exhausting. Over the course of 86 minutes, Francine suffers one indignity after another. The only bright light is her friend, Cuddles (Waters regular Edith Massey), her former housekeeper who becomes suddenly rich thanks to an inheritance. The toothless, aged Cuddles fancies herself a debutante now and keeps a manservant about to drive her places and do her bidding. Yet, Cuddles is still affectionate with Francine and even helps her sniff out the truth about Elmer’s affair with his skanky secretary (Mink Stole). “At first, I thought he was walking the dog,” Cuddles tells Francine as she stakes out Elmer at a motel, “but then I realized it was his date!”

Waters thought of cinema as an immersive art. Never one to shy away from the gross, audiences who saw Polyester in the theater were furnished with a scratch-and-sniff card that corresponded to certain scenes in the movie. Francine is gifted with a strong sense of smell and as she sniffs roses, Elmer’s farts, a skunk and even a pizza, the audience is invited to smell along with her. The Criterion Collection DVD comes with a replica of this card, allowing us to experience the awful olfactory sensations early ‘80s moviegoers experienced. Yes, it is schlock, a throwback to failed cinema experiments of the past such as Smell-O-Vision and the electric shocks that pricked audiences during The Tingler (1959), but it was a ballsy move by Waters.

In addition to his usual players, Waters also conscripted fading matinee idol Tab Hunter to play Todd Tomorrow, the owner of a drive-in that shows art house films and serves caviar and oysters. When Elmer gleefully leaves Francine for his secretary, she takes up with the hunky Tab, only to discover that he and her mother have been conspiring all along to steal all of her money.

Somehow, everything more or less turns out okay for Francine in a happy ending finale only John Waters could devise. But take a deeper look. Somehow, he managed to make a film for a major studio about a tortured housewife a la Elizabeth Taylor, played by a drag queen. Polyester opened the door for Waters to make what is perhaps his most-widely beloved film in Hairspray (1988). A gentler Waters may have been developing, but Polyester stands firmly as a gateway between the gross-out films of the past and the soft-hearted sentimentalist ones that were to come.