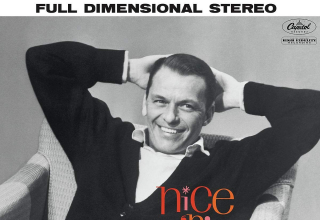 Most people generally don’t think of Frank Sinatra as an album-oriented artist. That may be a strange thing to say about a man who made 59 studio albums in his lifetime and sold over 150 million of them, but when you think of Sinatra, you think of signature songs like “Love and Marriage,” “I’ve Got You Under My Skin” and “My Way” rather than their accompanying albums. Of course, singles were the rule at the start of Sinatra’s career in the late ‘30s, with albums, for the most part, not becoming cohesive artistic statements until decades later. But, years before progressive rock bands turned rock operas into a tiresome cliché, Sinatra, through a string of essential releases on Capitol Records, helped give shape to the idea of the concept album—the album as an album, its parts held together by a unifying theme or mood. Two of his finest, 1955’s In the Wee Small Hours and 1958’s Frank Sinatra Sings for Only the Lonely, were introspective works that dealt with lost love, colored by the dissolution of his marriage to Ava Gardner; a third, the 1965 Reprise release September of My Years, was an autumnal, album-length reflection on growing older. Likewise, Sinatra’s Nice ‘n’ Easy, recorded and released on Capitol in 1960, found Ol’ Blue Eyes firmly in balladeer form. It’s more of a mood piece than a proper concept album—there’s no overarching story linking the songs—but it remains one of his breeziest and most understated records.

Nice ‘n’ Easy kicks off with the title track, by some distance the most upbeat tune here. It’s the one you’re most likely to find on any of Sinatra’s many, many greatest hits collections, but its punchiness (as well as its subtle sauciness) makes it a clear outlier—notably, it’s the only song on the album to feature a full drum kit. (For reasons uncertain, it was a last-minute replacement for “The Nearness of You,” included here as one of three bonus tracks on CD and digital.) From “That Old Feeling” onward, Nice ‘n’ Easy takes a much mellower turn, and Sinatra sings these songs like he’s serenading you, personally, rather than a showroom full of people.

That makes sense given the overall tone. Even though Sinatra had no authorial role in writing the songs he sang, he played a curatorial role in selecting them. “First I pick the mood for an album […] or perhaps it might be that I had the title and then picked the mood to fit it,” Sinatra once said of his creative process. From there, he would whittle down dozens of prospective songs into a final track listing, taking into account the pacing and thematic cohesion from one track to the next. Nice ‘n’ Easy, like all of Sinatra’s best albums, seems to flow effortlessly: Irving Berlin’s somber “How Deep Is the Ocean?” transitions smoothly into George and Ira Gershwin’s sprightly “I’ve Got a Crush on You,” just as “Try a Little Tenderness”—transformed into a soul standard by Otis Redding six years later—sits comfortably alongside another Gershwin brothers classic, “Embraceable You.” As opposed to the nocturnal heartbreak of In the Wee Small Hours, Nice ‘n’ Easy sounds lighter and more inviting, and feels hopeful that love lost may be found anew.

Though Nice ‘n’ Easy’s cover bears Sinatra’s name, credit for its warm sound should be shared with arranger Nelson Riddle, with whom Sinatra recorded some of his most enduring works (In the Wee Small Hours, Songs for Swingin’ Lovers!, Only the Lonely); their first collaboration, “I’ve Got the World on a String,” revitalized Sinatra’s career and established Riddle as one of the most noteworthy arrangers of the time. Riddle once spoke of how the passage of time had “separated [Sinatra’s] voice into different colors,” and Riddle himself knew not just how to work with those colors, but how he could alter their hues. The saxophone on “That Old Feeling” complements Sinatra’s voice like a duet partner, as does the trumpet on “She’s Funny That Way.” Meanwhile, Riddle’s arrangements on “I’ve Got a Crush on You” and “Fools Rush In” convey the nervous excitement that comes with falling in love.

Enjoyable as it is, Nice ‘n’ Easy can sound too nice, too easy on the ears. It would be unfair to go as far as calling it low-stakes or even one-note, but the album does lack the musical energy and dramatic stakes of landmarks like In the Wee Small Hours and Songs for Swingin’ Lovers!. It’s hard to imagine this being anyone’s introduction to Sinatra’s music, but novices may find that some of the less distinct songs on the album tend to blur together; it’s the sound of Ol’ Blue Eyes coasting, and that seems to be why only a few of his takes on these songs are widely known. Still, it’s a feat for an album to remain as listenable, let alone worth the hoopla of another reissue, as Nice ‘n’ Easy does 60 years later. For these reasons, it’s an unusual thing: a great Frank Sinatra album that hasn’t been written about deathlessly, and is ripe for rediscovery.

Coldplay would never again record an album quite as humble and charming as Parachutes. …