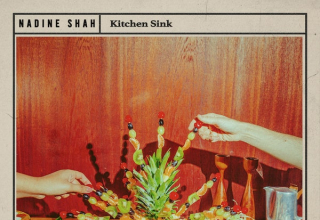 Nadine Shah’s new album Kitchen Sink created a bit of a problem for the English singer-songwriter. Thanks to the glories of the global pandemic, instead of receiving 200 copies of her new album to autograph, she was shipped 20,000. Since then she has been wading through the boxes; “I might as well sign them all since I’ve nothing better to do.” She may not have anything better to do right now, but that seems destined to change.

Like a feral cat, Nadine Shah aurally bursts on to the scene, synths and bass laying out the basics of “Club Cougar.” Saxes add to the rhythmic mix of an older woman with, “No tattoo stock/ No signs of torture,” hunting for younger men. However, what we do have all the way through this disc are tales of women dealing with lives diverging from the norm. “For the album I spoke to so many women,” Shah writes. ”Women who want to have children and can’t physically, women who can physically but choose not to, all different scenarios.”

Based on a painting her brother created of a man embracing a goat, “Ladies For Babies (Goats For Love)” exposes us to new ways of looking at our world and farmyard animals. Initially the song has a bit of an eastern feel as we imagine the clock ticking out the biological realities of the time stamp on one’s womb beginning to head towards the expiration date. Shah’s dual Pakistani-Norwegian heritage opens her up to a world of sonic frequencies to explore along with contrasting cultural imperatives.

The scraping guitars adorning “Trad” feel vaguely Middle Eastern while the song elicits images of woman unwilling to admit the passing of time. Shah’s singing brings into focus the question woman of a certain age are forced to face, “Shave my legs/ Freeze my eggs/ Will you want me when I am old?” The song’s pacing only adds to the overall fear of the indelible march of time.

Initially just piano and drums, “Kitchen Sink” eventually explodes with six-string venom, gated guitar with the sustain cut to near zero. The bile is explosively directed toward the neighbors, unable to see the person you are, but only too ready to leave you gashed and bleeding. “I wasted time with paranoia/ Don’t let an ugly thought destroy ya/ They’ll pick a fight just for the sake of it/ But let it lay and they’ll grow tired of it.” Given enough time people tend to move on if they can’t get a rise out of you.

Shah lays out a world of women trapped by a male world that doesn’t seem to care and a female world equally as ready to find they are unable measure up against each other. By laying out these images she hopes to find another way to navigate those paths. Nadine Shah will not sit idly by on the sidelines watching the world have its way with women and culture. She realizes that we are called upon to make a stand for women, for what is right. If Kitchen Sink is able to speed up the wheels of justice even a little it would be a mission accomplished.

Transforming 30 years of music into a manifesto for today. …