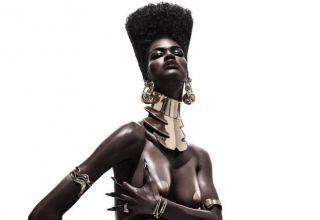 Gaze into Teyana Taylor’s imperial eyes on the cover of her third album as you listen to the opening track, a snippet of 911 audio from the birth of her baby—at home, into the arms of her husband, NBA star Iman Shumpert. The audio was leaked in 2015 and officially shared by Taylor on Instagram in 2018, and by putting it at the front of her album, where she can make a small profit from it, she’s reclaimed it. It’s a moment of vulnerability she wields like a cudgel, and it’s a microcosm of her approach on this fearsome 77-minute album, the first made with her creative control after a few false starts.

Taylor’s been kicking around for a while without ever having a real breakthrough. She choreographed a Beyoncé video at 15; released a terrible Ester Dean-penned single called “Google Me” on Pharrell’s Star Trak imprint; appeared on several reality shows; put out a lovely debut called VII on Kanye’s GOOD label in 2014; flexed her flinty body in Kanye West’s “Fade” video; has otherwise had her entire adult life publicized even before the Kanye-produced K.T.S.E. introduced her to much of the world in 2018. That was the least-discussed product of the Wyoming Sessions but one of the best, though Taylor says she had little say in the final product. A director’s cut of that album could be monumental, but it’s no use waiting around for one, so here’s The Album, aptly named, sprawling and regal.

Pay close attention to her choice of collaborators. Her daughter appears on “Come Back to Me” through Auto-Tune, the unvarnished innocence of a child’s voice as wrenching here as on the Langley Schools Music Project’s “Desperado.” Her husband proves himself a solid rapper on “Wake Up Love,” and the male rappers that appear throughout seem to be playing Shumpert, just as Drake played Jay-Z on Beyoncé’s “Mine;” Quavo’s verse on “Let’s Build” is psychedelic in how his blocky Auto-Tune seems to approximate the act of building a house. Even a kid-brother verse from Diddy’s son King Combs fits in with the family-first approach of Taylor’s career, which at times feels like a lesson in maintaining your integrity while your personal life is privy to the whole world.

Then she rallies all the great freaks who made R&B the most creatively fertile arm of the charts for much of the 1990s and 2000s: Erykah Badu on “Lowkey,” Ms. Lauryn Hill on “We Got Love,” Missy Elliott on “Boomin.” Though Badu’s honey-sweet voice is always a welcome presence, Hill and Elliott are barely audible, the latter apparently showing up to whisper “this is a Missy Elliott exclusive” and grant Taylor the rights to the “Beep Me 911” beat. Taylor seems to be using them for name recognition more than for their musical bona fides, as if to anoint herself heir to their tradition.

Taylor has spoken about how the Kanye-imposed, 23-minute constraints of K.T.S.E. prevented it from encapsulating the whole of who she is. But The Album doesn’t benefit from its 77-minute runtime, especially when much of the midsection is devoted to sleepy songs about sex. The stretch from “Morning” through “Bad,” the second of two consecutive dancehall experiments, could’ve been shorn—as could have some of the late-album tracks surrounding the stunning “Still,” on which she bursts into sobs that feel as voyeuristic to listen to as her orgasm-moans on K.T.S.E.’s “Hurry.” Compounding the problem is how lush and beat-averse this music is, heavy on instrumental flights of fancy, sparse on groove.

The Album is a little like George Harrison’s All Things Must Pass, another record made by an artist so intoxicated by hard-earned freedom they decided to do pretty much everything they always wanted to do in one place. It feels beside the point to argue that the album’s too long, so inspiring was it to see the liberation of such a great mind. But the next album he made was 44 minutes long. Taylor should take note.