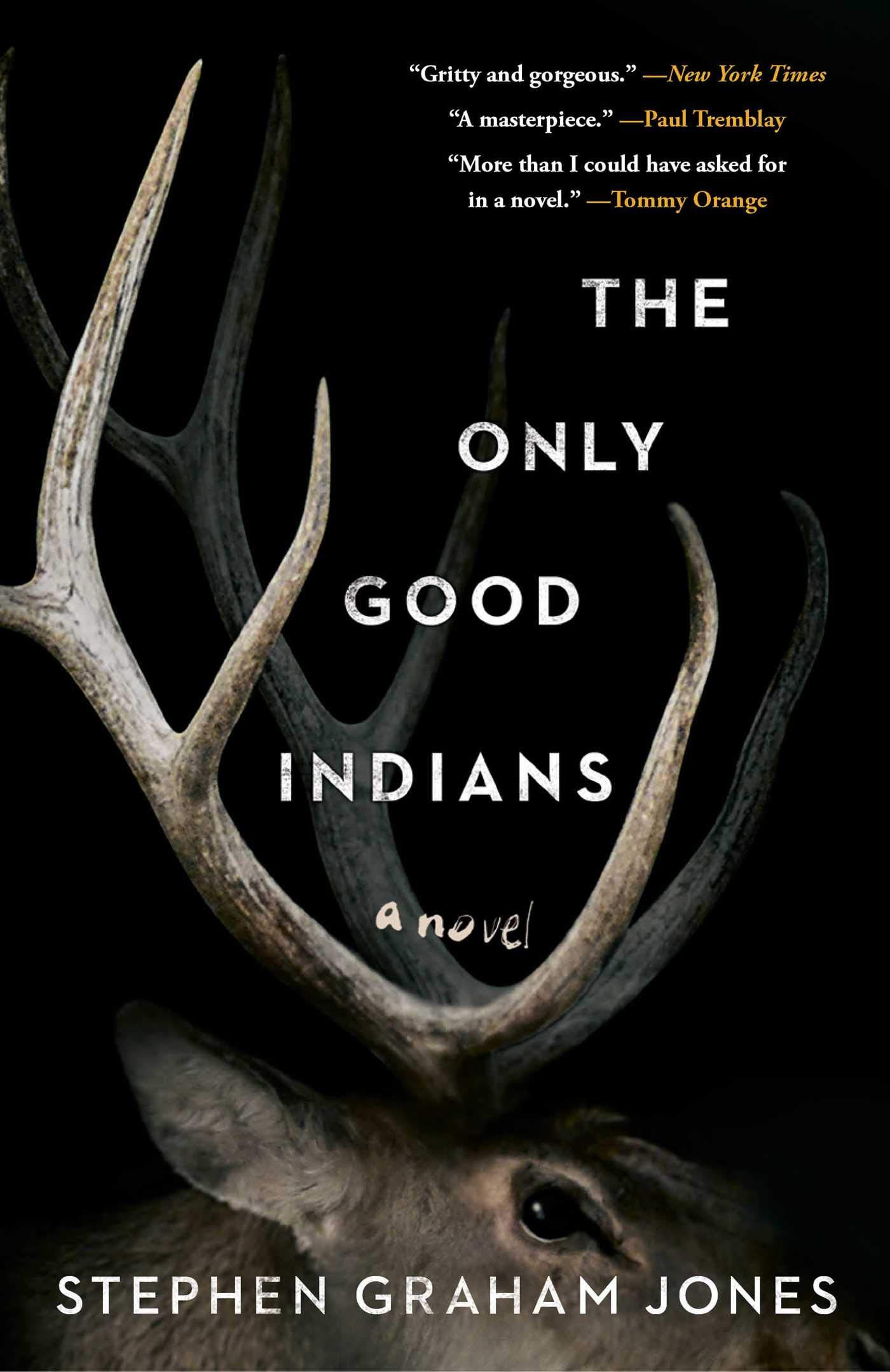 There’s a scene in ’Salem’s Lot where two of the main characters are trying to escape the vampire den that is so immersive and visceral it defines horror in essence as a literary genre. Long after the mechanics of that novel have left you the intensity of the fear that scene created will remain, but it is the sort of gem rarely duplicated, even by the man who wrote it. As a fan of the form, this sort of scene is the dragon you chase, the reward for staying up late and reading that extra chapter despite any internal promises to your rational mind. With the use of a dead dog, a passing train and an elk head woman, prolific and appropriately lauded writer Stephen Graham Jones creates such a scene in The Only Good Indians, his new novel about a bad choice returning to extract revenge on the four men who made it.

Ricky Boss Ribs, Lewis Clarke, Gabriel Cross Guns and Cassidy Sees Elk were twenty-six-year-old Blackfeet men living on the reservation in Montana when they decided to hunt on land reserved for the tribal elders. In the deep November snow, they came upon a herd of elk and opened fire, killing nine animals including a pregnant female that proved the hardest to take down. The death of the young cow and her calf on sacred land released a vengeful spirit that manifests as a woman with the head of an elk, and she returns ten years later to kill her hunters and everyone they hold dear.

The fates of the four men seemed intertwined since childhood where they were fuck-ups together, a designation confirmed when the game warden busted them for the elk slaughter. With their hunting privileges revoked, alcoholism and early graves appeared to be their destinies, but Ricky and Lewis made it off the reservation due to different motivations. Ricky took off after his cousin overdosed, had plans for Minneapolis, made his way onto a construction crew but was the first to encounter the Elk Head Woman. Lewis left with a white woman (Peta), married, and got a job at the post office. The events with the elk herd affected him more than the others, driving him toward a sense of stability beyond the chaos of his friends and the limitations of the reservation. Gabriel is still on the reservation, poaching, drinking and asserting himself onto the rising star of his daughter, Denorah, a high school basketball prodigy. Gabriel remains on the reservation as well and seems to have finally turned a corner due to a relationship with a Crow woman named Jo.

It’s hard to choose a specific monster haunting the lives of these men. The Elk Head Woman is the obvious candidate, but their decision to hunt out of bounds is endemic of a broader scarcity they are forced to subsist in. Addiction is another monster that plagues the tribe. Poverty and hundreds of years of broken promises from the US government are also fiends that steer the courses of their lives. Before the supernatural touches them there is a sense of resignation among each character that the stories of Indian men in America are already written in doom and it’s only a matter of time until it finds you. But the sense of tragedy is kept on reserve. Jones empowers his characters with an affinity for gallows humor that affords opportunities for social commentary as well as relief from the tension. Working in a close third-person narration with second-person seasoning when the Elk Head Woman wants a word, he proves a master of propulsion, his sentences short bursts of power that drive you from page to page. He is a writer who lives up to his acclaim, layering so much history and critique onto a monster movie framework.

The violence is sudden and shocking in terms of the range of victim and manner of their deaths. One of the great beauties of Jones’ craft is his ability to fully realize his characters no matter how briefly they appear on stage. He derives our empathy for his four main leads but especially makes us feel for the collateral deaths caused by their terrible mistake. After hundreds of hours devouring horror stories on the page and screen, you will believe you can safely label the victims and survivors and invest your emotions accordingly, but Jones is fearless about defying expectations. It doesn’t take long to accept that reality and the ride becomes wilder, chilling and sleep depriving once you do.

Reading this book while Native Americans were being removed from their land for protesting Trump’s folly at Mount Rushmore served as a strange juxtaposition. Seeing the statistics of COVID-19 cases among tribes provides a morbid confirmation of the themes of deprivation Jones examines here. This is a story that unleashes a monster because of a choice. The project to treat indigenous Americans as subhuman is at the heart of a long series of choices that continue to this day. The Only Good Indians confronts that in its title, and Jones has filled his book with so much humanity that you hope it’s the kind of art that alters perceptions. It takes all kinds of narratives to change the world. Given the times, it makes perfect sense that one should be a horror story.