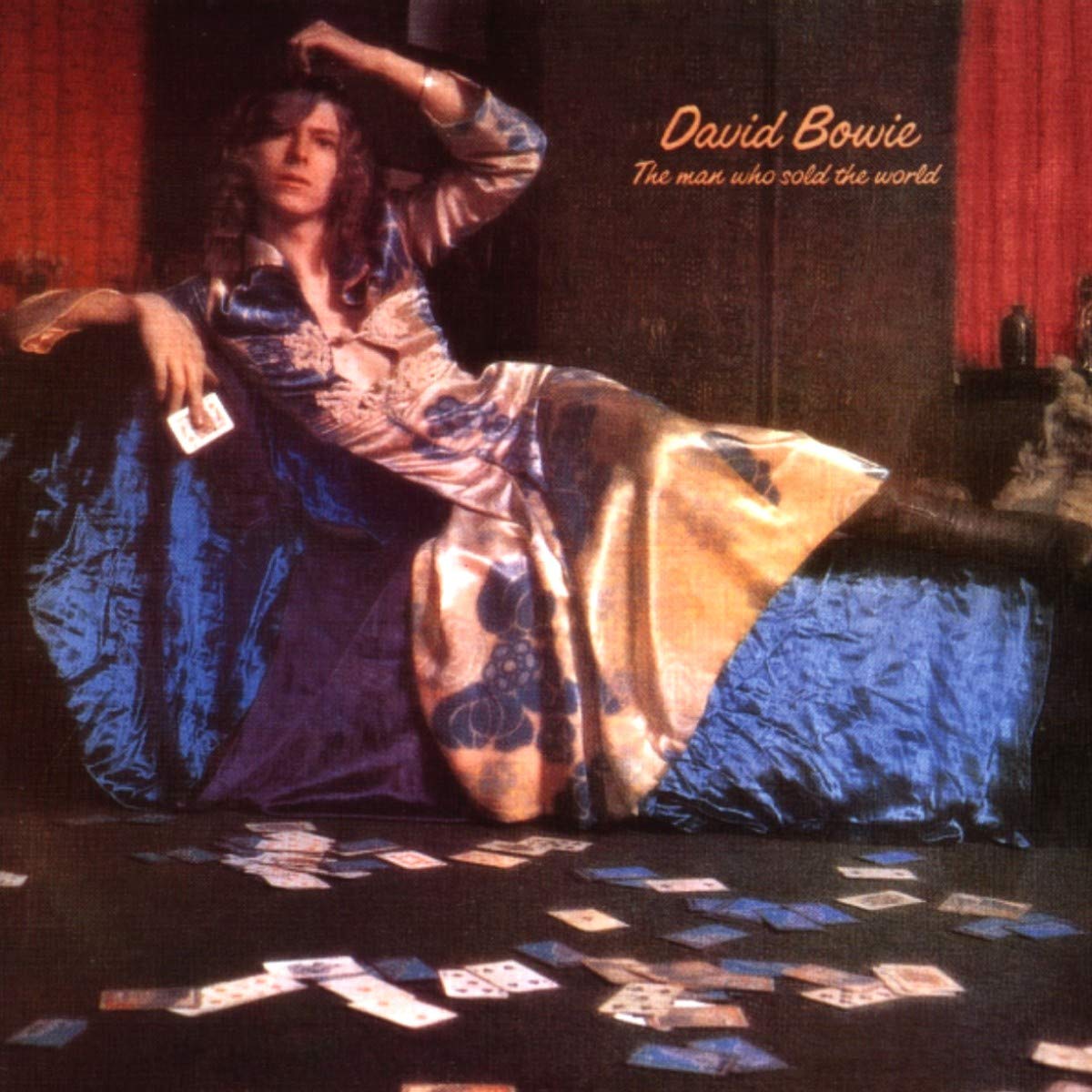 Take another look at the cover of The Man Who Sold the World: David Bowie, reclining on a chaise longue in his living room, wearing a dress that made him look more like Mariah Carey or a woman in a Victorian painting than the rock star he would eventually become. As appropriate as it seems for Bowie, it may still feel unfamiliar to you if you’re old enough to remember buying the album on vinyl. For its initial release in the US in 1970, Mercury Records’ American division went with the original design – a bafflingly ugly cartoon of a John Wayne-like figure – after flatly rejecting Bowie’s new idea; the label’s British division acceded to the dress photo for the album’s UK release a few months later, only for RCA Records to use a completely new image for a 1972 worldwide reissue. It wasn’t until 1990 that the dress photo became The Man Who Sold the World’s official cover. Even now, it remains a striking image, and were the record released today one can imagine angry parents trying to get it pulled from shelves, or J.K. Rowling penning another pearl-clutching essay about the collapse of gender as she knows it.

No matter which version of the cover became canon, The Man Who Sold the World would have been remembered as David Bowie’s first truly great album. After two self-titled records (his 1967 debut and its 1969 follow-up, later renamed as Space Oddity) that mixed folk and psychedelia and even vaudeville, The Man Who Sold the World was Bowie’s third attempt to introduce himself to a wide audience – and it still failed to chart on either side of the Atlantic when it first came out. But the harder rock sound and gender-bending persona that Bowie adopted on this album would soon prove very influential, paving the way for not just his evolution into Ziggy Stardust but the sleazy decadence of glam rock.

The very first thing you hear on The Man Who Sold the World – an eerie, shrieking guitar – is one of rock ‘n’ roll’s greatest album-opening sounds, up there with George Harrison’s guitar chord on “A Hard Day’s Night” or the snare shot on “Like a Rolling Stone.” The song that follows, “The Width of a Circle,” sounds closer to Led Zeppelin than anything on Bowie’s eponymous albums, in both musical and lyrical content. Bowie is at his campy, theatrical best here, spinning a supernatural yarn that begins with him meeting his doppelgänger in a park and ends with him getting sodomized by a demonic figure in Hell. With lyrics like “My knees were shaking, my cheeks aflame/ He said, ‘You’ll never go down to the gods again!’” it’s the kind of song you wouldn’t dare play unless you were damn certain your parents wouldn’t hear it.

The artistic leap between Space Oddity and The Man Who Sold the World was about as big as the leap between Neil Young and Everybody Knows This Is Nowhere, and for similar reasons. Shortly after the release of his second album, Bowie desired a full-time backing band, and by the time he started work on his third he had reunited with Space Oddity bassist/producer Tony Visconti and enlisted guitarist Mick Ronson and drummer Mick Woodmansey. (Ronson and Woodmansey stuck with Bowie through the formation and dissolution of the Spiders from Mars, while Visconti would go on to become one of Bowie’s most important collaborators.) Ronson, Visconti and Woodmansey were to Bowie what Crazy Horse was to Young, pushing the singer-songwriter into louder, looser territory. Particularly crucial was Ronson, who also helped arrange and compose much of the music – whether he’s keeping “The Width of a Circle” in motion over its eight-minute runtime or laying down bluesy, heavy riffs on “Black Country Rock” and “She Shook Me Cold,” Ronson’s guitarwork is as essential to The Man Who Sold the World as Bowie’s singing.

Speaking of whom: The wistful hippie dreams that Bowie had envisioned on previous outings were curdling into the stuff of nightmares. The sexual encounter (with a human woman) that Bowie details on “She Shook Me Cold” sounds more depraved than delightful, which is to say it’s another song that you only want to listen to with headphones on. Equally discomfiting is “Running Gun Blues,” about a Vietnam War veteran who’s both traumatized by and addicted to the violence he sees and commits. And years before the threat of an artificial intelligence apocalypse became popular entertainment, Bowie wrote “Saviour Machine,” the tale of an all-knowing computer that comes to realize it has no use in a world without problems like war and hunger. It’s all enough to drive a man insane, and that’s precisely what Bowie laments on “All the Madmen,” a song inspired by his schizophrenic half-brother Terry Burns. “I’d rather stay here/ With all the madmen,” Bowie sings, “than perish with the sad men living free.” He makes a convincing argument.

Still, it’s the title track that’s the most widely recognized cut here, largely thanks to Nirvana’s unexpected cover for their MTV Unplugged appearance. (It would have been an obvious choice for a single had Mercury decided to officially release any for the album.) The original can’t hold a candle to Kurt Cobain’s anguished version, and it feels like an outlier on the album. Ronson’s guitar playing is much lighter than it is on other songs, and Woodmansey’s percussion has a bit of a Latin flair. But Bowie’s performance feels more dramatic than theatrical here, and as opposed to the over-the-top and fanciful imagery that appears on other songs, the scene he sets on “The Man Who Sold the World” is cryptic and impressionistic, almost as if he knows more than he’s willing to tell. When Cobain sang the song, it sounded as if he viewed himself as the man in the title, or felt that he could have become him were he not constantly conflicted about his band’s commercial success and his artistic integrity. But when Bowie wrote the song, he was just another British musician struggling to build a career in the void left by the Beatles, wondering just what a man would have to do in order to have the world to sell.

For starters, he put on a dress. Even though Mercury was unwilling to release The Man Who Sold the World stateside with Bowie in such a on the cover, they could do nothing to prevent him from wearing it when he went to America on a publicity tour. “In his floral-patterned velvet midi-gown […] David Bowie is ravishing, almost disconcertingly reminiscent of Lauren Bacall,” began John Mendelsohn’s profile of the musician in Rolling Stone, published in early April 1971. Bowie was far from a known commodity at the time, and he leaned into his inscrutability with a series of increasingly outlandish claims – that Space Oddity was about “his experiences as a shaven-headed transvestite,” that he planned to dress up as Cleopatra onstage, that he had written and performed a play about a Tibetan boy living under the thumb of Mao Zedong. “I refuse to be thought of as mediocre,” he quipped, as if such a thing were possible.