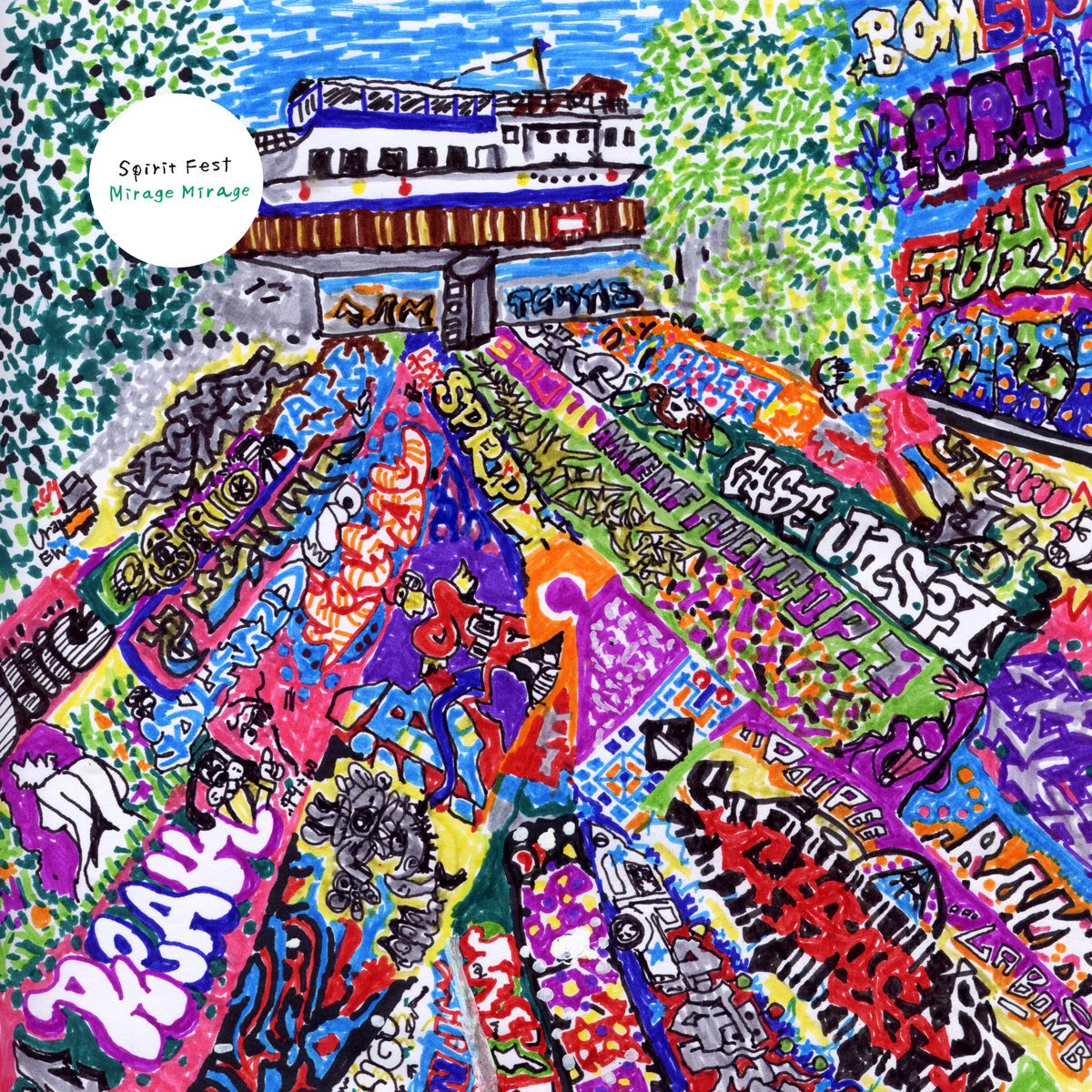 The latest from Spirit Fest opens with the sound of a children’s playground and ends with the clicking of bicycle spokes. These sonic bookends are a good summation of Mirage Mirage, where, for a little more than an hour, the band exercises their melodic gifts with a spirit of childlike innocence. Experimental yet completely accessible, these songs sound like (and sometimes are) the result of friends hanging out – pals that happen to be members of an indie-pop supergroup whose home base stretches from Norwich and Munich to Tokyo. With its easy chemistry and avant-pop hooks, their third album demonstrates that, in a chaotic world, there can still be peace and harmony.

Opener “Yesteryears” evokes a nostalgic mood by its name alone. A male-female vocal duo coos out a wistful melody over a softly picked acoustic guitar, with those playground sounds and an answering machine message building a layered, hummable audio collage. Running just under three and a half minutes, the cut ends with its chord sequence unresolved, as if just beginning to open up the band’s memories for the rest of the album.

If there’s a single here, it’s the title cut, with a recorder providing sweet countermelody to Markus Acher’s soft lead vocal. “We left the city/ We left these houses/ We walked as far as we could go/ To not be back.” But he does come back for the chorus: “Mirage mirage/ When the ghost disappears/ We see the ghost is us.” The song glides on a sweet hook that tells a mournful story, and when acoustic rhythm guitars chime in unison for the bridge, it’s as if the band is carrying you along on its, well, spirit flight, and the effect is fairly breathtaking.

Spirit Fest formed in 2016 when Markus Acher invited Saya and Takashi Ueno, from Japanese duo Tenniscoats, to play a Munich festival that his band The Notwist was curating. Acher’s bandmate Cico Beck and Jam Money’s Mat Fowler also came on board. The far-flung musicians came together to make a sound that was worlds away from The Notwist’s heavy beginnings, but fans of lighter Neon Golden tracks like “One Step Inside Doesn’t Mean You Understand” might recognize the Acher touch. Still, it’s the Tenniscoats touch that prevails, in its unassuming way.

Mirage Mirage was recorded in summertime, and much of the album has a sunny feel, but there’s a somber undercurrent. “Mohikone” uses the same kind of delicate arrangement employed throughout the album, but in this case it comes off like a toy band leading a funeral dirge. Haunting, wordless vocals echo the ghost of “Mirage,” but its torment is more than just the ache of memory. The nearly seven-minute “The Snow Falls on Everyone” closes the first disc of the vinyl edition on a bittersweet note that may be the album’s best track. Acoustic guitars and synths play off a gorgeous minor-key melody, as the male lead sings over plaintive female backup that sings, “Snow falls.” While much of the album has a summer feeling, this would have been the perfect soundtrack for a wintry self-isolation, staring outside the window as the world disappears.

Mirage Mirage plays like a poppier version of the DIY aesthetic heard on the delightful Tenniscoats-compiled collection Minna Miteru. Most songs here run at a radio-friendly three to five minutes, but the album’s key tracks are the three longer songs. In addition to “Snow Falls,” the psych-folk “Zenbu Honto (Every Thing Is Everything)” sustains a psych-folk melody for seven minutes. Closer “Saigo Song” is on the surface less ambitious, its fragile, childlike melody cycling, without a bridge, over the course of nearly eight minutes. But that circular, repetitive structure feels something like resilience, and as the arrangement continues, additional vocals and instruments (including percussion and slide guitar) add texture. Listen to everything that goes on around you, the band seems to say; that too can be part of our music.