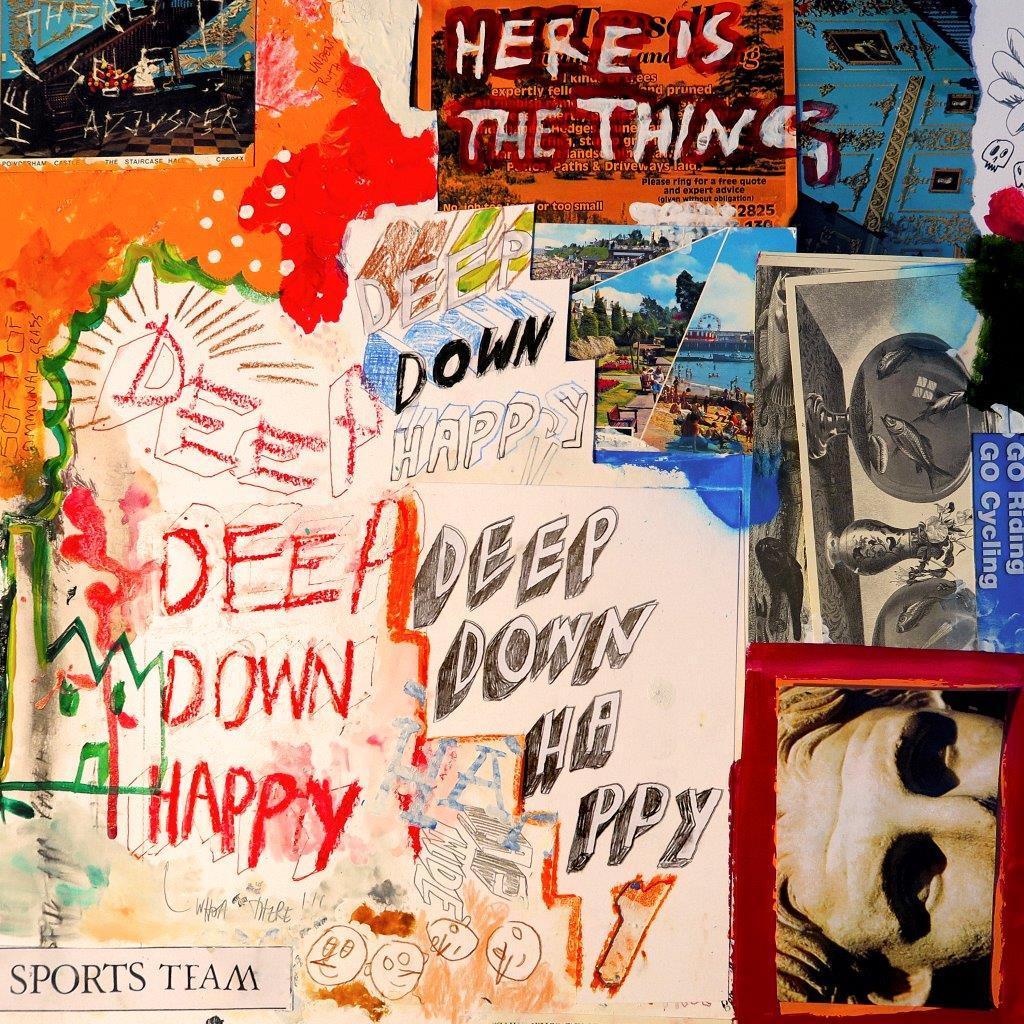 You can’t fake exuberance—that propulsive electricity that’s obvious from the first note. If there’s one quality that’s defined Sports Team since they’ve started, it would be their boundless energy, the type that easily spreads to all who hear them. You can both hear and feel that spirit throughout their debut album, Deep Down Happy. While the songwriting may not always be up to snuff, the tunes that do connect have all the power of surfing on a monster wave.

That wave comes crashing in immediately with “Lander,” which explodes out of the gate with a shout and an aggressive group of shredding guitars. But Sports Team knows when to pull back a bit too, letting Alex Rice speak-sing his way through a couple of verses as the music quiets down, only to roar back with a throat-tearing delivery and a confluence of instruments. “Here It Comes Again” is all tense, brisk guitar lines that turn into ripping chords over the chorus, like the Strokes at double-speed. Closing track “Stations of the Cross” skates along with a sharp groove, built out of a crowing guitar riff and head-nodding bass line. It’s a strong soundscape for Rice to reflect on the endless Groundhog Day of adult life, singing “Weekends follow weekends like the stations of the cross/ And it’s not that you’re unhappy, you’re just happy on and off.”

But if you only had two songs to listen to from Deep Down Happy, they should be “Here’s the Thing” and “Fishing.” With playful guitar and rapid vocals on the former, the band does a takedown of the false idioms and sayings found in a typical upbringing, like “If you’re barely getting by, then that’s your fault,” or “companies care for the people they employ,” or “discrimination doesn’t happen anymore.” Each verse punctures the bubble of these tropes with a shout of “Lies, lies, lies.” For “Fishing,” it’s all crunchy guitars and the desperate search for a moment of calm in the chaos of everyday life, where Rice sarcastically repeats the unwanted advice of “If the band doesn’t work, just get a regular job,” later shouting “I don’t need no conversation, please.”

While Sports Team excels when they’re dialing their sound and speed up to 11, they also pull off some midtempo numbers with aplomb. “Going Soft” is all slicing guitar chords and the occasional clatter of distortion. “The Races” saunters along with a slippery bass line and a singalong, wordless chorus. “Camel Crew” moves effortlessly between taut guitars and noisy bursts.

Unfortunately, the rest of the songs on Deep Down Happy have trouble standing out. “Long Hot Summer” and “Born Sugar” try to slow down a bit but mainly fall flat, without much in the way of memorable melodies or the energy to paint over those flaws. “Feels Like Fun” is more upbeat with a cool Interpol guitar line, but the rest of the band doesn’t reach the song’s potential. “Kutcher” tries to use the 2000s celebrity as a kiss-off to a failed relationship, but it feels oddly placed and the music mainly plays second fiddle to Rice’s vocals, which only highlights the awkwardness. The album would’ve been better served by including some of their earlier tracks like “M5” instead.

Despite some weak tunes and a mainly straightforward rock sound that needs to be tailored carefully to work for a full-length album, Deep Down Happy still offers plenty of enjoyment. Most of the songs will be thrilling to hear live, where you can just jump around and let the sound wash over you. The promise of Sports Team can be heard throughout their debut, even if they don’t quite hit the mark. If they can take their intensity and focus it on crafting tracks as strong as “Fishing” or “Here’s the Thing,” they’ll make audiences deep down happy for years to come.

Their open hand reaches into the shadows and beckons us to pull us closer to the light. …