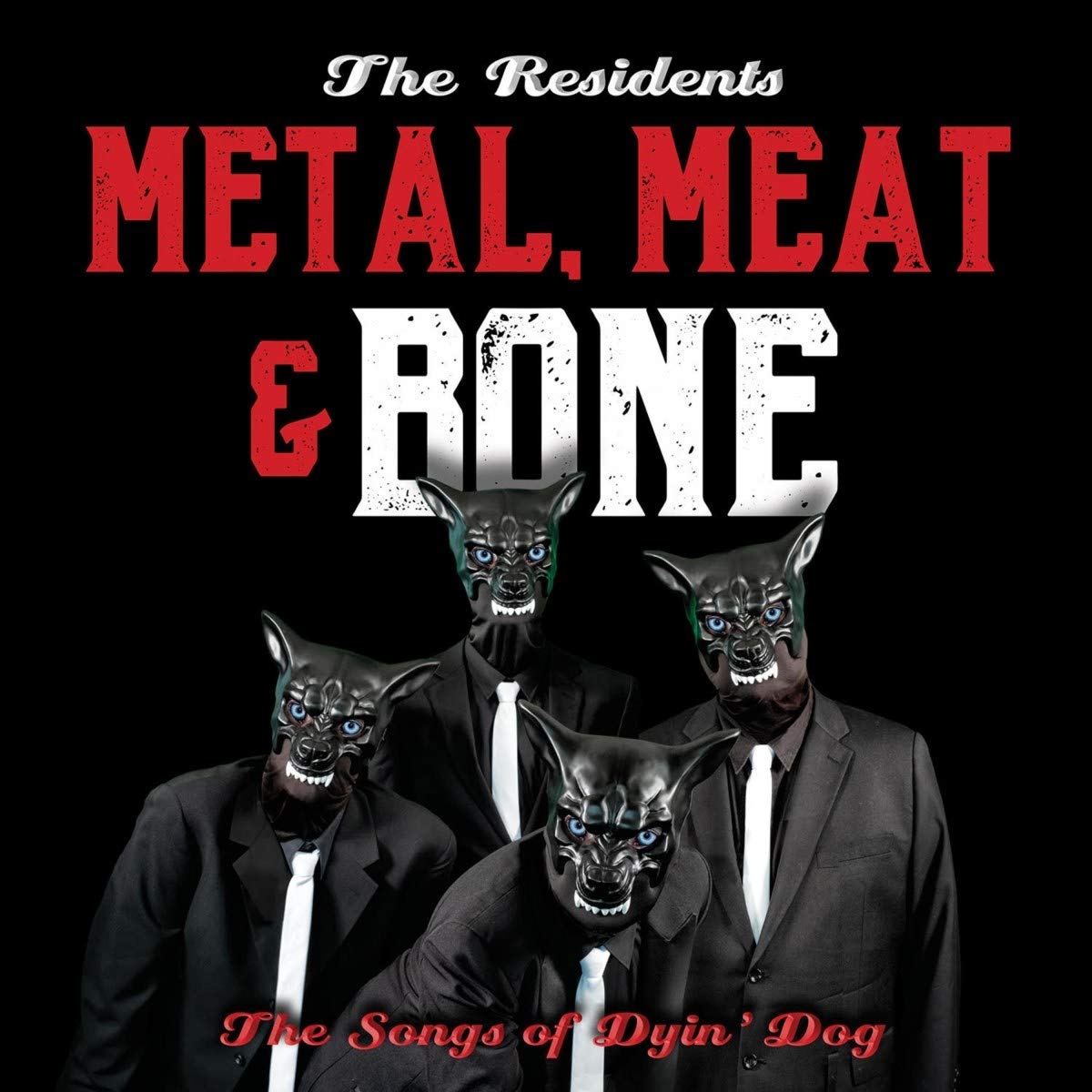 Merry pranksters The Residents return with (according to some sources) the 60th album in a long and winding career, and the first since the death of long-time member Hardy Fox. As with so much of their deliberately mysterious practice, Metal, Meat & Bone: The Songs of Dyin’ Dog comes with a legend or fable to explain its arrival; this double album reputedly compiles the work of elusive and long-forgotten bluesman Alvin ‘Dyin’ Dog’ Snow, along with The Residents’ covers of Snow’s tracks and songs inspired by him. The storyline, as it were, kicked off in 2019 with the band sponsoring a release of a nine-disc 7” box set of Snow’s extant recordings, complete with an envelope labelled “Alvin’s Polaroids.” Those tracks form the second album of this set, but before that, there’s an album’s worth of “covers” to work through.

As with so much of The Residents’ work, the music pulses through a discrete, detailed and limited series of forms. There’s the outsider schtick, the Southern Gothic folk routines and, increasingly, the intricately orchestrated and clattering rockisms that echo Tom Waits’ middle-period. “Hungry Hound” is definitely of the Southern Gothic persuasion, with a gently struck xylophone matched with long-drawn strings, fluttering beneath a bleak and murderous tale of a dead dog, while “DIE! DIE! DIE!” features The Pixies’ Black Francis in fine growling-shouting form. The tightly wound and deliberately unsettling outsider approach is evident on “River Runs Dry,” “Momma Don’t Go” and “She Called Me Doggy” where the crisp production and at times Lynchian undercurrents are further bolstered by the off-kilter vocals. “Pass for White” is similarly ramshackle in its lolloping along and, as before, it’s the vocals – here a kind of Booji Boy falsetto – that cements the strangeness.

“The Dog’s Dream” features the vocals of an unnamed woman (both Carla Fabrizio and Sivan Lioncub are listed as album participants), and the song manages to be darkly poppy throughout, not a million miles away from a restrained Sonic Youth B-side circa Daydream Nation. She returns to sing on “Tell Me,” which with its gathering strings and multitracked vocals is an anxiety-inducing discussion of ethnicity, and it might be her again, whispering, in the wheezing strangeness of “Cold as a Corpse.”

If anything, though, it’s the second disc that provides the entirely unexpected listening pleasure. According to The Residents’ fansite, the band had long wished to record a blues album but had never found the right concept. With the discovery – or invention – of Dyin’ Dog, their way into the genre was secure and the songs produced as a result, rendered here as the recordings of Alvin Snow, are a revelation. “Bury My Bone” sits somewhere between the blues stomp of Waits and a roughly recorded zydeco, the whiskey-soused vocals sitting perfectly inside the fantasy this song conjures. “DIE! DIE! DIE!” matches a garrulous vocal with deft and low-key barroom piano, loose in the right places and tight at the moments where everything stops … and then crashes into motion once more. “River Runs Dry” similarly thumps along, while “The Dog’s Dream” manages to sound briefly hopeful before the weight of those grim vocals pierces the illusion and renders the lyrics, sung on the first album by a woman, even darker. “I Know” hums along like an escapee from a Wall of Voodo album and “Pass for White” is here strident and powerful, not an exercise in deliberate strangeness like The Residents’ version but an aching statement of identity. “Momma Don’t Go” similarly rocks along, the complete anthesis of Metal, Meat & Bone’s other version which would be more at home on 1980’s Commercial Album.

Taken as a whole, it’s difficult to say if the double album hangs together, either musically or conceptually. The Residents are rarely a band one looks to for an evening’s background filler, but the dedication to their mission, however obscure that might at times be, is overwhelming. and through it all they have both charted the way and made room for a host of artists to follow. If, after so long, it takes a conceptual prank like this to produce one album of arresting, upsetting, irritating and intermittently wonderful pieces and another album of adept and thoroughly enjoyable songs designed to be taken at face value, then who can begrudge them that.