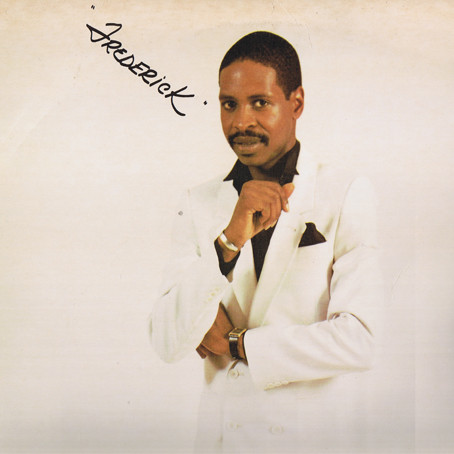 Influenced by such legendary soul men as Al Green, Marvin Gaye and Stevie Wonder, Cleveland-born Frederick Davis began singing and playing music when he was 10. He did a stint in the Navy and became a promising young boxer. Yet Davis’ enduring legacy emerged from his time on the writing staff at Ohio label Time Traxx Records, which resulted in a demo that became one of the great slow jams of the ‘80s. Unfortunately, limited to a regional company, he never broke as wide as he should have. Released in 1985 on Heat Records, Frederick, his self-titled, single-name debut album, proved the hit wasn’t just a fluke.

“Somebody Won’t Sleep Tonight” opens the album a bit counterintuitively with a ballad, but that title announces, innocently enough, the lover man’s agenda. He ups the tempo slightly with “I Love You,” as simple and old-fashioned and evergreen a sentiment as has ever been crooned, but Davis sells it. The drum sound may be of the ‘80s, but they’re real drums, and as H.V. Lee sets down a steady beat, it’s like a pulsing heart, with Davis in full control of his vocal gift, turning a time-worn phrase with just the right bit of embellishment to get a woman’s interest but not enough to show off—there will be time for that soon enough.

For the most part, this is a mellow, late-night album, the A-side cranking up the beat to boogie dancefloor level with “Move On” directed at anybody who has resisted his entreaties so far. Co-written by producer Darrell Lee and what is credited as TTWS (“Time Traxx writer staff,” which may well mean Davis himself), the smart song structure gives the leader a chance to show he can shine on more than just a romantic ballad, and it should have been as big a hit as the lead single.

As often happened back in the day, the B-side opens with the reason you bought the album, a bedroom playlet structured as call and response. A smooth keyboard lick leads to Davis’ spoken-word call: “You know what, baby, I was thinkin’/ What you said to me last night/ And I know what you want,” taking that last word with just a hint of lasciviousness. Duet partner Janice Dowlen follows singing, her voice kind of breaking in excitement: “Sometimes at night I call your name/ Then I catch myself from falling/ Where there is love sometimes there is pain/ Still my love is growing so/ Please be gentle/ Please be gentle when you’re loving me.”

It’s incredibly explicit, and romantic, and ridiculously cheesy, but any dictionary definition of quiet storm radio should include, along with props to Smokey Robinson, a picture of the 12” label. Davis and Dowlen have a great melodramatic chemistry as they coo at each other: “I’ll take my time, I’ll wait for you/ ‘Cause I know you’ll be coming.” Believe it or not, the double entendre is more apparent in print than on record; Dowlen pours out her heart and soul like a bedroom diva, but even as the pair join together in the orgasmic chorus of “Calling/ Calling/ Calling your name,” the tempo and spare arrangement has a kind of innocence. Davis is the epitome of control, while Dowlen squeaks high and coos low, her partner inspiring her to run the gamut of her dramatic instrument.

It’s all built on a slow drum shuffle with a few selectively up-pitched keyboard fills. The two singers do the heavy lifting, creating the track’s cresting plot on melody and acting talent. As raunchy and braggodocious as it reads, Davis is in the end modest about his prowess. When the pair is done with their climactic session, he returns to spoken word: “I love it when we make love/ I think we get along really well/ When the lights are down low, and we’re just holding each other so tight.” It’s explicit and sweet, and on the, ahem, extended version, when the vocals drop out and the keyboard riff comes in on its cool love-swept bed, it’s kind of breathtaking. You can take a minute to rest now.

“Gentle (Calling Your Name)” became a national hit, bubbling under on the Billboard pop chart and reaching 48 on the R&B list. It’s the highlight of the album and of Frederick’s career, but the rest of Frederick is far from filler. The hit is followed by the terrific “Girl I Know You’re Lonely,” a duet with Lyn Jo Jones, and at this point, Frederick has earned his welcome so totally that you wish these songs would last longer. He closes the scant eight-track album with two up-tempo numbers, including the stellar “That Body,” which may be the most ‘80s-like track here. Still, “Gentle” was the career-maker, or at least it should have been. The label could barely keep the single in stores, but the album was under-promoted, perhaps partly due to issues between Time Traxx, who had Davis under a limited contract, and Heat Records, who signed a long-term deal with Dowlen. Those conflicting contracts meant that the hot duo couldn’t tour together. Davis’ signature song had some oldies traction, but he has long since been known as a one-hit wonder.

The story doesn’t end there; the greying Frederick released the old school throwback “I Can’t Help But Love You” in 2017, which was a hit on the UK soul charts, and his voice is as strong as ever. The album Real Love came out just this year. Frederick, that long-ago debut, has never been reissued, though you can still pick it up inexpensively. Anybody who loves ‘80s soul should track it down, and anybody who remembers him from way back when, look up his recent work; it’s like he never went away.