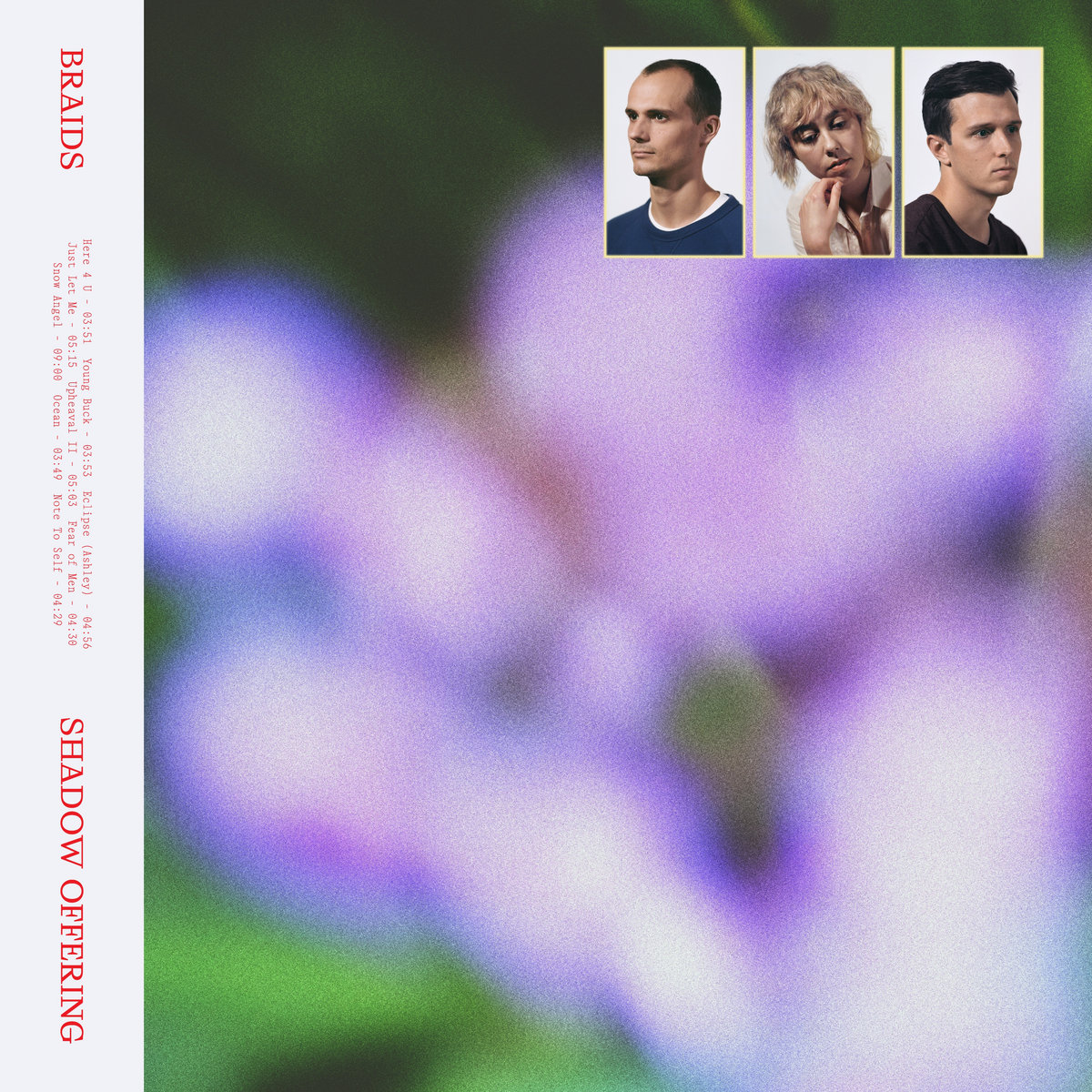 For Shadow Offering, Braids took the longest amount of time between releases in their career to date. It was definitely time well-spent. The trio has sharpened their songwriting to craft the group’s strongest album yet. It keeps the more accessible approach of Deep in the Iris but advances their sound to a quick-footed compilation of airy synths, silvery guitars and creative percussion.

Braids have always matched their music to the emotional resonance of Raphaelle Standell-Preston’s lyrics, a trend that continues for this record. But Shadow Offering finds the band in a far more supportive and less chaotic place, for the most part. The result breezes along lightly, with melodies made of more strength and personality than the percussive noise the group can unleash.

The change is apparent from the beautiful opener, “Here 4 U,” which anchors Taylor Smith’s floating synth atmospherics with heavy piano chords, the chorus elevating the song with additional flourishes. It’s a great setting for powerful lyrics about standing by a loved one, even when they’re at their lowest or when they lash out. The band covers similar territory on the grander “Just Let Me,” where Standell-Preston asks a loved one to open up to her. Though the ongoing struggle exhausts her, she finds the resolve to stand by their side. “There’s sometimes/ So much noise between us/ And I wish we could just be/ Quiet for a moment,” she sings. Musically, it’s a vibrant bed of synths, guitar and other little touches that prick your ears in all the right ways.

Rather than playing a supporting role, “Ocean,” a gem of a tune, finds Standell-Preston making a heartfelt admission of love towards someone she describes as the “Epitome of rejection, singing “I’m a bag of heavy feelings for you/ For what we have together.” The song’s gentle keyboard melody and feather-touch guitar work float like a calm sea, where you can close your eyes and let it wash over you. It’s a marvelously graceful, serene song, the type that will hush audiences for its duration as they get drawn into its majesty.

For the opposite of the relationship in “Ocean,” Braids have “Young Buck,” their best dance groove ever and the perfect match for a song about heady, mixed-up feelings of desire. Even as Standell-Preston sings about how a night of lust is “pointless,” she admits that “Everyone needs a little numb, once in a while.” It’s all anticipatory moments buoyed by club-ready percussion, rewarded when the monster chorus hits and the rhythm takes off.

Not all the relationships in Shadow Offering are filled with such strife. “Eclipse (Ashley)” glides with an ethereal piano line and Austin Tufts’ pounding, earthy drums, a gentle swell for this song dedicated to Standell-Preston’s best friend. It’s the type of friendship where she finds strength through imagery of times together. “It’s in the tall grass/ It’s in their long hair/ In our dark eyes,” she sings lovingly, as shuddering guitars and crashing symbols punctuate her dedication.

While all of Braids are playing at their peak, Standell-Preston’s voice is the true star of Shadow Offering, bringing a new level of power and control to her delivery. Over the earthquake rumble of “Upheaval II,” she moves from fragile phrases at the top of her range to belting out notes magnificently. “Fear of Men” is similar, where she turns her fear and frustration into a powerhouse performance.

The most divisive song on Shadow Offering is “Snow Angel,” a nine-minute epic that’s musically brilliant but falters a bit with lyrics that try to do too much. The tune grows wonderfully from a bubbling synth line and bright guitar patterns, ebbing and rising around Standell-Preston’s vocals. But a spoken-word segment that tries to take on the state of the world mostly falls flat. Standell-Preston flickers between white privilege, fake news, deportation, climate change and more. These are all heavy subjects that deserve attention, but there’s not enough room in the song to do so effectively. The only portion that works is where Standell-Preston anxiously questions, “Should I even have a child at all?/ This world is full up/ I wanna be a mother, but I shouldn’t bring in another.” Limiting this track to one topic would’ve done wonders for it. As it is, it feels like a missed opportunity.

Despite that miscalculation, Shadow Offering has much to enjoy, letting personal issues of love and relationships guide Braids to excellent songwriting and melodies. The album is filled with personal struggles, desires and questions that should be relatable to any listener. Through these songs, Braids sees the darkness inside others and themselves and strives to find hope and love among it. It’s an open hand reaching into the shadows, beckoning to pull us closer to the light.