August 10, 2020
Home Music Discography Discography: David Bowie: The Rise and Fall of Ziggy Stardust and the Spiders From Mars 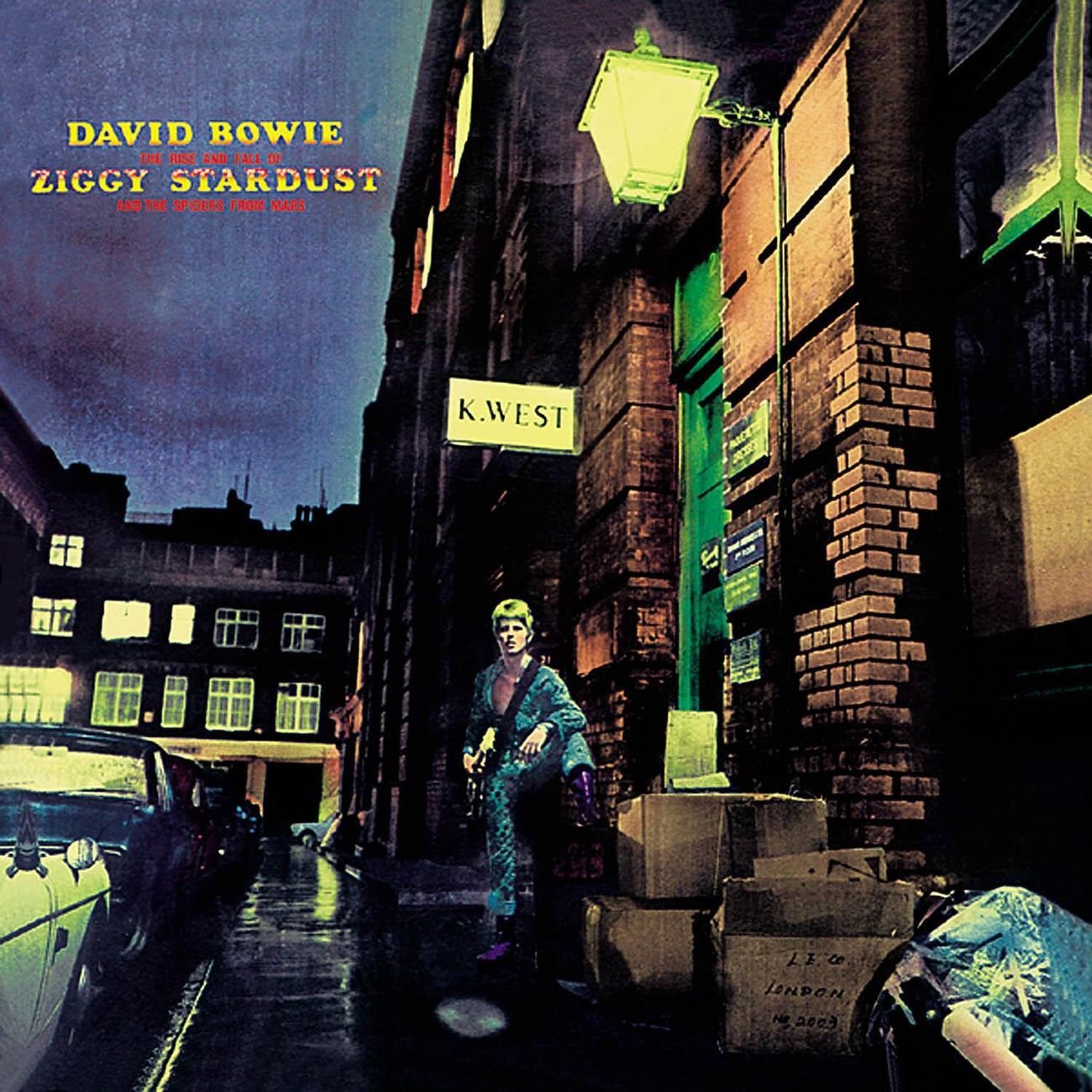 The first clue that David Bowie had re-invented himself on 1972’s The Rise and Fall of Ziggy Stardust and the Spiders from Mars can be found right on the cover, where his name appears in the same size and font as his fictional alter ego. Having released the milestone album Hunky Dory only six months earlier, Bowie’s creativity and ambition had gone into full supernova mode with a tight, confident band and an epic story to tell. Unlike some of the more self-indulgent concept albums of the era, Ziggy manages to be novelistic in scope while stacking one brilliant pop song after another for its complete runtime. While Hunky Dory‘s piano-centric compositions showcased Bowie’s lyric and melodic genius, the 11 songs on Ziggy Stardust feel designed for stage-strutting spectacle.

The album’s dramatic arc is established in the opener, “Five Years,” which sets up the story of a mysterious messenger warning that the end is coming soon–“Earth is really dying.” The lyrics don’t offer explanations, but provide snapshots of everyday people’s reactions to the ominous news (“A cop knelt and kissed the feet of a priest/ and a queer threw up at the sight of that“). But the key to the song, and to the rest of the album’s story, can be found in the quiet line that rounds out an early verse: “I never thought I’d need so many people.” The otherworldly vibe that Bowie had been exploring since “Space Oddity” finds a very grounded and human angle here, in a sentiment that any earthling can relate to. It’s the core of what made Bowie so vital across the decades. Facing down an impending apocalypse, he shares the message that it’s time for love, togetherness and–especially–rock ‘n’ roll.

Reconvening many of the same crew he assembled for Hunky Dory, Bowie fully occupies the frontman role, allowing the band to shine on their own. Mick Ronson’s razor-sharp Les Paul sound gives shape and texture to many of the tunes, and his presence is nearly as strong as Bowie’s own. (Witness the sweetly harmonizing guitar lines at the end of “It Ain’t Easy.”) Mick Woodmansey and Trevor Bolder return on drums and bass, and these three together personify the Spiders from Mars–a real-life band playing the part of a fictional one, just as Bowie himself adopted the spaceman persona. (Rick Wakeman, who went on to join prog-rock pioneers Yes, played most of the piano and keyboard parts.) Over the course of 11 songs, Ziggy emerges as a kind of emissary from space, come to Earth to transform himself into a rockstar in order to save mankind. Hints of subversive elements come through in the gender-swapping pronouns of “Lady Stardust” and in the raunchy swagger of “Suffragette City,” with its false ending and the shouted phrase, “Wham, bam, thank you ma’am!” but the album’s centerpiece is “Ziggy Stardust” itself. Built around Ronson’s glittering riff, the song tells the whole epic in capsule form, from Ziggy’s jamming with his band to the tragic end when he “sucked up into his mind” after making love with his ego. Related in third-person, the story is cheeky and strange, and encapsulates the imaginative songwriting, lean performance and far-out vibe of the whole album.

Other popular artists had adopted personas as part of their act–Little Richard and James Brown come to mind–but with Ziggy, Bowie pushed the conceit farther than it had ever gone. He wasn’t just exhibiting a new hair style and cool outfits, he was inventing a character out of thin air and then occupying that role like a method actor. It was a transformation that he would repeat throughout his career, from Aladdin Sane to the Thin White Duke, and this reinvention was accompanied by genre-hopping from the glam rock of Ziggy Stardust to the darker and then poppier stuff that followed. A crucial part of Bowie’s legacy rests on how much that spirit of reinvention influenced the many artists who followed. Prince seems like he could have been a Bowie character himself, and the same for St. Vincent, Lady Gaga, Janelle Monáe and a whole list of shape-shifting pop stars who surely listened to Bowie’s masterpiece on repeat while staring at the album art and absorbing it all. Reinvention is a form of immortality, and Bowie seemed to crack the code.

Like most of Bowie’s album covers, The Rise and Fall of Ziggy Stardust and the Spiders from Mars shows the singer in spotlit isolation. The colorized image depicts Bowie/Ziggy standing on a trash-strewn London street on a drizzly night, guitar strapped over his shoulder under a gas light and a shop sign that reads, tantalizingly, “K. West” (Quest?). He’s alone, without his band, like a lost soul that has just beamed down from another world, with frizzed-out orange hair and a jump suit open halfway down his chest. The imagery hints at shades of A Clockwork Orange and Dr. Who, while the Ziggy story prefigures themes from Close Encounters and E.T.. Far from cashing in on the space-age novelty of his earlier hit, “Space Oddity,” Bowie seems to have pinned down a cultural fascination with extraterrestrial visitation and alien life that still feels relevant and evocative today. And yet, the continuing appeal of the music doesn’t hang on an abstract idea but rather on the human-scale emotion embedded within the outlandish story. With the album closer, “Rock ‘n’ Roll Suicide,” Ziggy’s arc is completed as the song builds from a simple strumming guitar to orchestral cascades that recall the massive sweep of the Beatles’ “A Day in the Life.” Ziggy, who confessed to needing so many people, leaves the world he tried to save with a final, emphatic refrain: “You’re not alone!” It’s a message that resonates as much today as it did in 1972.

The Shadow of Violence