“The Prince of Darkness is upon the land,” rails a preacher near the beginning of Matewan (1987). “Now in the Bible his name is Beezlebub, Lord of the Flies. Right now on Earth today, his name is Bolshevist! Socialist! Communist! Union man! Lord of untruth, sower of evil seed, enemy of all that is good and pure. And this creature walks among us.”

The preacher, played by director John Sayles, then levels his eyes at his congregation. “What are we going to do about it?”

Even though Matewan takes place 100 years ago in 1920, there’s something eerily modern about these words. Sayles’ film is based on the Battle of Matewan (aka the Matewan Massacre), a shootout between striking coal miners in a small West Virginia town and the Baldwin-Felts Detective Agency thugs hired by the Stone Mountain Coal Company to protect its interests and crush a newly formed union. Today, it remains relevant as corporations and captains of industry continue to exploit workers and drum up fear about unions.

Shot by legendary cinematographer Haskell Wexler, Matewan breathes authenticity. Sayles and Wexler labored to get period details correct. The movie opens with miners working in near-darkness with only carbide headlamps to guide them. In order to recreate the terrifying conditions in which miners worked, Sayles and Wexler used little else besides these lamps to illuminate the opening scenes. It’s a hard life, one where cave-ins, fires, explosions and angry boss-men could prove fatal at any moment. 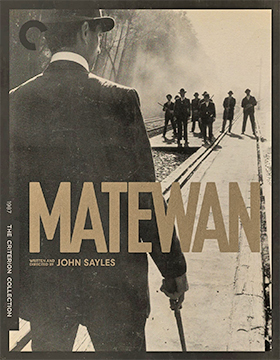 The movie begins with a fight, albeit not between the Baldwin-Felts men and the miners. A train full of Black workers (including James Earl Jones as real-life character Few Clothes) arrives to join Italian workers whom the company hopes will work for less money. After a skirmish with the locals who refuse to work, the Black and Italian men soon join their ranks in protest. Also arriving to town is Joe Kenehan, a pacifist sent by the United Mine Workers of America to help form a union. Played by Chris Cooper in his debut role, Kenehan looks to help the miners of Matewan with quiet dignity, hoping to avoid an increasingly likely confrontation with the Baldwin-Felts men.

If Kenehan is the moral center of Matewan, the young preacher, Danny, is the character who undergoes the most essential change. Played by Will Oldham, best-known as musician Bonnie “Prince” Billy, the teenaged preacher begins the film as an unquestioning miner who believes his bosses have his best interests in mind. Matewan is narrated by Danny as an old man, and we see the events leading to the massacre unfold via his eyes and his gradual realization that unjust and evil things are afoot in the name of profit. As the aforementioned preacher (Danny’s mentor) denounces socialism and unions, Danny slowly shifts sympathies as he’s indoctrinated into the violent struggle unfolding in his town.

Sayles pulls off a delicate balancing act by telling the stories of a mosaic of characters. Beyond Danny, Joe and Few Clothes, we meet Elma (Mary McDonnell), Danny’s mother, who is forced to house Baldwin-Felts detectives such as the despicable Hickey (Kevin Tighe) in her boardinghouse. Her faith is tested when Tighe pulls a gun on her son for refusing to pass him peas during a dinner. A straight-and-narrow cop, Sid Hatfield (Sayles regular David Strathairn), sides with the union over the men infiltrating Matewan. Meanwhile, other colorful locals such as Bridey Mae (Nancy Mette), a young woman who develops feelings for Joe, and the duplicitous C.E. Lively (Bob Gunton) round out the cast. Sayles never falls back on tropes in developing these characters into fully-formed individuals with complicated goals.

America has a complicated history with unions. After the Matewan Massacre, President Warren G. Harding sent federal troops to West Virginia to assist in the fight against striking workers. Much like Donald Trump today sending federal agents to Portland to stop protesters, this episode is one of many instances in our country’s history where the government has stepped in a way that is antithetical to the word “freedom.” Since then, thousands of people have been killed or arrested during strikes to protest unfair practices—all over profit.

Our president espouses the bravery and tenacity of coal miners, but as his recent actions in Portland demonstrate, he doesn’t truly care for the worker, the people who put themselves in harm’s way. He sides with the rich guys who fund their yachts with the backbreaking labor of others. So why are socialists and union men so terrifying to this day? They are the bogeyman creeping in the shadows to steal your money, Satan itself. Bullshit. It’s time to stop unfair labor practices and learn about their history in this country. Watching films like Matewan is a good first step.