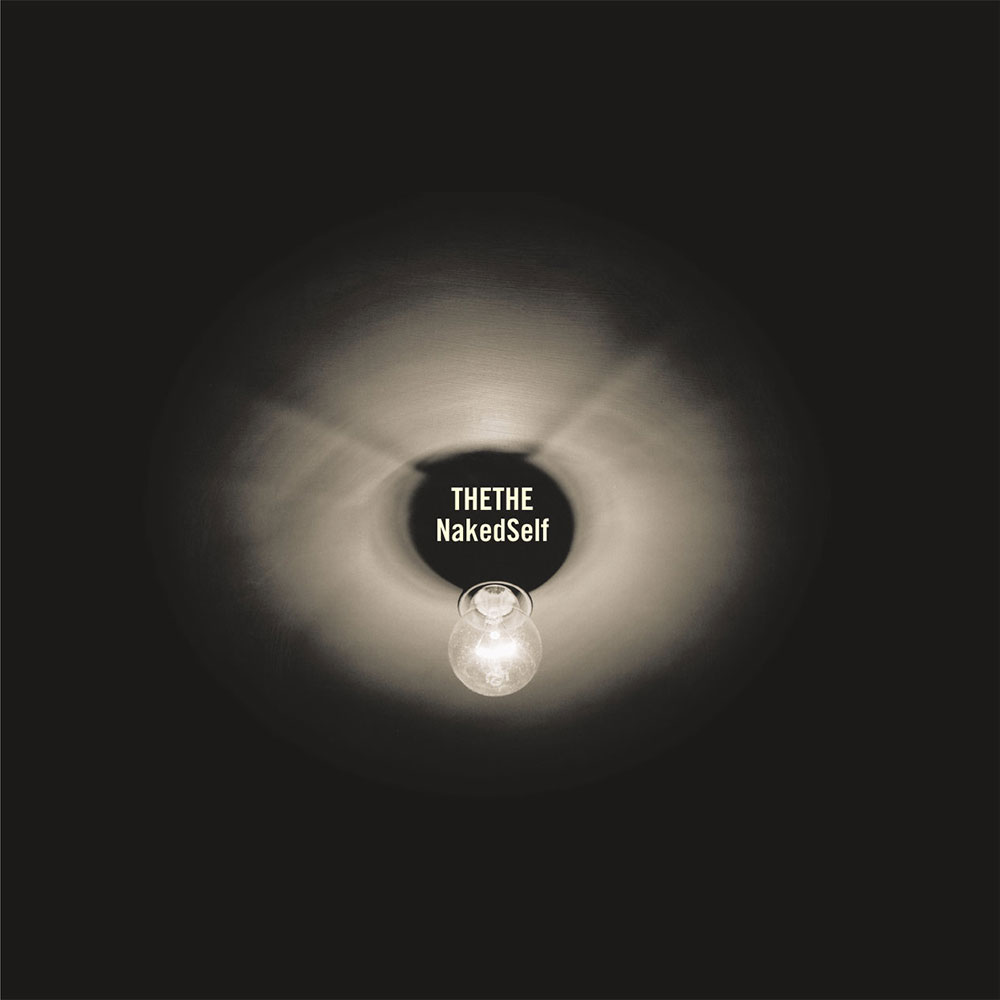 One can’t help but wonder if the execs at Nothing Records/Interscope had known how thoroughly inept they were in the handling of Matt Johnson’s sixth album as The The, NakedSelf, now 20 years old. Their default position for dealing with music that they might have thought difficult could be considered obfuscation.

Johnson’s trajectory had always been one of pressing hard against the machinery of the music industry, even while seeking to follow the path from obscurity to fame. After Burning Blue Soul, Johnson’s first album, released under his own name and therefore only a The The album in spirit, saw the light 1981 through the good offices of 4AD, he shifted towards corporate politics with a move to Epic, a subsidiary of CBS Records, for sophomore effort Soul Mining in 1983. That album’s three singles all performed well enough for Johnson’s next release, 1986’s Infected, to be accompanied by an internationally shot feature-length film comprised of videos for each of the album’s eight tracks. With a budget of £350,000 – practically unheard of at that time for what was, essentially, an indie act with limited appeal – Johnson would employ Throbbing Gristle’s Peter Christopherson (in his professional role with the design company Hipgnosis) and shoot videos in Bolivia, a brothel in New York and, somewhat more sedately, the Greenwich Power Station in London.

Between the bedsit introspection of his first two albums and enormously successful Infected, Johnson’s developing geopolitical awareness saw this third album mix melancholy self-analysis with an acerbic critique of Great Britain’s increasing role as a vassal state of the United States. This focus would become even more pronounced on 1989’s Mind Bomb where the drum machines, tape loops and synths were superseded by the intricate guitar work of post-Smiths Johnny Marr and a duet with Sinéad O’Connor on one of the album’s four singles. Internationally, the breakout track was “The Beat(en) Generation” which charted well in several territories, while the then-unfolding Salman Rushdie affair led Epic to pull the track “Armageddon Days Are Here (again)” as a possible single for fear that the lyric “Islam is rising/ the Christians mobilising …” might lead to further interfaith unpleasantness.

Having demonstrated that major label investment and faith would be rewarded, 1993’s Dusk would further confirm Johnson’s bankability, peaking at #2 in the UK album charts and producing three further singles that, while not breaking any records, all performed admirably given Johnson’s increasing prowess as a songwriter focused on a kind of unrelentingly critical introspection, mixing this with a recognition of the futility of life in an increasingly fragmented global context.

It’s here that the wheels start to come loose. Johnson’s next project, Hanky Panky, the fifth release as The The, is an attempt to, as the album’s liner notes put it, “The The-ize” the songs of Hank Williams. Johnson might very well be describing himself when he notes that Williams “transformed pure undiluted pain into simple songs of such profound truth and beauty” and the album is surprising in the way it brings the darkness of Williams’ songwriting to the fore. A tiny suffix at the bottom of the album liner notes that “Hanky Panky is the first in an occasional series of albums celebrating the great singer/songwriters”. It was not to be.

Perhaps Epic/CBS balked at the thought of a band and songwriter so continuously on the cusp of making the full crossover from bedsit to stadia now seeking to spend time on passion projects, or perhaps it was that after the positive reception and (admittedly limited) chart success of Hanky Panky and its sole single “I Saw the Light,” Johnson and fellow The The bandmember Eric Schermerhorn set to work on what would, after a six-year delay, become the experimental and noisy album Gun Sluts. Johnson recounts that when the executives from Sony (who had purchased CBS and Epic in 1987) heard the new album, they were horrified. The album, Johnson notes, is his version of Metal Machine Music, informed by his state of mind and listening habits but, as the Sony execs commented, without anything vaguely approaching a hit. In return, and led by his desire to remain true to his relationship with Sony, Johnson and Schermerhorn wrote NakedSelf which, first, arrived in time for the end of Johnson’s contract and, second, contained nothing resembling a hit either.

After a year of legal wrangling and with the relationship with Sony finished, Johnson took NakedSelf to Nothing Records and Universal Interscope and immediately regretted it. The general response to the album was one of a kind of baffled silence, to the point where, as he notes in an interview from the time:

“In Detroit I got a call from an NPR station. They said they’d been begging the label for copies of the album and they wouldn’t give them one. NPR had to beg and phone and beg, and eventually got one. Then the NPR affiliate had to send someone to drive 40 minutes to pick me up and take me to the station to do the interview because the record label wouldn’t do it. I’ve never known anything like it.”

Twenty years on, what is NakedSelf like? The first point is that Johnson’s decision to focus on musicianship, analogue processes and songs means that the album retains a warmth and depth of sound that makes it the natural companion to Hanky Panky, especially given the similarity between the topics Williams and Johnson explore. If anything, it’s NakedSelf that helps make sense of Hanky Panky, picking up on many of that album’s themes (already curated by Johnson to match his interests) and focuses them further. But more than that there’s also a continuity of emotion, the same sad insights and introspective moments that Johnson’s songs have always conjured, populated with the ordinary sufferers that make his work so easy to identify with. In keeping with his concerns, the album swings between lonely musings about the impossibility of love and a wider agonizing at the world in all of its cruelty. Of the first, there’s the narrator of “The Whisperers,” wondering “if it’s fear of loneliness or love/ That keeps people like that together/ Forever…,” or the unnamed woman of “December Sunlight” who is tired of wishing pain on the man who had hurt her and now believes that “She’d read it in her stars and now she felt it in her heart/ Life was gonna start getting better.” Of the second, “Global Eyes” warns us that “Market Force is the new dictator/ Manipulator & annihilator,” while “Swine Fever” reminds that “Always someone on the TV screen/ Trying to sell you something you don’t want or need” before concluding that “ What is the point of selling your soul/ When there’s nothing to buy/ And nowhere to go.”

However, woven through these are moments where it might well be Johnson singing about himself as he always might have done, hiding first-person experiences in the second and third person. The subject of “Shrunken Man” who is “… just an imperfect man/ Trapped in an imperfect body,” or the narrator of the devastating “Soul Catcher” who asks himself “So what will I regret the most/ The things I do or the things I don’t?,” before uttering one of the most achingly intimate lines of Johnson’s catalog, “My life is halfway through and I still haven’t done/ What I’m here to do.”

These are the moments where Johnson’s art shines brightest, where he’s able to point directly, unflinchingly, at those moments of personal darkness in a way that makes them uniquely his, and yet recognizably ours as well. Who hasn’t felt, simultaneously, that their best days were behind them and yet their best work remained undone?

Musically, NakedSelf is a companion to Dusk, with spare guitar arrangements that gather layers to them for the choruses before shedding those in the return to the story-like versus. “The Whisperers” starts with a single strummed guitar, adding bass, then a second guitar and a gentle drum beat before Johnson’s gently whispered vocals introduce the world to us. More guitars arrive for the chorus and his voice lifts to a falsetto while reminding us “Don’t get sad/ When people that you trusted stab you in the back/ So you thought they were your friends?/ Now you know, now you know.” “Soul Catcher” follows the same folk-infused template, as do the other more intimate and personal explorations. Those songs with a more globally critical focus are noisier, with “Swine Fever” looping into a noisy guitar riff and thumping drums, Johnson’s voice treated to add layers of noise and tone to his icy anti-consumer commentary, while “Diesel Breeze” loops guitar fuzz, strummed chords and noises as Johnson’s intones “The train rises up out of the dark/ Above the boarded up boulevards/ And burnt out cars,” thematically a match for Infected’s “Heartland” but sounding like nothing else in his recent career. Finally, mixing up the heavy/soft template, “Voidy Numbness” and album closer “Salt Water” are both stadium-ready rockers, raging at the failure of the masculine in the face of a deep need for intimacy and emotion.

Upon release, NakedSelf received some of the best reviews of Johnson’s career but, after decades of trying to both satisfy the demands of the corporate music industry and remain faithful to his musical demands, coupled with the struggles surrounding the rejection of Gun Sluts and Nothing/Interscope’s mishandling of this album’s release, Johnson was done. The instruments went into storage and he effectively retired, emerging slowly over the next decade for a growing body of film score work, setting up both a record label and a small publishing house, releasing a stand-alone download-only single “Mrs Mac” in 2007 and slowly gathering strength and confidence to return fully with 2018’s Comeback Special Tour. There’s talk of a new album, a recent medical crisis that saw Johnson near death, and the reissue of See Without Being Seen, an album of noise low-fi demos made when he was only 16 and which he originally sold on cassette outside Cabaret Voltaire and Throbbing Gristle gigs. And now, while clearly battered by the machinery of the music industry, the spark that burns through all of Johnson’s work remains with us, as clearly articulated in NakedSelf as in any of The The’s albums and now as vital as it ever was.