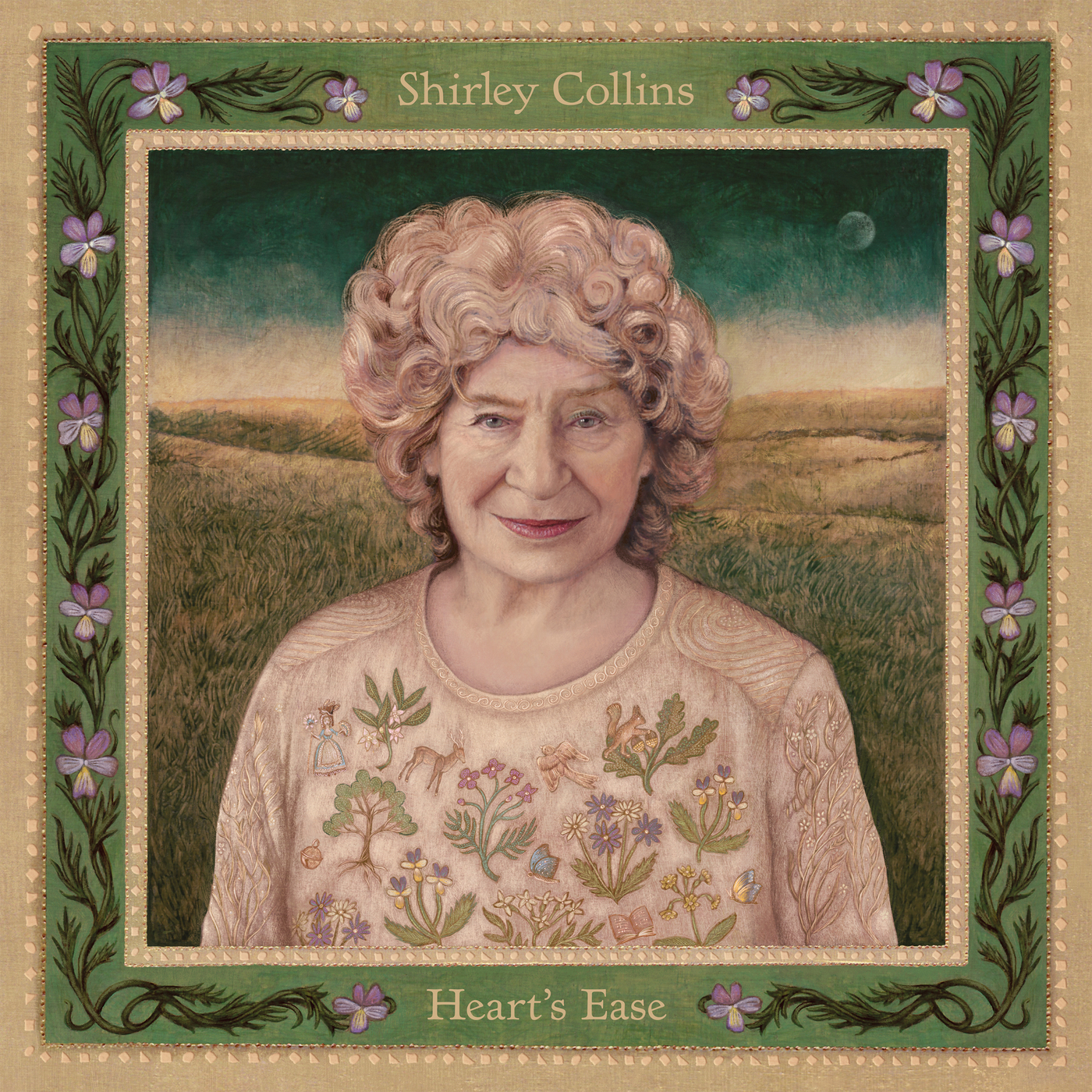 When Shirley Collins emerged from a nearly 40-year absence with 2016’s Lodestar, the onetime luminary of English folk had lost her youthful, soaring soprano in favor of a mid-range, half-spoken form of recitation. Her vocals betrayed the artist’s doubts about playing professionally after such a long furlough, though the album itself was a stunning achievement, and as celebrated in some circles at 2016’s other great artistic revival, the tragically thwarted comeback of David Bowie via Blackstar. Happily, Collins’ confidence appeared to soar in direct proportion to the adulation she received, lighting a fire in the octogenarian that saw her become an unexpectedly combative interview, a blend of set-in-her-ways elder and enduringly spry activist in her forthright opinions on folk becoming an aesthetic adornment over an expression of downtrodden spirit. Her bolstered self-belief can be found all over her latest record, Heart’s Ease, an album which builds on all the strengths of its predecessor and finds its singer in strong voice and stronger conviction.

The music of the album fits the Inside Llewyn Davis definition of folk as music “that was never new and never grows old.” There are traditionals here stretching back to the 17th century, and English ballads so old that Canada is still an exotic, unmapped frontier. On “Canadee-i-o,” for example, Collins sings the tale who sets off for the new world by sneaking aboard her lover’s ship, only to nearly get tossed in the ocean by enraged and superstitious sailors. Underneath the whimsical guitars and Collins’s hypnotic Sussex accent is wry commentary on English power structures, as the captain saves the woman only to make her his own bride, pulling rank on his subordinate’s love affair. Elsewhere, Collins changes up the lyrics to “The Merry Golden Tree,” an old sailor’s song filled with patriotism, to make the British navy itself the enemy, turning a jingoistic ode to imperialism on its head.

Such political observations are subtly shaded, and for the most part, Heart’s Ease is a reminder that folk, like blues, is as much an expression of the intimate, and even joyous, as it is a catalog of oppression and pain. “Rolling in the Dew” is a ribald celebration of the oldest way for adults to pass the time that traipses around double entendres before returning to the all-but-outright-lascivious refrain “Rolling in the dew makes the milkmaids fair.” “Wondrous Love,” on the other hand, captures the ominous drone of liturgical music in its almost desperate and fearful invocation of faith. Elsewhere, John Watcham’s bouncy concertina leads the Morris dance standard “Orange in Bloom” in the album’s lone instrumental, a tribute to dance traditions that speak to the ways that workers and farmers could unwind for generations.

Folk music is, of course, an art of interpretation, and Collins revisits material she recorded in her youth. She was in her 20s when she first played “Barbara Allen,” a Scottish traditional about a young woman who refuses the proposal of a dying would-be lover, only to pass away from regret and grief when he succumbs to his illness. Oddly, the earlier version, sung in the full, strong alto of Collins’s youth, sounds the frailer of the two, taking on a quivering warble as if horrified to have just seen this tragedy play out. Here, though, time has taken the edge off of that shock, leaving only a resigned empathy for lives wasted. There’s a matter-of-fact tone to this rendition that both mutes its immediate sense of grief and deepens it with the morose defeat of memory.

Intriguingly, Collins also mines her own family’s writing for non-standard material. “Locked in Ice,” written by her late nephew, Buz, is a quietly hellish account of a trading expedition off the northern coast of Canada that takes the point of view of the cargo ship that becomes encased in ice. With brittle guitar accompaniment, Collins captures the detached, inhuman agony of a doomed boat as she intones “The black ice, it closed in on me/ It was a fearful guarantee that I’d be run to the ground.” Closer “Crowlink” is a newly commissioned piece drien by Ossian Brown’s eerie hurdy-gurdy drones and a soundscape of noise and field recordings by Matthew Shaw. A tribute to the seaside cliff of South Downs where Collins spends her time, the song is just as much a disquieting reflection on the fading of life, using new techniques to capture folk’s longstanding interest in the dispassion of time’s passage and the ephemera of life.

Yet the biggest shock of the album involves Collins taking two compositions from her first husband, Austin John Marshall, who helped launch her career and push it into arty, ambitious directions but whose cruel and mocking dissolution of their relationship so broke the singer that he contributed heavily to her early retirement. Time cannot be said to have healed all wounds, but Collins reserves some of the album’s finest moments for interpretations of his work. “Whitsun Dance,” previously recorded by Collins in 1969, is a Vietnam-era anti-war tune steeped in conflicts far more ancient, rooted in the scarred aftermath of World War I and the efforts of those left alive to rebuild some sense of normalcy in a world revealed to be mad.

More beautiful still is “Sweet Greens and Blues,” a rearrangement of an unreleased demo Marshall wrote in 1965 about their financial and emotional struggles as new parents. The new arrangement is lush and a quiet showcase for the guitarists assembled for these sessions, all overlapping, sun-kissed steel strings refracting sunlight. The lyrics are filled with willful and ironic denial of the couple’s hardships, and Collins, looking back through a fog of subsequent, traumatic memories, imbues lines like “We can live in the basement/ We won’t miss the views/ Just as long as we’re living in sweet greens and blues” with a bittersweet touch that is as nostalgic for those hard times as it is aware that the problems were just starting. In that moment, she makes a folk standard of her own life, filling it with the intensity of the memories that shaped it while leaving enough unsaid to beg for the interpretation of others.