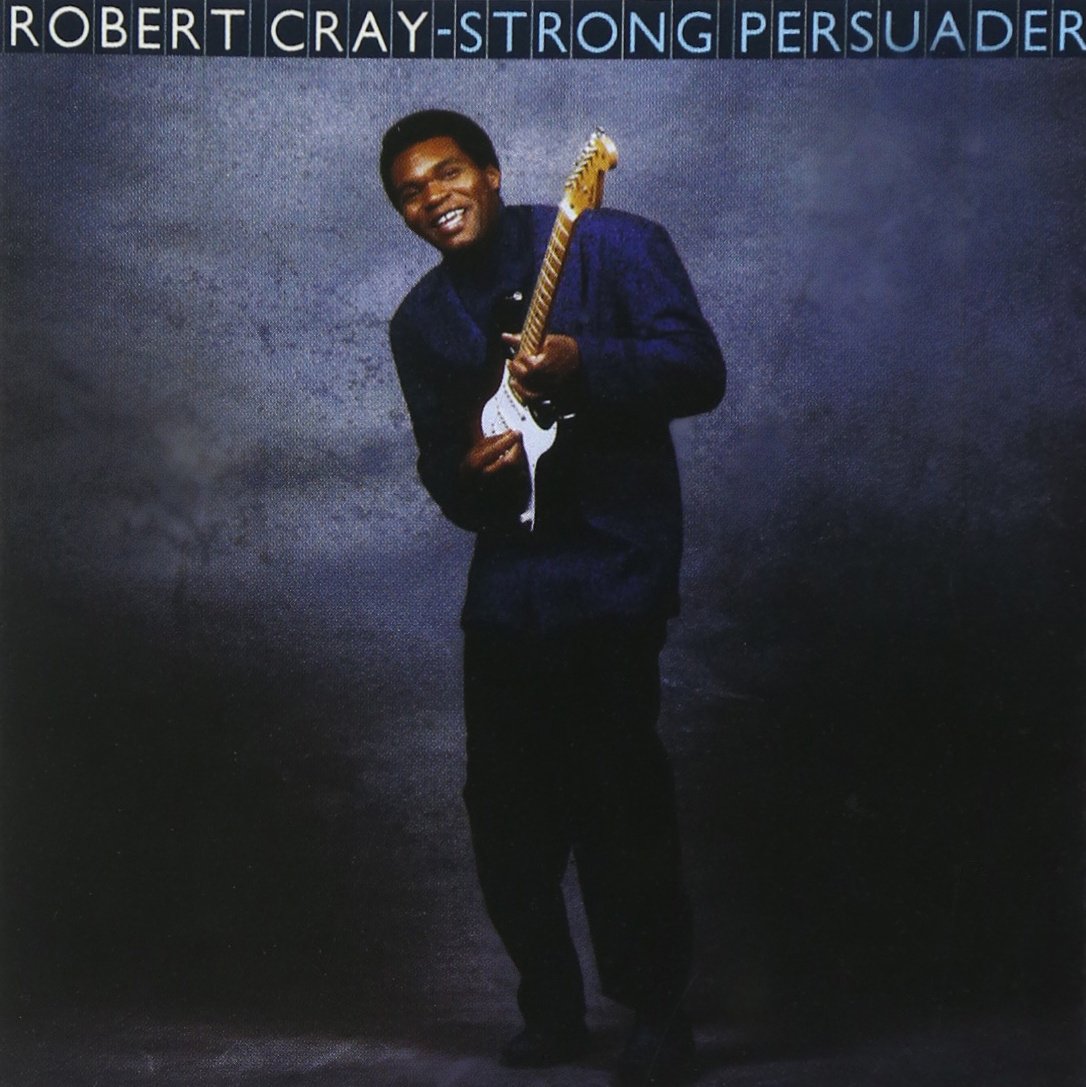 A friend looking to scratch a musical itch recently put out a call for pre-1980 electric blues. The presumed cut-off for the “real thing” is telling. Through the ‘70s, legends such as B.B. King and Muddy Waters still put out strong product, but the ‘80s seemed to provide a smoothing corrective to the shaggy “me decade.” So blues aficionados and curious crate diggers may not be that excited that copies of Robert Cray’s 1986 Strong Persuader are easy to find cheap. Cray’s critical and commercial breakthrough was highly acclaimed at the time—Christgau gave it an A+—but one would be forgiven for thinking it a bit, well, slick. But its catchiness and popcraft, seemingly a far cry from Robert Johnson’s “Crossroads,” may in its own way reflect a deal with the devil. You don’t have to listen hard to these ancient blues tropes to hear a soul tormented by Satan.

The Georgia-born Cray had a notable uncredited film debut; he was the bassist in the house band in the 1978 comedy smash Animal House. On his 1980 debut Who’s Been Talkin’?, “The Welfare (Turns its Back on You)” hit all its four-bar marks, with a piercing guitar solo and harmonica breaks filling a time-worn formula with journeyman competence. Yet something hit on Strong Persuader, and though at the time the sheen of its production values could seem more in tune with ‘80s excess than blues tradition, Cray’s songwriting and playing played a neat trick. Its stories are steeped in ancient and dangerous tropes, yet delivered with a commercial, accessible flair.

“Smoking Gun,” which Cray co-wrote with David Amy and Richard Cousins, quickly immerses the listener in that alchemy of catchy guitar pop and sexual jealousy, steeped in the promise of violence so often present in the blues (and, well, rock). The rhythm guitar could be part of any blues-rock chime of the decade, but its trebly pulse plays right into the opening line: “I get a constant busy signal/ When I call you on the phone.” The ominous rhythm guitar is the busy signal, and after Cray sets up the story with efficiency, his solos are perfect metaphors for his protagonist’s brooding irrationality. Like a hard-boiled crime writer, he gets into the evil heart of his character and writes (and sings) it with such effortlessness that the listener easily hums along to the bloody scene.

Backed by soulful horn charts, Cray’s smooth tenor doesn’t have anywhere near the menace of a Howlin’ Wolf, but its very youthfulness makes it chilling. In “I Guess I Showed Her,” Cray’s thwarted young lover checks into a hotel room after walking out on his woman; the transgression that led to this impasse was that he “saw her having lunch with some new guy.” Cray’s guitar solo is almost playful, and it’s a humorous setup for the tragedy of the album’s centerpiece.

Cray turns down his vocals for a near-spoken-word monologue on “Right Next Door (Because of Me),” a wonderfully modulated track that confirms his gift as an actor. For the most part, he’s giving a dramatic reading, a play-by-play of the domestic quarrel happening next door. He vividly sets up the stage: “Their angry words sound clear through these thin walls.” He’s conflicted about his prowess, proud that “I’m such a strong persuader,” yet guilty: “She was just another notch on my guitar.” But: “In the silence I can hear their breaking hearts.” He knows he’s got it, and he can’t help himself, but it kind of kills him. The most pained outburst in a mostly restrained performance comes after a late chorus of “It’s because of me,” when he adds the self-rebuking, “Young Bob!” That’s the key to the album, and to the stories Cray—and the blues—tells. He’s at the peak of his physical power, with his whole life ahead of him, but what the music and the demons demand is mistreatment and pain.

Despite its radio-friendly hooks (“Smoking Gun” hit #22 on the Billboard Hot 100), this isn’t soul music as celebration but the blues as fatalism, the genre’s signature torment dressed up in skinny ties and ‘80s production values. Strong Persuader sounds like a blues man’s braggadocio, but again and again on this album, it plays as much like a curse. Sure, you can stream it anywhere, but you can also pick it up for peanuts. Meditate on the streamlined cover art wearing down at the edges, listen for the crackle cutting through what was once-state-of-the art sonics, and ponder the ravages of time and sin.