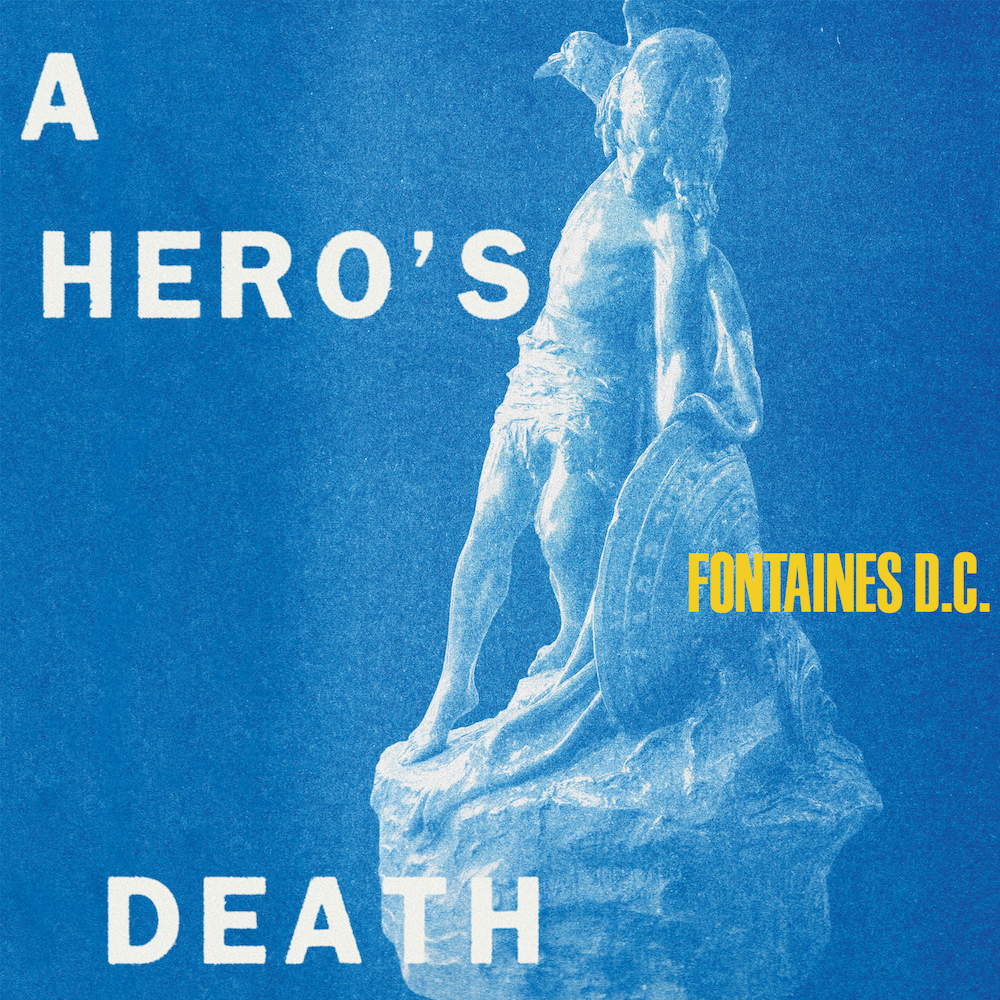 Though Dublin neo-post-punkers Fontaines D.C. had been gaining steam for two years before their 2019 debut, Dogrel still hit the indie scene like a bomb. While it was steeped in the jagged, angular language of post-punk, the record’s blend of aggression and stylistic diversity regularly recalled London Calling, and it received the rapturous reviews to match. A Hero’s Death takes a sharp turn from its predecessor, sinking much more into the revivalist post-punk sound with a spacious, ominous soundscape from producer Dan Carey that would make Martin Hannett proud. Conor Deegan’s bass and Tom Coll’s drums drive much of the record, with the snarling guitars of Carlos O’Connell and Conor Curley retreating more into atmospherics, often providing ambient flavoring around Deegan’s lines.

This quieter, spookier Fontaines D.C. can be heard immediately in “I Don’t Belong,” a loping anti-anthem that rejects any attempt to co-opt the band into anyone’s movement. A brittle guitar riff undergirds a mid-tempo shuffle as Deegan’s climbing bassline rings out in the center of the mix. Singer Grian Chatten flits between several viewpoints of figures who cast off others’ expectations. First he sits among wannabe revolutions and mocks them for “Just dying for a cause, cause, cause” before taking on the guise of a decorated soldier who “Threw himself before a bullet” but also “threw the medal to the dirt” to prevent his trauma from being exploited for propaganda. Such attitudes are an extension of the viewpoint the band expressed on their debut, of being far more concerned with the immediate concerns of working-class life and the difficulties of seeing far-ranging change when you’re too preoccupied with not getting priced out of existence.

A sardonic anxiety runs through the album. “Televised Mind” worries about the impact of the very culture to which the band contributes, saying of squawking talking heads “They’re all gulls in the sky/They all mimic love’s cry/And I wish I could die/Me or them.” “You Said” brings the nervous observations closer to home, capturing the breakneck speed of modern life where you “don’t get time to think now” and human beings are reduced to robots “operating faster/operating Faster. On the sarcastically bouncy, ‘90s punk of the title track, Chatten keeps repeating “Life ain’t always empty” as if trying to convince himself, and the inclusion of parodic Beach Boys harmonies onlys adds to the sense that the band is knowingly selling you a false bill of goods with a spoonful of sugar.

Though A Hero’s Death differs significantly in sound from its predecessor, it is the more aesthetically unified album. The separation of the guitars to leave the center space to the rhythm section, combined with the pristine hollowness of the surrounding negative space, so powerfully recalls albums from the turn of the century that it might be fair to call this post-punk-revival revival. But the riffs remain creative and more stylistically curious than they might seem at first. Where, say, “A Lucid Dream” is elemental post-punk, all sharp snare and cymbals and white-funk bass, its flourishes of noise anticipate something like “Living in America,” where the guitars collapse into a droning buzz against a cyberpunk landscape. “I Was Born,” the album’s most anthemic denial of conformity, brings back the ‘60s jangle that pervaded Dogrel.

The biggest shifts tend to come from the surprising number of ballads. “Love Is the Main Thing” has a chugging beat and oscillating riff too driving to really convey sentimentality, but the yearning in Chatten’s deadpan vocals as he intones lines like “Tired of embracing/Using and wasting” sets up the more somber numbers toward the end of the album. “Oh Such a Spring” is a fragile bit of neo-folk, a wistful portrait of silently endured misery that offers a clear reminder this band formed in part while bonding over a love of Joyce and his ability to convey the sights, sounds and smells of his surroundings in prose. Closing track “No” is the loveliest song the band have crafted to date, an empathetic address of the wars that rage within us all to face fears and carry on. “When you go down to that place/It makes a monster of your face,” Chatten sings, and he sympathizes with the way that such internal fights can defy our ability to articulate them. “Even when you don’t know/Even when you don’t/You feel,” he intones, setting aside the album’s wit and distancing irony to connect. Less of an immediate sensation as the group’s debut, A Hero’s Death nonetheless cements the group as one of the most exciting rock bands to emerge in an age.