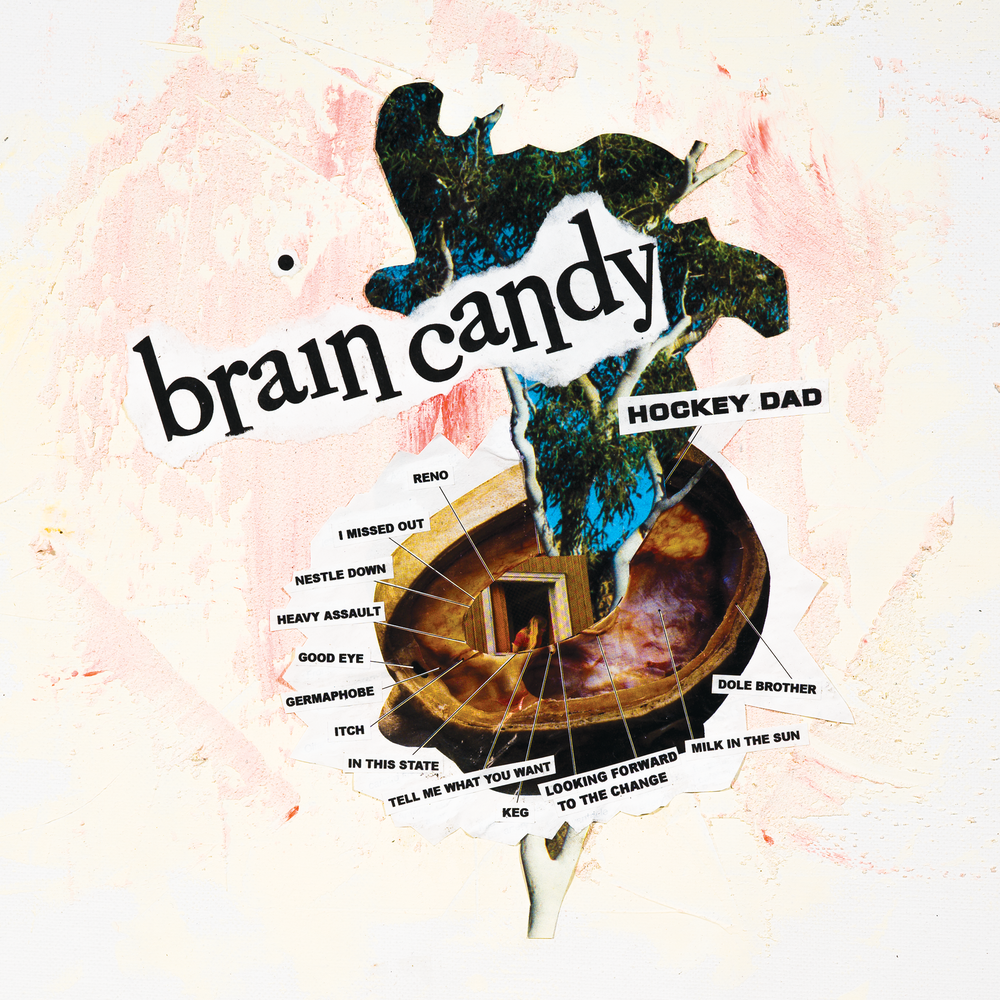 Hockey Dad’s third album Brain Candy marks a transition for the duo. Zach Stephenson (guitar/vocals) and Billy Fleming (drums) have played together since childhood, and their first two records brought a little surf into the garage for some full-speed ahead indie rock. The pair mixed sugary tunes with increasing frustration, and 2018’s Blend Inn could have found a hope in North Carolina’s ’90s scene. Now they take a step forward, or if not forward, at least in maturation. They’ve improved as musicians and they’ve grown up a little, and they know enough to not wander too far.

Much of the album still relies on a being a bit frenetic, the punkish roots still showing. Hockey Dad open the record with “In This State,” making sure the fuzzy pop stays center and highlights the sort of energy the album contains. “Germophobe” struggles a little bit. Since its mid-tempo casualness never gives the song the energy to explode, it comes across like the sort of tune these guys could perform in their sleep and maybe are (the ill-timed lyrics don’t help). The song sounds more meditative than it is, and it would benefit from getting a little jolt. Across the album, when the band sticks to their standard sound, it still delivers as long as it keeps the pace up.

Fortunately, they frequently push into aesthetic tangents, whether through their overdubs or by changing tempo and mood without sacrificing coherence. “Itch” looks back to the ’90s, but to UK rock instead of the US indie scene. The song uses a steady guitar part to slowly develop its central conceit. Stephenson turns the idea of an “itch” from a problem into an invitation for a partner to come further in. The song, a descendant of early Radiohead, sounds conflicted and worried while ultimately giving into some risk for necessary connection.

That sort of complexity suits the band well. On Brain Candy they suffer less from youthful angst and anger than from concern. The album, even in its poppy moments, does less to rage against the system than to make sense of immediate context. “Keg” puts the band back in an easygoing mood, but more successfully this time. The track oscillates between a self-focused despair and a look around the bar. When Stephenson uses his “last 20” to drink away his problems, we can’t support him, but he draws into the sense that he really does “just need some time.” The singer’s confusion brings solid ambiguity to the song, capturing the drag of an unhappily tipsy early evening.

Hockey Dad make their best Brain Candy music when they maintain a level of complexity. They can still pummel ahead when they want to, and that approach serves them well. The gap they’ve discovered is one that allows in the more straightforward songs performed under the guise of reflectiveness. As they start to build their art into something more formidable, they’ll know how to blend that youthful force with their new concerns. This album does it pretty well, but the band can still grow into their new mindset.