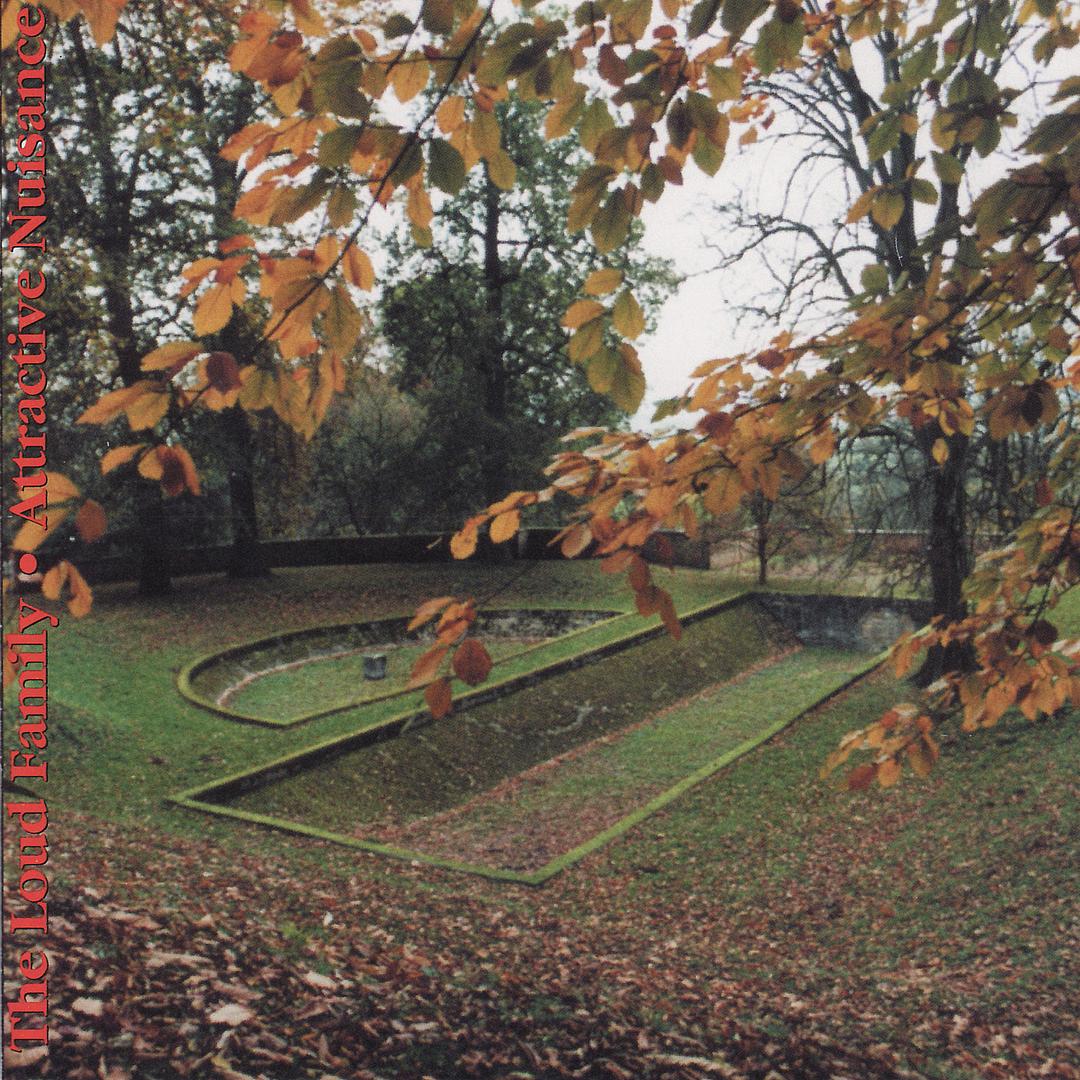 After nearly a decade heading Game Theory with what our streaming services label as jangle- or power-pop, and after spending the next 10 years taking the Loud Family into a more experimental direction, Scott Miller entered 2000—what one song predicts as our “Backward Century”—with, for the first time in a while, a consistent line-up. Despite frequent roster changes, Miller and his creative allies crafted an appealing sound, and his singer-songwriter quirks—a distinctive voice, lyrics elusive, allusive and effusive, and a dizzying range of pop culture and literary asides—meant that whatever form ambitions took in the studio, these discs clicked. By Attractive Nuisance, the fifth Loud Family LP, noise subsides into nuance.

Three of this Northern California-based ensemble stuck with Scott Miller for their latest recording. Drummer Gil Ray went way back with Miller, Kenny Kessel kept a bass plucked for a steady stint and, notably on Attractive Nuisance, on her second album with the band, Alison Faith Levy’s layered keyboards invited the Loud Family into a soulful, early ‘70s vibe, given her earthier delivery. Their touring honed their senses for what made a clever rock song gel. Even though Miller and band as on the previous Days for Days took charge of the tech, by now the production lessons Miller had learned next to Mitch Easter since the mid-1980s paid off well.

Miller had weathered tough times, and while a short review will not get into these details, one reason Miller no longer worked with Easter remains relevant behind the scenes, given the difficulties Miller faced emotionally, and the toll showed in trying to find success beyond a their “true gamesters” circle of followers. His lyrics hinted at shadows within. However, the Family’s only proper 21st-century album downplays their quirkier side in fiddling with arrangements. Not that they had tamed their talent, but they focused on 12 relatively more accessible, tauter tunes.

Parsing out their credits, a pattern emerges. Miller divvied up cowriting with Kessel and Ray. Only four songs lacked a partner or two in their construction. Out of his “solo” compositions, “720 Times Happier Than the Unjust Man” (look up that Plato reference) and the poignant “One Will Be the Highway” (about U.S. Route 1, its sunny but here somber seaside San Francisco stretch) stand out for their intelligence and their passion. By middle age, Miller had mastered this delicate balance of brains and heart.

“Nice When I Want Something” recalls his difficult years post-Easter, when Interbabe Concern churned with tetchy edits, muttered rants and careening dynamics. “Backward Century” shares this tension. So it’s a relief when tunes where Miller opens up to his friends temper the troubled tones.

“Soul D.C.” starts with a typically insistent groove, and packs menace under Levy’s creaky echoes, Kessel’s thumping riff and Ray’s steady backing. It takes—shades of, say, the Cure’s Disintegration—a while for Miller to sidle in with his whispers turned to self-incrimination. His bent remains for thrown-off asides, deprecating barbs aimed at his present self at least as much as past lovers, as does his penchant for ear-worms that keep his ambles sprightly.

He dives into the depths on the suitably titled “Blackness, Blackness,” but the distortion and pedals of his ever-restless guitar wryly comment on the lovelorn lyrics and self-conscious despair. The peppy “Save Your Money” swaggers about and, like the road-tested tougher feel of album number two, The Tape of Only Linda, it benefits from eccentricity channeled into a few minutes. Easter’s Easter eggs pepper Miller’s inventions, as they do many of Game Theory and the Family’s albums. Attractive Nuisance nods to not only a memorable legal term, but the fate of T.S. Eliot’s wife, in a pastoral garden’s cover photo. If trains of these thoughts intrigue rather than irritate, you’re likely to welcome visits from the Loud Family itself, whose very name—well, you get the drift of Miller’s busy, buzzing mindset.

In a smart move, Miller twice welcomes Levy to step up to the mike. Game Theory in its penultimate phase benefited from an airier lilt by singer-guitarist Donnette Thayer; similarly, Levy’s pert backing and smoky vocals on “Years of Wrong Impressions” and her slyly extended metaphor (albeit pre-Trump years) of “The Apprentice”—certainly the sultriest this Family got—tempt listeners to imagine how Miller and company’s encyclopedic knowledge of music from their LP shelves might have widened their audience beyond fading “college rock” frequencies.

Some of those songs proved the Family’s best, as nestled here. True, even fans may concur that Attractive Nuisance meanders along a twisty trail that the Loud Family left, as in “No One’s Watching My Limo Ride” when it suddenly halts (as had Roxy Music’s “Mother of Pearl”) and saunters instead of sneers. Its catchy propulsion terminated, teased back and tossed aside may express this band’s weary attempts to break through the curse of “critical favorite” and cult following, as Miller’s skill set never gained a wider hearing. Similarly, that ticked-off “Controlled Burn” matches its moniker, as if by now, still on a poorly distributed small label, Miller and Family finally feel fed up. They did not dissolve due to animosity, but rather from the pressures of trying to pursue their muse amidst families, distances and dismissal by a fickle market which by the end of the last century had tired of indie rock’s unsung geniuses: “I don’t know what the radio wants when the radio taunts.” So goes the album’s finale, “Motion of Ariel.” Listen, lament and learn.