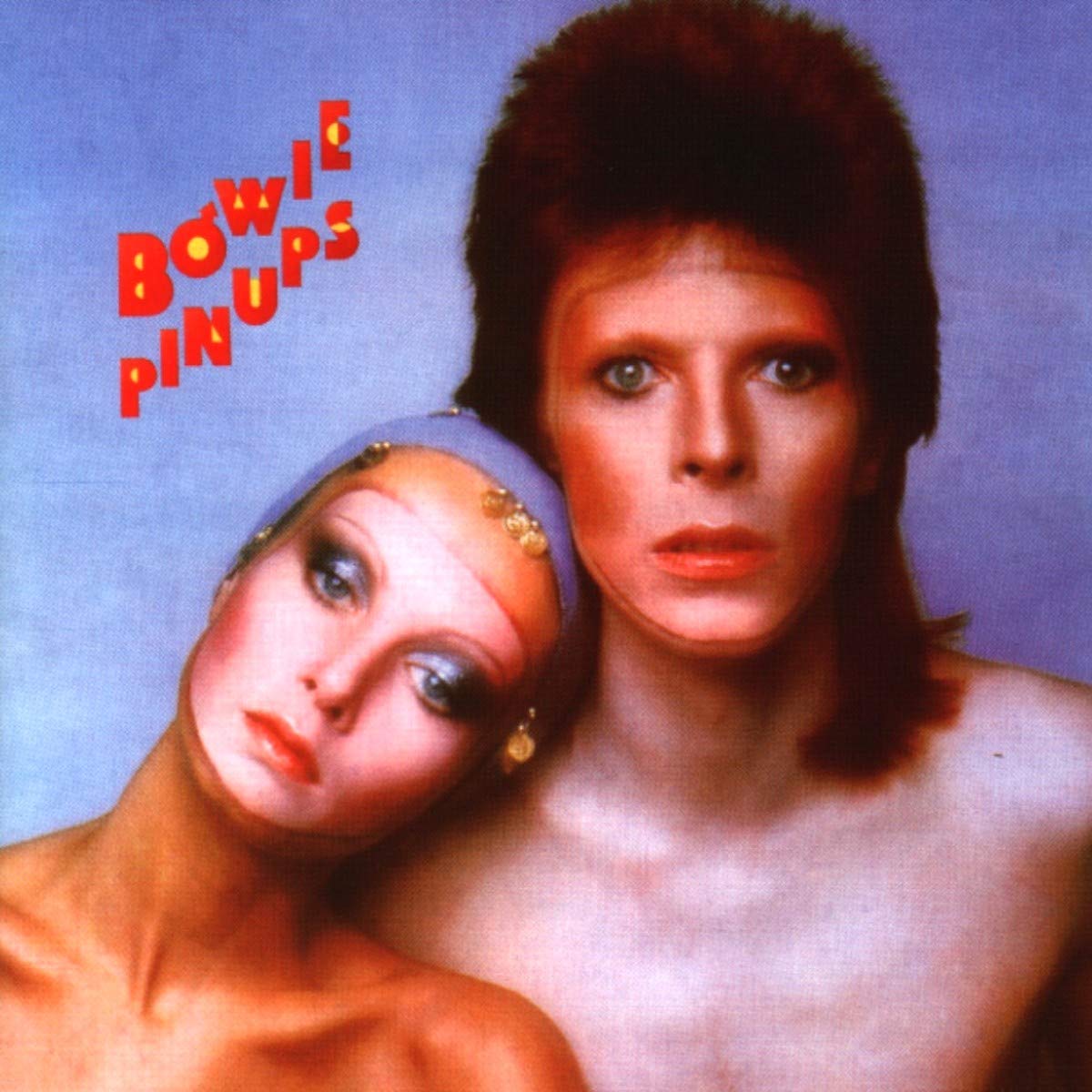 It’s often one’s favorite works of art that are the most difficult to write about, and the same could be said for cover songs. David Bowie’s seventh studio album, Pin Ups, the planning for which began immediately after the unceremonious unraveling of The Spiders from Mars, is composed mostly of rock songs from the mod era of ’60s Britain. They also happen to be songs that were close to Bowie’s heart. As he himself said: “These are all songs which really meant a lot to me then—they’re all very dear to me. These are all bands which I used to go and hear play down The Marquee between 1964 and 1967. Each one meant something to me at the time. It’s my London of the time.”

As such, Pin Ups sounds unsurprisingly less like a proper Bowie album than a mixtape, a time capsule, a piece of history, both personal and cultural: it gives us a reverential portrait of a specific place and time as well as a snapshot of some of Bowie’s formative influences.

As Bowie said, these songs were important to him at an impressionable age, so it may come as no surprise that they are for the most part faithful covers. Although not surprising, this decision was particularly disappointing for many listeners given its place in Bowie’s career. Having just completed an incredible run of sparkling and original displays of glam-rock excess—The Man Who Sold the World, Hunky Dory, Ziggy Stardust and Aladdin Sane—Bowie came out with a covers album that at times, ironically, suffers from a lack of innovation. Given how uncanny and strange Syd Barrett’s original “See Emily Play” was, you’d think it would have given Bowie license to do something wild with it, to put his own spin on it, and yet Bowie’s largely faithful rendition is a missed opportunity. Similarly, Bowie’s covers of bands like the Who and the Yardbirds are great, but largely due to the fact that the Who and the Yardbirds are great.

Another issue of contention with regard to Pin Ups, as Rolling Stone writer Greg Shaw wrote in his 1973 review, is the production. One of the few things Bowie and producer Ken Scott do change on some of these songs is where Bowie’s voice sits in the mix. Whereas many of the original tracks by the Who, the Pretty Things and the Yardbirds featured vocals that were lower in the mix, making for a muddier sound, the “rough edge,” as Shaw puts it, is lost in many of Bowie’s versions, where the music is mixed down to show off Bowie’s vocals. And it’s true that the songs at times lose some of the shaggy punchiness of their antecedents as a result.

However, although Shaw calls this the record’s “true failure,” some of Pin Ups greatest moments are in part a result of Bowie’s vocal performances. Take Bowie’s version of Bert Berns’ “Here Comes the Night,” as recorded by North Ireland’s Van Morrison-fronted Them, incidentally one of two non-English groups featured on the LP. Bowie’s version is a lumbering beast, much heavier and much less cute than Them’s version, aided by the addition of the alto and tenor saxophones (played by Bowie), the heavier guitar tone and, of course, Bowie’s voice, which serves as an important anchor. Where Morrison lilts, Bowie goes for power ballad grandeur. The weight that Bowie’s vocal brings to the song makes it a true highlight.

Though we don’t see enough of what makes David Bowie unique in these covers—it’s hard to mess with your favorite songs—Pin Ups is more than a nostalgic curio. Although Bowie’s fidelity at times makes for a less exciting album, it makes for a more stable historical artifact, one that gives a portrait of Bowie’s beginnings while marking a turning point in his career.

Pin Ups marks a definitive line in the sand, one that separated Bowie from his past—not only from his earliest beginnings in the London scene that spawned many of these songs, as the frontperson for Davie Jones & the King Bees, but also his Ziggy Stardust alter ego. This final separation found its literal counterpart in the dissolution of the Spiders from Mars. At Bowie’s last show as Ziggy Stardust—at the Hammersmith Odeon in London—he informed the audience (and a couple of his bandmates) “this is the last show we’ll ever do.” The Spiders, understandably, started to fracture. Drummer Mick Woodmansey and bassist Trevor Bolder weren’t happy, and Bowie knew it. As Bowie later said, “They were so angry, I think, because I hadn’t really told them that I was splitting the band up.” As a defense, he offered: “But that’s what Ziggy did, so I had to do it too.” Days after his final show—and arguably his final, divisive act as Ziggy—Bowie stayed at the Hyde Park Hotel and began brainstorming with Mick Ronson on what would become Pin Ups.

Pin Ups, then, stands not only as a symbol for the retirement of Ziggy Stardust (and the Spiders from Mars) but also as an homage—and, perhaps, a farewell—to the inspirations and ambitions of Bowie’s youth. Speaking to his time as frontperson for the Manish Boys, the band he joined after leaving Davie Jones & the King Bees, Bowie said, “I used to dream of being their Mick Jagger.” Bowie in the mid-‘60s had clearly dreamed of being a rock star, and he succeeded, but in the end, he could never be a Mick Jagger—he was something else entirely, though no less important. The closest he came to the classic rock star figure was Ziggy Stardust, and even then, he was more like a larger-than-life caricature of rock stardom, writing songs with knowing titles like “Rock ‘n’ Roll Suicide” and “Starman.” He was certainly onto something though, and he could have continued—Ziggy Stardust, the Spiders from Mars, all of it—but instead he abandoned it to try something new. Before he could give Ziggy’s stardom a send-off, he had to pay tribute to the kid who had yearned for it. But once he’d done so, Bowie began the next act, as he so often did. This restlessness would become a central part of what made Bowie who he was and no one else.