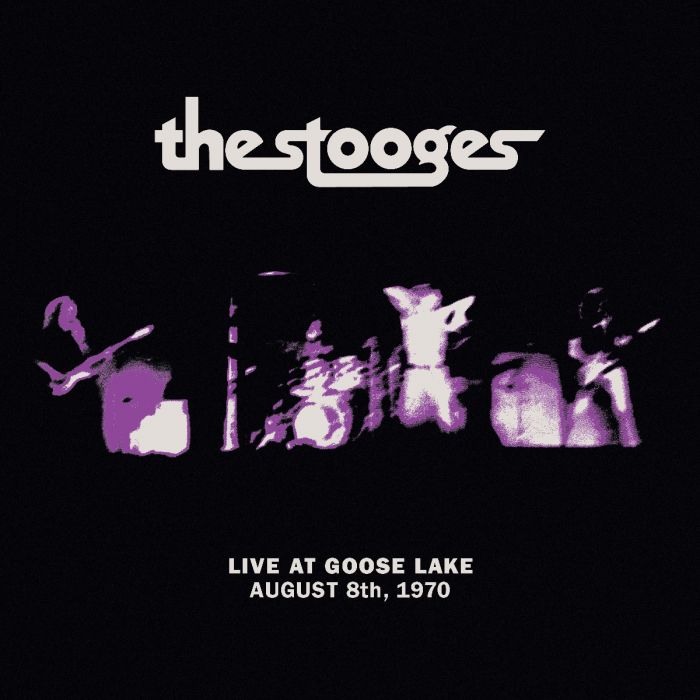 Like their contemporaries in pre-punk, antisocial noise The Velvet Underground, the Stooges are a band whose mythos is built, in part, on a legend for live performance that could never truly be captured, thanks to a combination of minimal label interest in documenting the groups and the limitations of speaker and live recording technology. What recordings that do exist, official and otherwise, are typically murky, the instruments bleeding into each other to create dim, tinny walls of fuzz. Live at Goose Lake: August 8th, 1970 represents a freshly unearthed soundboard recording of what would be the final performance of the group’s original lineup, a real piece of Stooges history.

Playing only a few weeks after the release of their sophomore album, Fun House, the band’s setlist simply consists of the record, played straight through with the only alteration being the swap of “Loose” and “Down on the Street” to match the group’s intended tracklist for the album proper. This does rob the release of some of the surprise that other Stooges live recordings contain, from their early experiments in avant-garde noise to those final run of post-Raw Power shows where the band was workshopping material for a fourth album that never arrived, songs that went out of their way to antagonize and bait audiences. This is perhaps the closest thing to a conservative Stooges performance, at least prior to their latter-day reformation as elder legends.

Even so, Fun House belongs on a very short list of the purest rock records ever conceived, which makes the prospect of any kind of run-through of its savage tunes a welcome one. “Loose” roars out of the gate and immediately one gets some of that muddiness that all Stooges live recordings have, but there is also a level of clarity all but entirely unheard in a document of one of their gigs. Scott Asheton’s drums, mixed right up front and center, turn the song’s machine gun snare into a screaming hangover, while brother Ron churns out the grinding riff behind Iggy’s moans and grunts. More energetic than the studio version, “Loose” immediately makes more sense as a grab-you-by-the-throat opener than “Down on the Street,” which the band audibly juts into like a bad gear shift as Iggy shifts from yelping madman to leering serial killer.

Notoriously, this gig, a spot in a rambunctious Michigan rock festival playing before 200,000 attendees smacked out of their minds on bad drugs, featured a disastrous performance from bassist Dave Alexander. Like the rest of the band, he got high before the show, but unlike the rest, he couldn’t hold his buzz and proceeded to play so erratically that Iggy Pop (no stranger to performing under the influence) fired him the second the show ended. That adds an additional layer of history to the proceedings of this rare occurrence of an official Stooges live release, though if one indulges the temptation to listen for Alexander’s flubs and dropouts, it often seems that the legend of his disastrous performance is overstated. It’s clear that his bass has been turned down in the mix, but you can still hear it gurgling throughout the first three tracks. Only when the group launches into proto-sludge metal heroin stupor “Dirt,” with its stark bass intro, does the problem first truly become clear. Even then, though, his sloppiness matches the track’s narcotic energy. The Stooges always were the raw dirtbag energy of spiraling addiction to the Velvets’ Burroughs-like dignity in ruin, and hearing Alexander start to slow and falter like his batteries were dying feels all too fitting.

The energy of these tracks is unmistakable, but anyone hoping for a glimpse at the chaotic lore of the band’s live act will find none of the caustic genius on free display on, say, Metallic K.O.. At least, that’s the case before the boys get around to Fun House’s second side. The Stooges never got the credit they deserved for the genuine intellectual undercurrents of their supposed braindead music; early gigs were as much art project as punk blueprint, with the band employing vacuum cleaners and other objects to add to their sludgy roar, and Pop’s songwriting, in its own way, was as direct a reflection of teen dissatisfaction and malaise as Brian Wilson’s. The closest the group ever came to capturing their capacity for genuine, form-pushing genius on wax is side B of Fun House, and one can only imagine being in the crowd of post-Altamont hippies as the subsequent wave of no future anti-love rock and pure free jazz hit them like a brick.

“1970” brings out saxophonist Steve Mackay, though he remains relatively restrained as the band tears through their anthem of willful denial of the collective bummer of the end of the ‘60s. But it’s on “Fun House,” as on the record, that things go completely mad. Beating the likes of Sonny Sharrock and Ornette Coleman to the free jazz fusion mark by a decade, the Stooges shriek, bleat and hiss through six-and-a-half minutes of rock and roll distilled to its purest essence as the music of rebellion. Only the skip and warp of a tape flip announces the bleed into closer “L.A. Blues,” which is simultaneously more unhinged and altogether more structured and elegant than its predecessor. Initially a pure wall of noise, the track slowly coalesces into competing sounds of feedback drone and oddly legato moans from Mackay’s sax as Pop helpfully contributes non-verbal screams and stretches of chanting that would verge on the spiritual were they not purely sentiments of the flesh. The undulating shape of the track, veering from disemboweled groans to driving riffs to noirish sax breaks that then divebomb back into a squall that would make John Zorn proud. If anyone in this crowd wasn’t having a bad trip before this band came on, they sure as hell were by the end. Even with the direct soundboard recording, Live at Goose Lake lacks the revelatory sonic upgrade to make this a crucial revision of the band’s legacy, and the album-oriented setlist makes for a fundamentally predictable experience. Nonetheless, the ferocity that pours off the band in the closing stretch manages, however fleetingly, to capture that mythology that has enshrined the band for decades.