Most American audience members likely found Betty Blue (1986) on a list of best sex scenes in film. And yes, the opening minutes of the movie still titillates. But there is more to Jean-Jacques Beineix’s third feature than just nudity. The director is more interested in amour fou, that crazy love that makes us step outside ourselves and do the unthinkable. Dismissed by Roger Ebert on its release as nothing more than a “skin flick,” the Criterion Collection has recently put out Beineix’s original three-hour version of the movie, adding back some quiet moments that give resonance to the sexy and violent images that may have felt like an overload in the film’s initial two-hour incarnation.

The story is told by Zorg (Jean-Hughes Anglade), a thirtysomething handyman who lives in a shack near the ocean, doing odd jobs at a complex of dilapidated bungalows. Enter the 19-year-old Betty (Béatrice Dalle). In a voiceover that sounds straight out of film noir, Zorg explains in the most ornate of terms: “We made love every night. The forecast was for storms.” We only see Betty through Zorg’s eyes and Beineix purposely denies her character any substance beyond what Zorg sees. She loves to fuck and carouse around the house in the nude. She discovers a trove of notebooks filled with Zorg’s fiction and proclaims him a genius. She is everything a man wants, right? Nope. Betty is also prone to fits of anger and if her buttons get pushed, watched out. It isn’t long before Betty has burned down Zorg’s house and the two must find a new place to live. 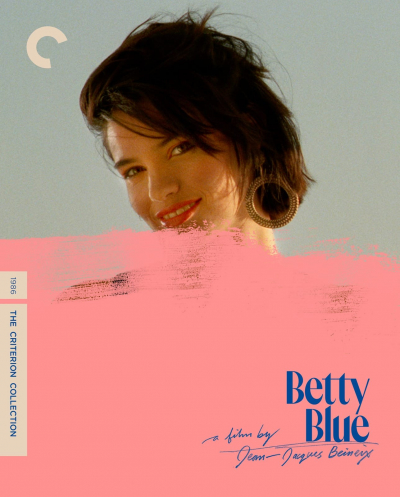 Despite numerous funny episodes throughout, a dark undercurrent runs beneath Betty Blue as the two protagonists become further entwined. Betty types up Zorg’s notebooks into one cohesive narrative and encourages him to shop it to publishers. He seems non-committal about the process but when the rejections begin to come in, it’s Betty who reacts violently. These flashes of anger, from cutting open a publisher’s face with a metal comb to stabbing an irate customer in the arm with a fork at the restaurant where Betty and Zorg both work, should be warning signs.

Critics have leveled accusations of misogyny at Beineix’s film and at first glance, it’s hard to refute those charges. Yet the film is filtered entirely through Zorg, who stifles and reduces Betty’s character. Yes, she is in the nude quite often, but so is Anglade, whose uncircumcised cock could have received credit for a supporting role. And in the initial copulation in the film’s opening moments, Beineix depicts Betty self-pleasuring during missionary-style intercourse, an image that would be a out of place in a film that does not care about its women characters.

Betty Blue does not feel like a celebration of love. Zorg clearly ignores Betty’s need for psychiatric care, even after she punches through a glass window and injures herself. When she complains of hearing voices in her head, he gaslights her into believing it’s the radio or the wind. Forced into this role by Zorg, and other men in society, it’s no wonder that Betty cracks up. In a moment of schadenfreude, Zorg learns that a publisher wants his book after Betty is restrained in the hospital. He no longer needs her and dispenses with Betty rather than allowing her to get the help that she needs. It’s a complicated end to a complicated film, one decidedly less sexy than its reputation allows us to believe.