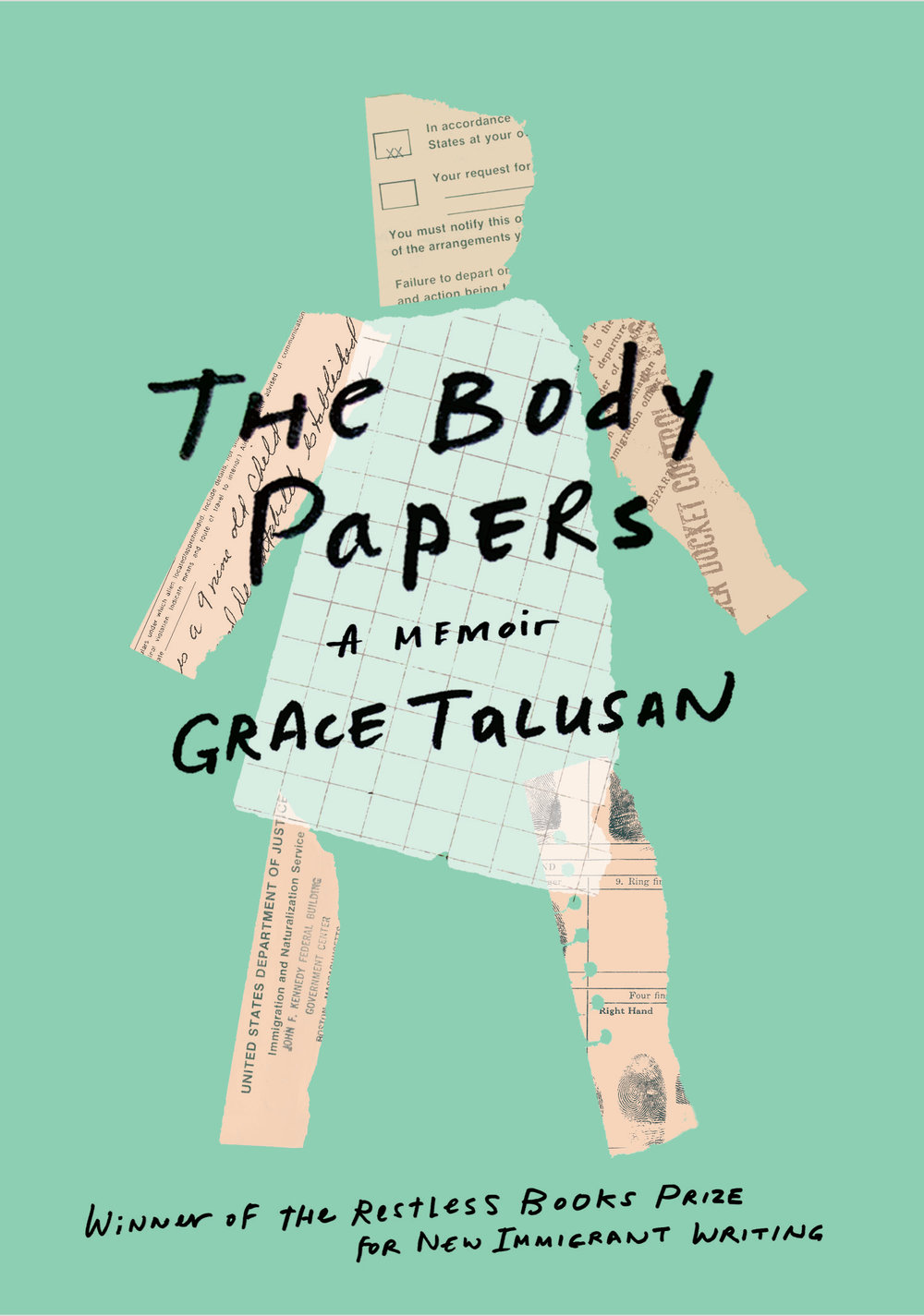 The body leaves a paper trail: birth certificates, driver licenses, photographs (at least, when photographs used to be printed). The immigrant body has more: visas, green cards, letters back home. In her debut memoir The Body Papers, Grace Talusan includes many facsimiles of these, documenting her life in government forms and pictures. Written as series of interlinked essays, The Body Papers is an expansive exploration of the body in motion—across borders and through trauma, disease and time.

The memoir begins with Talusan returning to the Philippines as an adult, a place that has long haunted her: “I’ve returned to the place where I was born because I’ve always had the feeling that I was missing something, like the insistent ache of a phantom limb.” An American who was born in the Philippines, Talusan encounters fewer barriers than she’s used to. “I had fewer immigration hurdles,” as someone born in the Philippines, she writes, compared to her American colleagues. At the same time, she knows that she is not like those who have lived in the Philippines their entire lives: “In Manila, people don’t know what to make of me,” she writes, “I appear to be Filipino, but the way I move and speak and stand blurs easy identification.”

The Manila she re-encounters is vibrant and dangerous. The heat and the traffic make sitting in a taxi without AC unbearable. And if there isn’t gridlock, there’s the risk of being run over. “About one pedestrian is killed every other day in the city,” she writes of the city’s cars heedless to traffic laws. To say nothing of the city’s disregard for the most vulnerable lives. Talusan writes of underpaid construction workers and stories of death on work sites. In another incident, she learns of a girl who lives in a cemetery, surviving “five years among headstones, eating the beautifully laid out oranges and pastries that mourners left as sustenance for their dead.”

Implied in this telling, of course, is that this is what Talusan escaped. Talusan left with her parents at the age of two. The original plan had been to return to the Philippines, but they find themselves staying. But as the memoir progresses, we see that an immigrant’s life in the United States has its hardships.

Most pressing is being undocumented, a term that Talusan acknowledges is full of irony: “There was plenty of documentation that we existed—my father had bought a house, started his own business, and paid taxes.” Though she did not know it as a child, Talusan’s family, excluding her American-born siblings, was on the verge of deportation. Still, being undocumented meant carrying that status with shame and as a teenager, she hid her temporary resident alien card behind her driver’s license: “I was mortified by it and didn’t tell my friends that I was a green-card holder. I was afraid they would make fun of me for being an illegal alien.”

Add on top of this the experience of being Asian in America—being embarrassed about one’s food, longing to have “brown hair, hazel eyes, or blond hair, blue eyes…normal like my friends”—and sexual abuse by her grandfather, who she later learns was a serial abuser back in the Philippines, and we see Talusan’s American childhood is far from easy.

Yet though Talusan inhabits a life in the United States, there is always a string that ties her back to her place of birth. If it’s not the abuse that spans generations and countries, it’s the later health problems, passed down by genes, that leads her to a double mastectomy and oophorectomy. There’s the inevitable feeling here that one can’t truly escape one’s origins no matter how many oceans you cross.

Yet this is no self-pitying story. Talusan emerges as a survivor, but more than that, we come to see her as thoroughly empowered by being the author of her story. If anyone knows the power of a story, it’s Talusan. She notes how under the Marcos dictatorship, “a story could destroy you.” Later, trying to make sense of her sexual abuse, she finds herself putting together the facts of her grandfather’s life, trying to make it into a coherent narrative, to see what could have led him to become a monster. “Do my grandfather’s years as a colonial subject explain him?” she asks. “Perhaps his trauma, among other factors, created a desire to feel strong and he became addicted, getting his fix from dominating bodies less powerful than his.” Talusan knows, of course, that there are no certain answers, but the impulse to make a story to explain away a wrongdoing—and erase her pain—is there.

Stories can be used to hurt people and legitimize the reasons we are hurt. At the same time, stories can be proof one’s humanity and agency. The act of authorship can become a type of rectification. In The Body Papers, Talusan reclaims her story. It’s a confession without the shame, a documentary but with a documentarian that walks readers through her thought process throughout her life’s journey. Indeed, a strength of the memoir is seeing Talusan working through the actions of her past self—such as learning how to speak up against racism or the decision process behind the operations that would forever change her body. The ethos behind this book is to look at one’s past self clearly and honestly; one is always learning, Talusan seems to be saying. In that way, she also teaches readers a path towards their own growth and empowerment. The Body Papers is a gift and Talusan a generous writer.

The Night Tiger: by Yangsze Choo

This novel doesn’t know what it wants to be, and without commitment to a genre, it feels s…