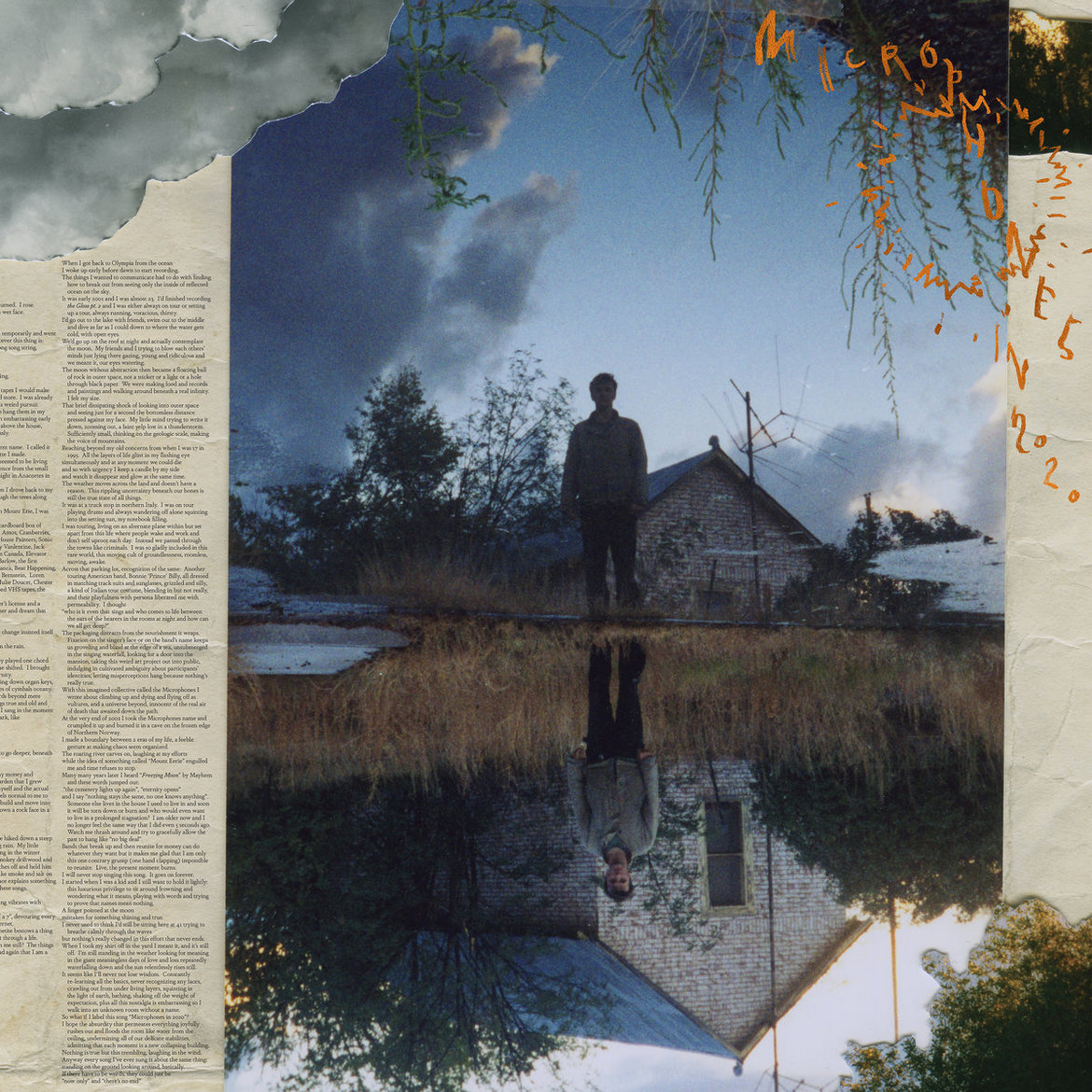 What does your name mean to you? How attached to it are you? Is it a key to your identity, one you’ve bonded with and grown to love as an extension of yourself, or just another data point that’s as useful as your birthdate or social security number? What about when you’re a musician: what does the name you record as mean to you, and how disposable is it? Now in 2020, Phil Elverum is here to help us ask that question – but we’ll get to that in a moment. First, a brief rundown to get you up to speed: from 1996 to 2003, he recorded four albums under the moniker “The Microphones,” the name forever etched on his most universally beloved work, 2001’s The Glow Pt. 2. Two years later, he’d release the final Microphones album, called Mount Eerie, which served as an inter-project baton pass.

From 2005’s “No Flashlight”: Songs of the Fulfilled Night until right now, the Mount Eerie name has been Elverum’s chosen moniker for his persistent quest to unpack the intricacies of his rich, and often painful, inner life. It’s the one used when he experimented with black metal (Wind’s Poem), unitized the atmosphere of an empty building in Portland’s Old Town district (White Stag), and to excruciatingly deconstruct the agony felt by his late wife’s passing (A Crow Looked At Me, arguably his greatest work). And while “The Microphones” have cropped up occasionally, mostly as extremely limited one-offs in Elverum’s hometown of Anacortes, WA, it hasn’t really changed the fact that it was him, performing his songs. The name doesn’t really matter, does it?

Apologies to anyone reading this who already knows about the twists and turns of the recording/personal life of Elverum. This admittedly-long history, as well as this series of seemingly-rhetorical questions about name and identity, are entirely necessary for your enjoyment of The Microphones in 2020, the newest “album” by, well, The Microphones. First, even calling it an “album” is somewhat deceptive: while it’s album-length, The Microphones in 2020 consists entirely of one, 45-minute song, called “The Microphones in 2020.” Does that make it a single? Who knows! What you call a thing doesn’t matter, right?

If the process of listening to The Microphones in 2020 is a grating and tiresome experience for you, don’t worry: that’s not exactly a bizarre response. It isn’t really meant to be purely likable easy listening. Hell, Elverum doesn’t start singing until nearly eight full minutes in, with those eight minutes consisting solely of two strummed chords. When he does finally start to sing, he alternates between singing and sing-talking, his delivery of the lyrics when he does sing following the same patterns relentlessly. And, if you aren’t invested in Microphones, Mount Eerie, or Phil Elverum as a songwriter, the act of listening to him be so self-deprecating and self-aggrandizing can be frustrating, and frankly boring.

Hell, even if you’re a fan of Elverum, it can be a bit of a slog. “The Microphones in 2020” is just one very long, rambling story, after all. Elverum is sparing in his directness, so his story wanders through a lot of different landscapes and phases of life as he searches for what it means to give yourself a name. He compares himself and the passage of time to rivers, waterfalls, and (of course) mountains, repeatedly reflecting on the natural “true state of all things” – the overarching one sets groundwork for the questions he’ll ask about time itself: “The true state of all things is a waterfall/ With no bottom crashing end/ And no ledge to plummet off/ Full of debris and flowers, never not falling.” Around every corner is new and breathtaking imagery and phrasing, with delicate phrases like “The beast of uninvited change/ Insisted itself in” and “My little mind trying to write it down, zooming out/ A faint yelp lost in a thunderstorm/ Sufficiently small, thinking on the geologic scale/ Making the voice of mountains.” If nothing else, the song/album is a remarkable display of Elverum’s ability to write on both a micro and massive scale, blending the two with shocking ease.

The easiest way to engage with The Microphones in 2020 is by reading the lyrics while listening. Unshockingly, the stories told here are long-winded, peppered with callbacks and references to his former self – this all serves as a launching point for self-mythologizing and autobiography, an artistic recap of where he’s been since he was a teenager. At one point, he straight-up sings the line “I checked themicrophones@hotmail(dot)com like once a week.” As he begins to examine his own mythology, the steadfast, two chord guitar strumming is joined by sparing distorted guitar noise, then drums and other drone-like elements, each its own nod to his own history as an artist. He namedrops everyone from Red House Painters and Eric’s Trip to Sinéad O’Connor and Mayhem, each a piece of his own creation myths. He covers entire creative periods, including the unquenchable thirst for creation that lead to The Glow Pt. 2, and what it means to be consumed by the desire to take your thoughts and make them coherent art.

Above all, The Microphones in 2020 is about the passage of time, and the way it acts both as an ever-flowing stream (or, as he already covered, a waterfall), but also as a flat circle. Moments like seeing Crouching Tiger, Hidden Dragon at a matinee in Aberdeen and seeing Stereolab play the same chord for 15 minutes in Bellingham are highly-significant moments that operate like boulders sticking out of the river, destined to change his course in massive ways. So, then, returning the same name he set ablaze in a cave in Norway (a piece of his mythology he covers here) is an attempt to fight against that current, though it’s unclear if that’s a good of bad thing – early on, he reflects on being “back where I was when I was 20/ Crashing through salal alone and mumbling/ One moment thinking I’m wise/ And in the next one I writhe/ Trying to re-remind myself of something learned then forgotten.”

The Microphones in 2020 never really arrives at a conclusion about whether or not it means something to go back to your old name or not. Late in the song he calls out the absurdity of the fact that he’s even trying it: “This luxurious privilege to sit around/ Frowning and wondering what it means/ Playing with words/ And trying to prove that names mean nothing.” He still tears himself apart trying to get there, though, to the point where he even tries to figure out the things that have occurred in his life that have made him predisposed to self-mythologize and ask these questions with his music.

One of the most fascinating things about The Microphones in 2020 is that it’s the direct result of just one show, played in July of 2019 with old friends of the Washington music scene – Karl Blau, Little Wings, Black Belt Eagle Scout. The act of writing “The Microphones” on a poster instead of “Mount Eerie” was a simple act, but like the performances and movies that shaped him, this small action shook loose something within Elverum, prompting a series of unanswerable questions about how identity works and who we see ourselves as inside. And then, somehow, he accomplishes all of this without seeming pompous, a feat more self-obsessed artists like Josh Tillman or Mark Kozelek could only dream of pulling off. The name Elverum puts on his album matters a lot more than he’d like to pretend, but at the same time, it doesn’t really matter what he calls it – only he could make an album like this, and have it turn out this compelling.