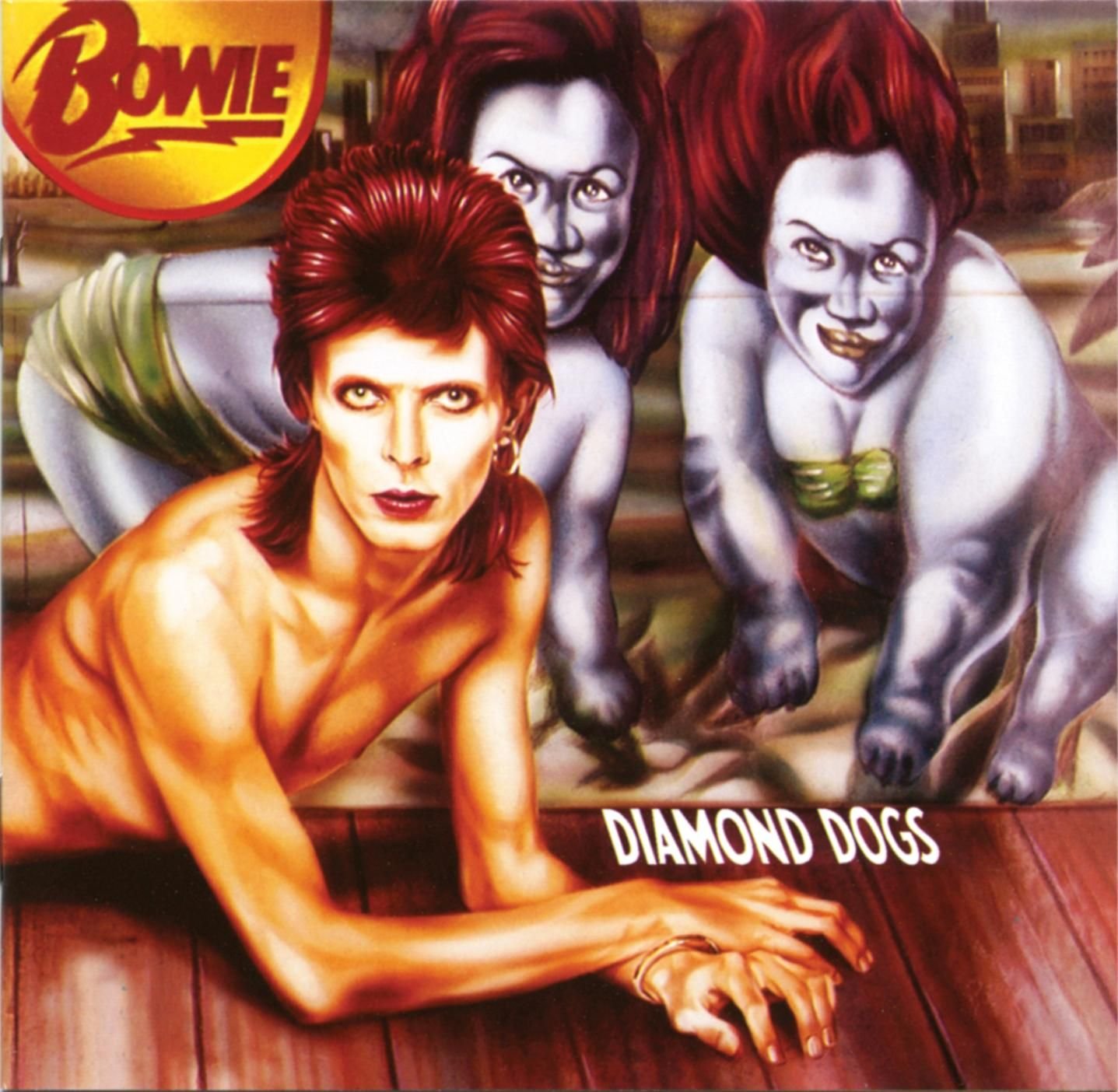 By the time Diamond Dogs was released in 1974, David Bowie had already forged a career that most musicians could only dream of. From his shaggy dog beginnings in the London mod scene of the mid-’60s, with explorations of folk and psychedelia, detours into crystalline pop and then his full-on apotheosis as the extraterrestrial rock star messiah Ziggy Stardust, Bowie had covered a huge amount of ground. With the tribute covers of 1973’s Pin Ups, he seemed to put a button on everything that had come before. For Bowie, reinvention was the only constant, and with Diamond Dogs, he seemed in some ways to be starting from scratch.

More than any of his seven previous albums, Diamond Dogs feels and sounds like a solo album. Recording without any of the musicians that had formed the Spiders from Mars, Bowie played most of the instruments himself, with the addition of Herbie Flowers on bass, Tony Newman and Aynsley Dunbar on drums and a handful of other guests. Moving away from the glam pop gems of the Ziggy years, the stylistic choices here range widely across a spectrum from synth freakout to hip-grinding blues to jazz balladry and disco posturing, with strange filigrees of sound and texture hanging off the edges of songs like stray threads.

Bowie originally intended to create a stage-and-screen musical production based on one of his favorite novels, George Orwell’s Nineteen Eighty-Four, but Orwell’s widow refused to grant the rights. Having already written half the songs, Bowie had to change course. It may have been a blessing, as it forced him to concoct original material that cohered with the Orwell-inspired pieces without hewing too closely to the source or being thematically limited. The result is a rough concept album that sets a much bleaker tone than the starry-eyed vision on The Rise and Fall of Ziggy Stardust and the Spiders from Mars. The opening track, “Future Legend,” hints at a narrative with a spoken-word piece set to creeping synths and razory guitars playing the melody of “Bewitched, Bothered and Bewildered.” An early lyric – “As the last few corpses lay rotting on the slimy thoroughfare” – strikes a sinister tone from the beginning, and although there isn’t enough narrative thread to call it a proper concept album beyond some mention of a character named Halloween Jack in the crumbling Hunger City, the dystopian mood persists across 11 songs. “This ain’t rock ‘n’ roll,” he hollers over canned applause at the opening of the title track. “This is genocide!”

That number could pass for a Rolling Stones tunes with its greasy blues rock vamp, twin rhythm guitars panned left and right like Keith Richards and company, cow bell clacking along in a hip-swinging beat and Bowie himself on sax channeling a Bobby Keys riff. But the album really shifts into a new gear with the “Sweet Thing” triptych, a gorgeous piano fantasia that veers into “Candidate” before looping back into a triumphant reprise. Here Bowie showcases his stylistic and vocal range, from gritty to lush and back. Like Leonard Cohen, Bowie’s evolution as a vocalist can be separated into two distinct voices: the high, nasal yelp of youth, and the resonant baritone of maturity. What’s remarkable about Bowie, however, is that both of these vocal identities coexist at once. Witness the astounding range on display in the opening verse of “Sweet Thing,” where he rumbles through one couplet before unleashing the pipes and jumping an octave on the very next line. That range extends to the mood of the music, as the torch song melody builds into a feedback-laden guitar outro that growls on for a full minute before chopping off, giving way to the stompy beat and string-bending blues vamp of the radio staple Rebel Rebel.

The Orwell-inspired material is stacked on side B, centered around the Shaft-esque disco groove of “1984.” Elements and themes from the novel pop up in the lyrics and extend the dystopian vibe (“We Are the Dead” and “Big Brother”), but it doesn’t add up to any more coherent message than the bleak vision of urban chaos and malevolent authority sketched out in “Future Legend.” That fuzzy focus, however, is a strength, pushing the listener to stitch a story together from the fragments Bowie offers in his collages of sound and cut-up lyrics that roam from the apocalyptic to the personal. The gender ambiguity in “Rebel Rebel” (“You’ve got your mother in a whirl/ She’s not sure if you’re a boy or a girl“) continues the strand of androgyny that he had cultivated in his public persona for years, a kind of sexual illegibility that was even more ahead of its time than the music. The album offers more of an attitude than a story, and it’s an attitude that still resonates powerfully today.

Sonically, Diamond Dogs is at once polished and ragged, with backmasked percussion, flanged guitars and phased loops juddering like a skipping record, all layered on top of shimmering melodies. It must have sounded futuristic at the time, and now sounds charmingly retro. These jagged edges would be polished off on Bowie’s successive albums, as he pivoted to the “plastic soul” sound that would earn him higher spots on Billboard charts with Tony Visconti’s production. But it’s the stylish thorniness of Diamond Dogs that presages the hard-edged pop theatrics of Dresden Dolls, Radiohead, Neko Case and Fiona Apple, among many others who drank from the well of Bowie. Diamond Dogs feels transitional, a snapshot of a lava lamp in motion between one form and another. He appears on the album cover as half-man, half-dog, a primordial hybrid that’s one part dream, one part nightmare. The album is a bridge connecting the cheekiness and flash of youth to the disillusion and complexity of growing older. It’s challenging, abrasive, ambiguous and smooth. It’s Bowie at his Bowiest.