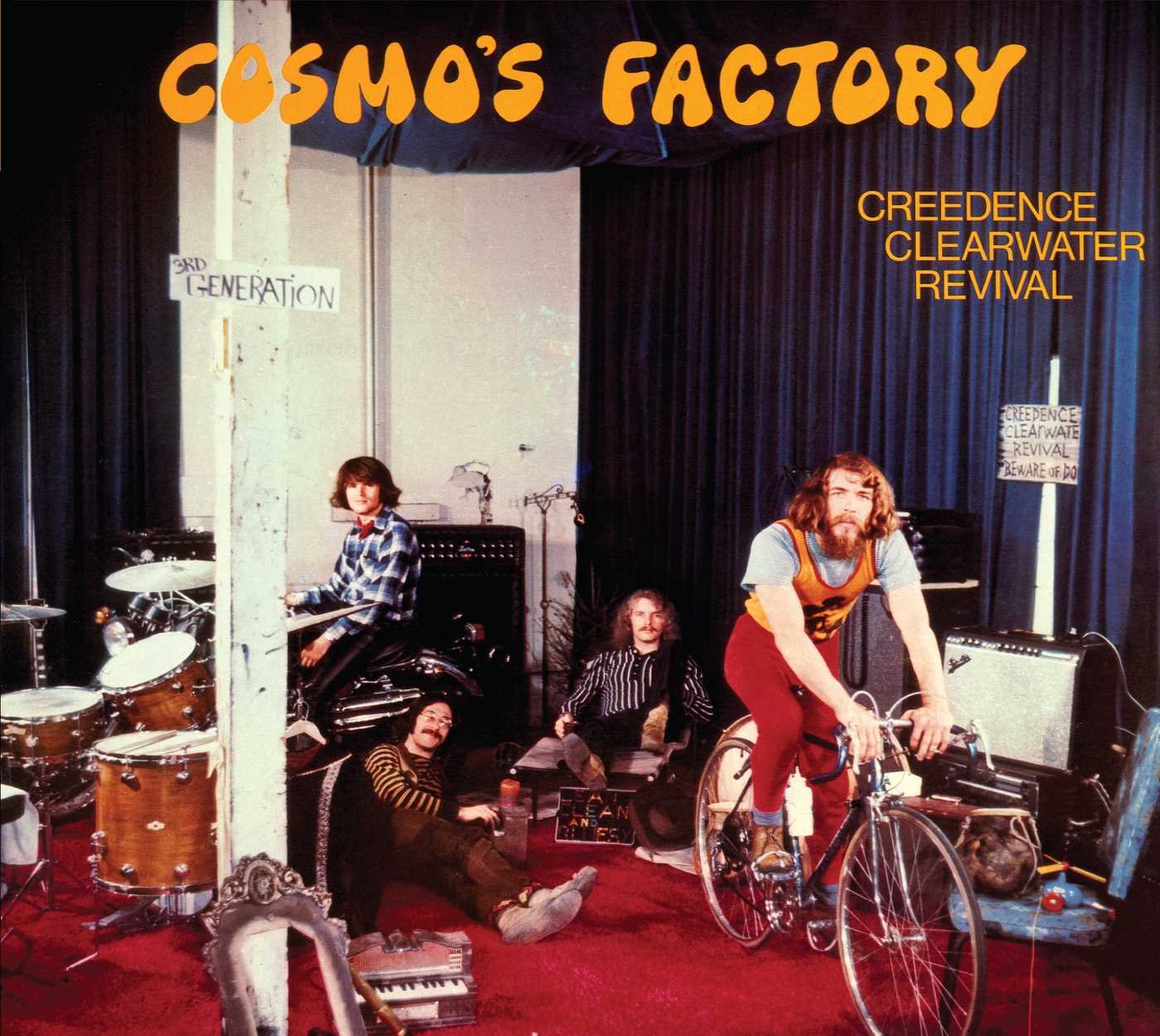 The 50th-anniversary reissue of Cosmo’s Factory just consists of the album: no B-sides, no rarities, no alternate cuts, no live versions, no outtakes. That’s because there really weren’t any. Creedence Clearwater Revival recorded what they wanted to put on their next record, then released it before getting right back to work. This was their fifth album in a little over two years, incredible even by the assembly-line standards of ‘60s rock groups. Blame John Fogerty, a famously idiosyncratic and controlling front man, and his conviction that the band would disappear if they dropped from the charts for even an instant. This might’ve been reasonable at a time when rock was just starting to cement itself as art rather than a trend, but it’s been 48 years since Creedence Clearwater Revival existed, and they’ve yet to go anywhere.

Cosmo’s Factory is one of those albums, like Thriller or Rumours, that sounds almost improbably like a greatest hits collection. It boasts 11 songs, seven of them originals, including “Lookin’ Out My Back Door,” “Run Through the Jungle,” “Up Around the Bend” and “Who’ll Stop the Rain.” These are staples of rock radio and movie soundtracks, and perhaps the best reason to pick up this reissue is to hear them through fresh ears. Radio ubiquity can be a curse—you think you’ve heard a song a million times when you’ve never really heard it at all. If you know CCR is a good band but never really bothered to sit down and listen to them because you’ll hear them involuntarily in the future, the time is ripe to think again.

Take “Run Through the Jungle,” which is about Vietnam the same way “Cross Road Blues” is about Satan: not at all, except in myth. Or when was last time you paid attention to how gorgeous “Lookin’ Out My Back Door” really is, how deliriously purple its lyrics are even as its down-home accoutrements distract from that fact? Or how the band keeps building tension for that one extra bar on the chorus of “Up Around the Bend,” making whatever’s around the bend sound that much more mysterious? Like the early Beatles, whose older albums like Please Please Me Cosmo’s Factory had a similar originals-and-standards structure, CCR starts with good, rock-solid pop songs and then lights the fire of inspiration under them. There’s always a little something that elevates these songs beyond craftsmanship to greatness.

Fogerty, see, was secretly as much of an artiste as your Wilsons and Wonders and Mitchells and McCartneys. But CCR’s unpretentious veneer and no-drugs-or-drinking policy in the studio means you’d be forgiven for seeing them as a no-bullshit bar band that just happened to make it. Fogerty doesn’t start with a concept but with the R&B, country, blues and rock ’n’ roll forms he might’ve heard around the East Bay shipyards as a kid. Then he infuses it with that weird Southern flavor that gives the music a secondhand mysticism, steeped in myth from the cradle of the blues. It’s hard to think of another band that’s at once at once so rooted in pop form yet conjured such a vivid new world. You’d have to return to mid-period Beatles or the Beach Boys circa Pet Sounds, or ahead to some of the bedroom projects and indie acts of the last decade—the auteur tradition, where one (usually) man with a dream waves a hand and great art appears.

Everything is in its right place on Cosmo’s Factory. The bits of seemingly unrehearsed band interplay, like the jokey jazz bit that opens “My Baby Left Me” or Doug Clifford’s concluding drum fill on “Travelin’ Band,” are so pat there’s no way they were made up on the spot. Listen to how through-composed “Ramble Tamble” sounds. It’s the kind of thing that’s called a “jam” by default, but it feels more like a symphony, and you can almost feel the sweat on the band members’ brows as they try not to fuck up the timing during its astounding midsection. When Fogerty sings “ramble tamble,” it’s not just rock ’n’ roll nonsense: it’s the title card. Their cover of Marvin Gaye’s “I Heard It Through the Grapevine,” meanwhile, is every bit a jam, and it shows; as much as it fills out the album, it wasn’t exactly screaming to be 11 minutes long.

Fogerty is both lead singer and lead guitarist, and he matches the imperfections in his own voice with his solos. On the aforementioned instrumental section of “Ramble Tamble,” Fogerty slides his hand up and down his guitar, and the resulting sound uncannily matches the doo-wahs on “Ooby Dooby.” His high note on “I Heard It Through the Grapevine” is that of a man who doesn’t really do high notes unless the song calls for it, in which case, goddammit, he’ll hit that note. When he reprises the melody in the first solo, the high note isn’t much more graceful; it’s worth wondering if Fogerty didn’t tweak his guitar tone to sound like his voice or vice versa.

“Ooby Dooby,” “I Heard It Through the Grapevine,” and the old Arthur Crudup song “My Baby Left Me” are three of the four covers. The last is “Before You Accuse Me,” the only track on which Fogerty really shows any sign of modesty. It’s a straightforward reading of a Bo Diddley blues they used to play in bars (an outtake from a 1968 session is one of the few documents of its kind to exist), and it’d be rote if not for the painstaking care in its arrangement: a deliciously lopsided wolfman lope driven by the rhythm guitar of Fogerty’s long-suffering brother Tom. The band is what makes this track great, not John, and he seems to know it; listen how he cuts out after the first notes of his solo as if proudly gesturing around the room at how good his band is.

Clifford and bassist Stu Cook were content to back up a songwriter they knew was good, even if it meant grueling rehearsals and minimal creative control. Tom, the band’s original leader, was not, and conflicts between the two brothers led to a breakup in 1972 that remains final. Tom died of AIDS in 1990, and Clifford and Cook toured as Creedence Clearwater Revisited for some time, enduring a barrage of legal threats from their former leader. But Creedence remains one of the few bands of the era never to reunite, leaving behind seven albums in just five years.

Cook claims he never listens to CCR, which seems incredible until you realize he was 26 when the band broke up and that his tenure in one of the most successful rock acts of all time constituted only a small part of his life. Artists are people like us. They move on with their lives and eventually die, and if their past achievements outlive them, it’s because of us, the fans, carrying them into the future. A new video for “Long as I Can See the Light,” released on Father’s Day, celebrates the dads that gave their kids the gift of rock ’n’ roll. For those of us who grew up on that music, this reissue is as good a chance as any to return to it and hear great art where we once heard classics. For those who haven’t, welcome to Cosmo’s Factory.