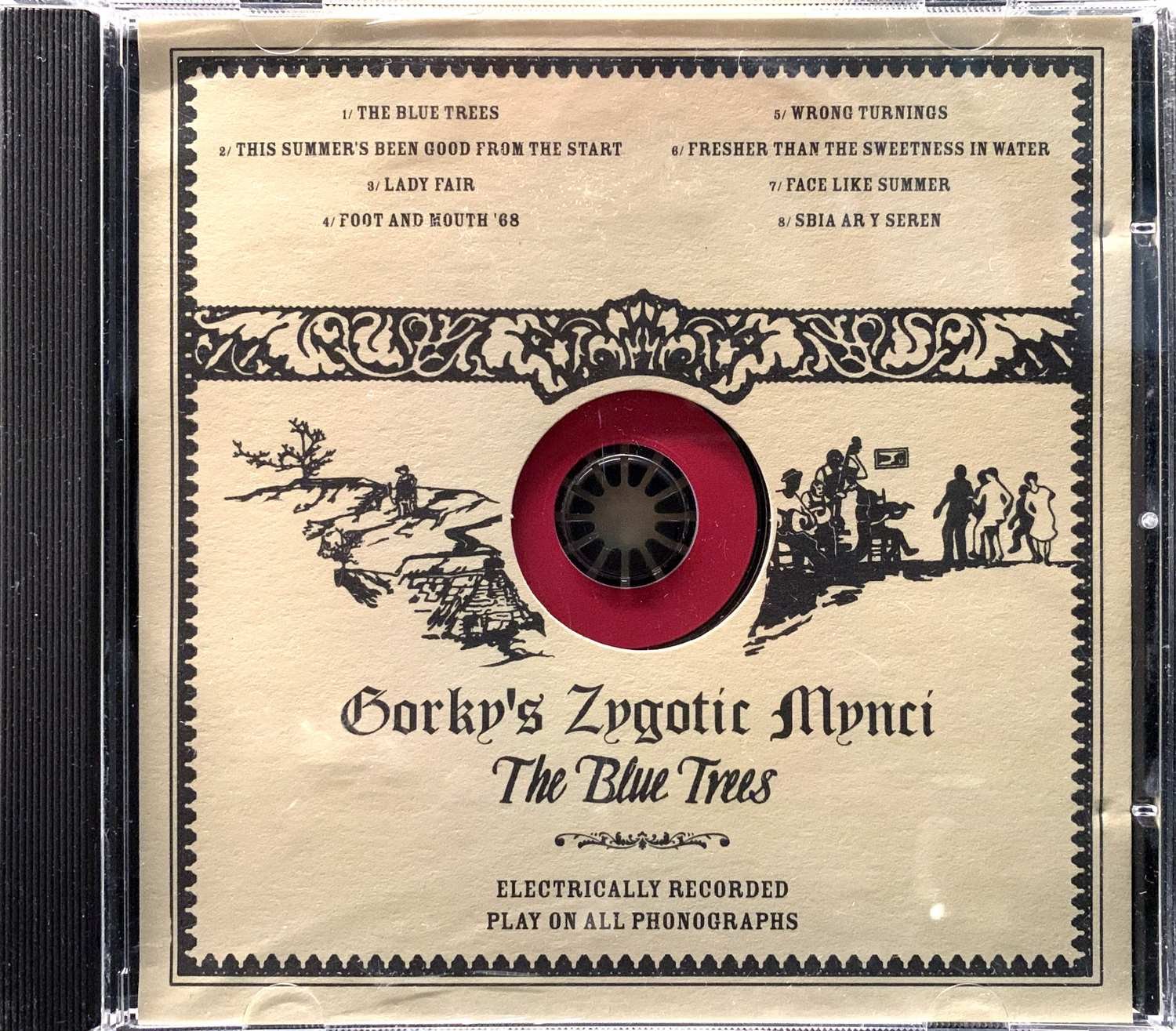 In the 20 years since Gorky’s Zygotic Mynci released The Blue Trees, it’s still a split decision whether the album is genius or junk. In the meantime, the band has broken up, and Euros Childs has hit the road as a solo performer, releasing a new album every year since 2006. In 2019 he also joined Teenage Fanclub, lending his keyboard skills as well as vocals. To say that Childs and Gorky’s have been underappreciated would be a safe bet. Bands from Wales have never really set the United States on fire.

Some might call Gorky’s Zygotic Mynci willfully obscure. Their name most certainly is. Euros Childs explained that the band struggled coming up with something appropriate, therefore it was decided, “…we might as well stick with the most ridiculous crap name we could come think of.” Accordingly, Gorky’s was derived from “gawky” and a “gork” was a dimwit. Zygotic came from biology, used as a state of being like a zygote which is a fertilize egg cell. Mynci is the Welsh spelling of the word “monkey” and is pronounced “monkey.”

The band seemed to specialize in music that was just a tad left of center. From the beginning their music was never easy to find, let alone latch on to, but there always seemed to be an instrument or note designed to make things even harder for the uninitiated to appreciate how good they could be. Avoiding the moments designed to alienate the unwashed, The Blue Trees is perhaps the gentlest and most musical of all their recordings. The emphasis is on capturing acoustic performances of the highest order, which they do right from the start. Opening track “The Blue Trees” is a fragile acoustic delight, primarily a duet between the acoustic guitar of Richard James and Megan Childs delivering decidedly gentle violin.

The Gorky’s built up their reputation as a Welsh band – one that sang in Welsh. In fact guitarist John Lawrence’s mother was a prominent politician who supported the use of the Welsh language. Yet with The Blue Trees only the final song is in Welsh and everything else is sung in English, a choice that was seen by many as a sell-out. Singing in English is a choice that has been made by many bands from Wales, from Super Furry Animals to Catatonia.

For a band that had been around for ten years at that point, “The Summer’s Been Good from the Start” is a song that spends time, looking back both at the summer coming to an end, and lives that have changed over time. Guitar and violin form a gentle groove as they sing, “And years from now why am I dreaming/ Of a time when I’ll be leaving/ Yesterday has not gone easy/ But it’s you I believe in.” Yet direction is still a question, one without an answer.

In the tradition of gentle folk tunes, “Lady Fair” questions the nature of love. With a gently haunting keyboard riff, the Gorkys capture the nature of love that will never been known, let alone consummated. “Ruby’s and pearls oh how I treasure/ What use are they to a poor heart/ In this world with palace and servants and gowns so fine/ What use are they when you’ll never be mine.” Truly heartbreaking is the notion that both the lady and the traveling man know the sadness of never knowing what might have been.

Some saw the quietness at the heart of this album as a sign of a band that had lost its way considering the nature of the Gorky’s work, especially their love of the offbeat. The Blue Trees was seen by some as the work of a band that had lost their way, it can also be acknowledged as a more mature work, one that speaks to their ability to change and grow. This isn’t the band of young kids who recorded their first work while still in their teens.

A sign of that maturity could be found on “Face Like Summer,” where piano and guitar form a bed for thoughts of relational maturity: “With a face like summer and hair like fire/ Could you be the one to let in/ ‘Cause I know that’s where it begins.” The hope here is for the kind of love that exists for the long haul, the kind of love that we all end up seeking.

Never quite scaling the heights does not mean Gorky’s Zygotic Mynci were a failure. Far from it, The Blue Trees is an album of subtlety and grace. Its inability to capture the attention of the record buying public should be a lesson to us all. It’s easy to miss a lot. If you missed it before, don’t miss it now.

Suzzy Roche and Lucy Wainwright Roche: I Can Still Hear You

Mother and daughter find reasons to hope during dark times. …