The bulk of Cold War, Polish director Pawel Pawlikowski’s 2018 Academy Award-nominated film, exists in the quiet peripheries. The economical tale of a doomed love affair may stretch over the decades following World War II, but most of its significant action lives off screen, a ghostly presence that informs the moments the director decides to share with us. Running at a scant 89 minutes, Cold War wastes no moment as Pawlikowski quietly traces the frequent braiding and unbraiding of a love affair between a musician and his student.

Though Pawlikowski was born in Poland in 1957, he left with his mother for London when he was 14 and settled there. After making a name for himself with documentaries, he jumped to feature films near the turn of the century, before taking time off to care for his children following the death of his wife. Pawlikowski returned to Poland for Ida, his 2013 Oscar-winning tale of a young woman uncovering the fate of her parents during World War II. Pawlikowski once again shot in his homeland with Cold War, a film inspired by his own parents’ on-again/off-again relationship that spanned many years and countries. 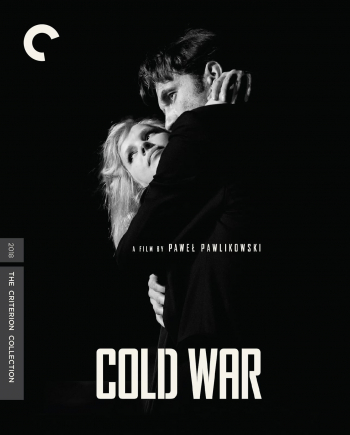 The story begins in 1949 when Wiktor (Tomasz Kot) and Irena (Agata Kuleza) travel the Polish countryside looking to record rural folk music before it vanishes. It is unclear if they have a relationship but there is a fondness between them. There, Wiktor and Irena establish a school of music in the remains of an Orthodox church. During auditions, the young Zula (Joanna Kulig) catches Wiktor’s eye. Untruths swirl around Zula, a city girl who disguises herself as a peasant to get an audition. Irena tells Wiktor that Zula is in trouble for murdering her father. The truth is somewhere in between as Zula tells Wiktor that she did not actually kill her father but “he mistook me for me for my mother so I used a knife to show him the difference.” The attraction between Wiktor and Zula is undeniable and they begin a secret affair.

The school’s music troupe gains popularity and, to Wiktor and Irena’s displeasure, becomes the mouthpiece for the Soviets. When playing in East Berlin, Wiktor hatches a plan for him and Zula to escape together to Paris. She never misses the rendezvous. He leaves her behind, kicking off a series of encounters throughout the years that the proves the strength of their initial connection.

Both Wiktor and Zula are complicated characters. He is difficult to read, a tall, thin phantom who says little. Zula is more impetuous and emotionally reckless. As the years pass, she visits him in Paris, he tries to see her in Yugoslavia and is sent back to Paris by government agents. By the mid-‘50s, they are living together in Paris, making headway in the music scene. However, their relationship flounders, forcing Zula to abandon Wiktor and return to Poland.

Pawlikowski films his actors in beautiful black-and-white, giving us a tale of two Europes: one burgeoning following the horror of WWII and another drowning in the grip of Stalinism. Somehow, Wiktor and Zula’s relationship only thrives in times of strife. They try to lose themselves in other people, but the damage has been done. They cannot get over what happened in the Polish countryside in 1949. Meanwhile, the world lurches towards modernity, an era that threatens to leave them behind.

Without Kot and Kuleza, Pawlikowski’s camera wouldn’t have a story to tell. Both of the actors, though inscrutable at times, breathe life into this tale that is melancholy and, at times, emotionally clipped. What compels Wiktor to leave the safety of Western Europe and dive back into danger? The film’s final moments are utterly devastating, a paean to all the lovers who have come together despite the odds, and then have been erased by the careless hands of time and history.