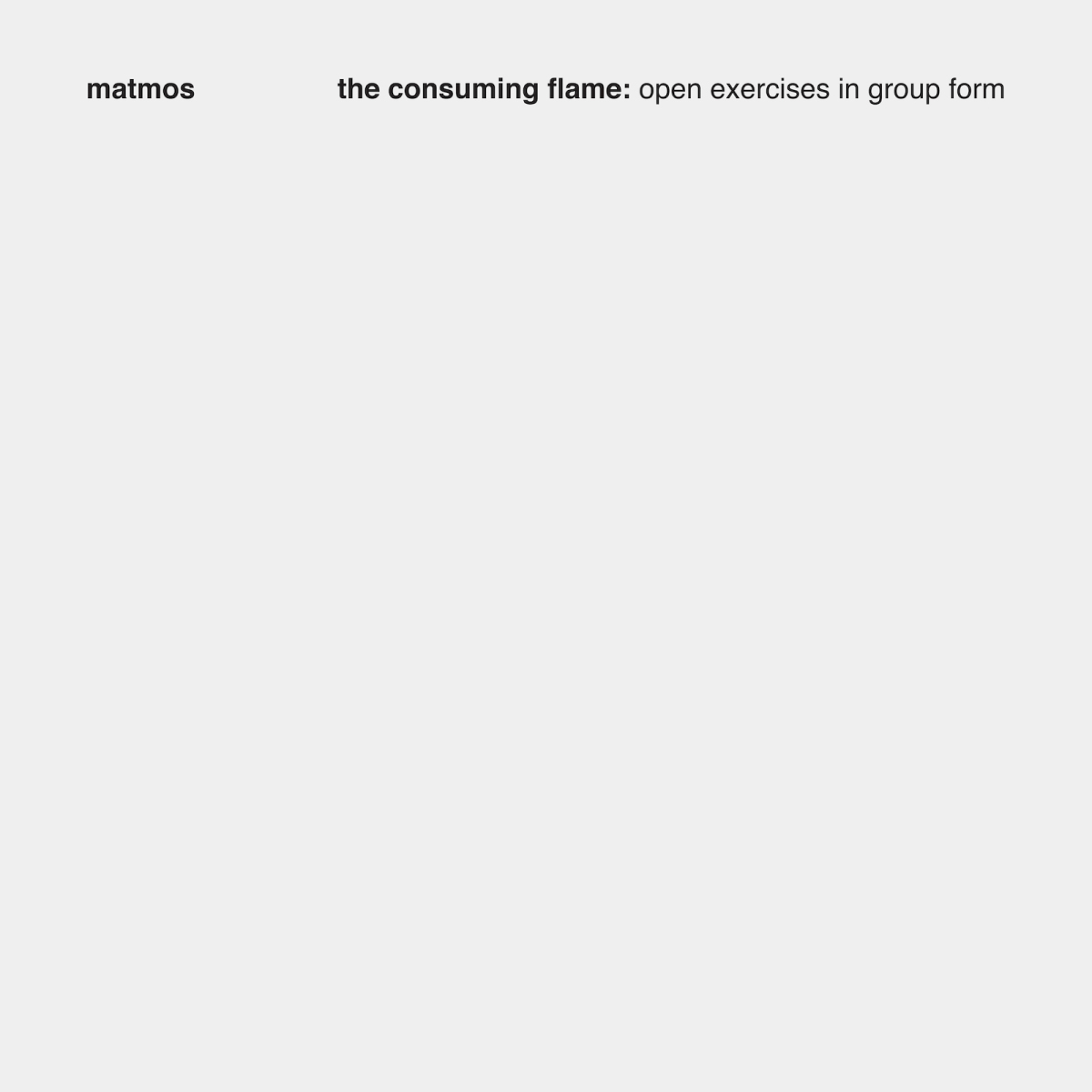 Back in October 1939, storied British Prime Minister offered comments on a BBC radio broadcast, in which he attempted to unwrap the Russian political motivations in the face of Germany’s bluster and war machinery.

“It is riddle, wrapped in a mystery, inside an enigma,” Churchill said. “But perhaps there is a key.”

In Churchill’s case, the key was Russian national interests. Much the same quizzical scope could be applied to electronic pioneers Matmos’ new 3xLP. But today, as COVID-19 and Trumpist nativism place the Western world on the precipice of a new Dark Age, the key, sadly, is less clear.

The new LP, titled, quite exhaustively, The Consuming Flame: Open Exercises in Group Form, is interesting, even good, in terms of its songs and compositions. “I, Voxelman,” an early entry, offers Oval-isms filtered through electric funk. “Friendsylum” has a jazzy, almost post-rock slinkiness to it. And the oddly scathing Consumerist critiques/voiceovers of “Platformalism” (“Netflix! Meta! Tinder! We met on Tinder, we died soon after! I quit smoking I quit vaping I quit everything!”) has, as its forebears, barb-tongued gems like Tom Waits’ “Step Right Up.” The sample-heavy “It Isn’t Necessarily the Case” sits between the cross-hairs of midcentury jazz and beatboxing. (Esquivel would enjoy this one.) The closer, “All of the Powers Lie Quiet,” has a pensive epic-ness to it. But the whole thing just doesn’t hold the line or even hold together; it’s a mess of ideas and sounds that don’t seem to build toward much of anything.

At this point, it should be stressed this is a collaborative work – a highly, highly collaborative one at that. Matmos members M.C. Schmidt and Drew Daniel invited 99 different musicians to take part in the experiment, per Pitchfork. Each musician was invited to contribute anything they wanted, as long as the rhythm was set at 99 beats per minute. Oneohtrix Point Never offered sounds and shapes, as did post-rock Godfather David Grubbs, Yo La Tengo, Half Japanese’s Jason Willett (another Baltimore connection), Marisa Anderson and many, many more. But among the alarming prospects of such color, the matting of the thing is fairly bland. A song like “Reciprocal Realms” seems endless and almost without purpose at 3 minutes and change; “Boomchicka,” at 13:08, is more ambitious but it’s no “Djed” (it’s not even a Rose Has Teeth) – no firmament runs through its technique-heavy core. You’ll spend good time consulting the poster-sized, color-coded insert about who appears when, only to find it doesn’t matter much. The thing just meanders noisily for a couple hours, even on the laborious straight-through trek.

Now, this being Matmos, there are probably larger measures and meanings inscribed on the tea leaves. Schmidt and Daniel have academic-minded intentions often and listeners, no doubt, will wonder what they’re supposed to make of the 3 LPs. The sad thing is Matmos doesn’t tip its hand enough and the material has a somnambulistic quality to it, a kind of way of blurring the good intentions with the bad. Yes, the sequencing is interesting, maybe even inspired at times. (The 3 LPs, listened to in one sitting, are essentially three long tracks, all in similar time.) But, to what end are we listening?

At this stage of the game, after Bjork and The Civil War and A Chance to Cut Is a Chance to Cure, Matmos’ two sound-structuralists have little left to prove to the likes of us about their creativity or their ingenious methods. Listeners might just need a little more hand-holding or context than this project appears to offer. Yes, there might be brilliant moments on The Consuming Flame but they are lost in the overall quagmire of the scope of the thing – and that’s a big loss not only for Schmidt and Daniel but the 99 who gave their time and sweat to appear herein.

Enjoy a rich grab-bag of rock and pop joy that keeps you on your toes. …