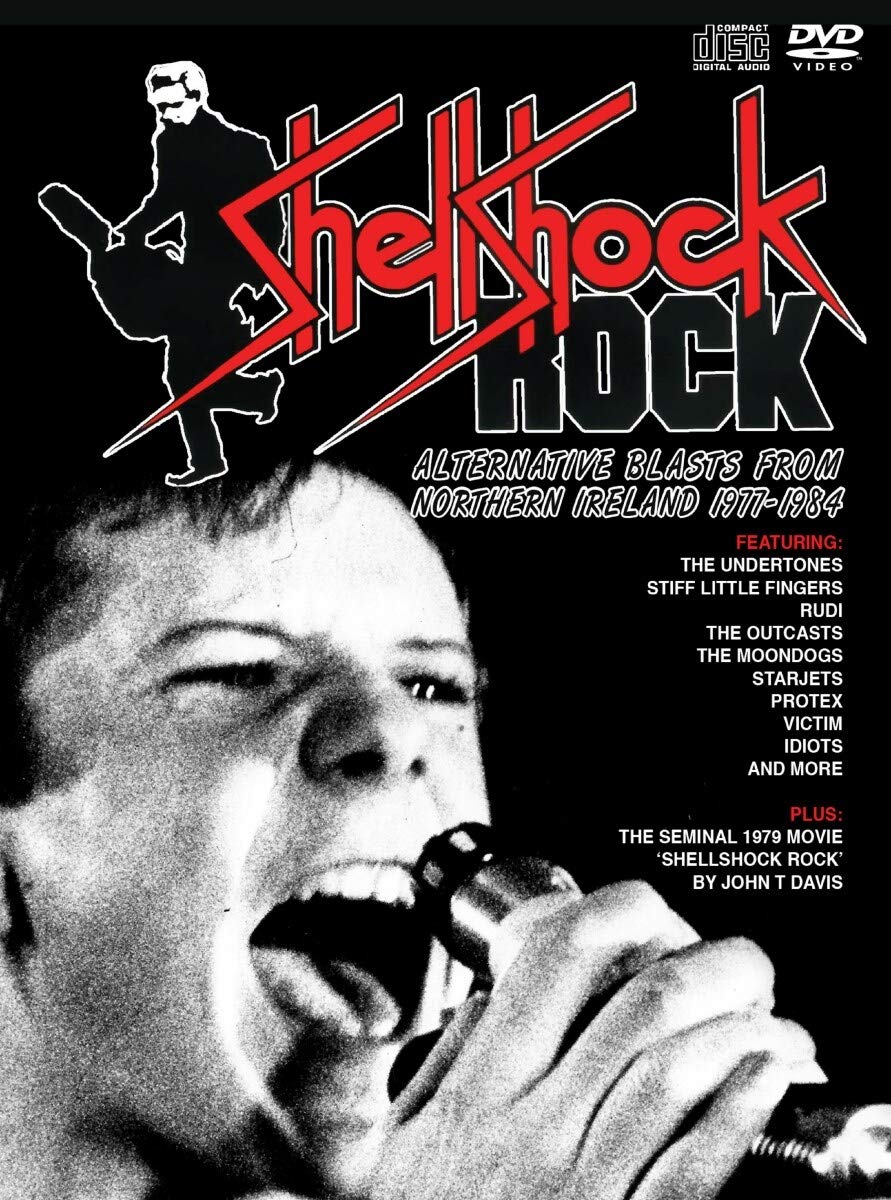 While restive British youth celebrated “white riots” and Johnny Rotten namechecked the IRA and the UDA in “God Save the Queen,” bands across the Irish Sea dealt with grimmer mayhem. Generated by or reacting to that same nation’s dogged occupation in the northeastern corner of Ireland, these resulting clashes with the natives made their violence tragic rather than theatrical. Rather than a calculated pose struck by slumming art students in Mondrian-patterned shirts, the escalating conflict tallied a death count nearing 2,000 by the end of the 1970s. Left out of this stark statistic were hundreds of thousands of casualties with deep wounds less visible.

Shellshock Rock: Alternative Blasts from Northern Ireland 1977-1984 follows multi-disc CD sets from Manchester, Liverpool, Scotland and Sheffield. Cherry Red Records diligently compiles both the few familiar and the many forgotten lineups who took advantage of DIY energy to form or sign with startup labels, and whose reputations rose or fell depending on their marketing savvy, word-of-mouth acclaim and, inevitably, sales.

What distinguishes this fifth anthology from others issued by this longtime indie purveyor? John T. Davies’ DVD of his eponymous film (not provided for review) boosts the impact of these three discs. While this discography remains the lowest total compared to Cherry Red’s anthologies to date from Britain, these scrappy Irish contenders bring energy, restlessness and bravado.

One of the leading voices, Belfast’s Stiff Little Fingers, issued a single that titled their debut LP, Alternative Ulster. That long-player included similar protests in “Suspect Device” and “Wasted Life.” Such tunes caught the attention of BBC DJ John Peel, who would insistently play another ditty from a cheerier group from Derry City, the Undertones. “Teenage Kicks,” heavily promoted by Peel, led to the band’s appearance on “Top of the Pops” and a tour with, inevitably, the Clash.

While these two bands endured as successful musicians with major-label careers into the early ‘80s, their peers tended to languish. However, as the liner notes to Shellshock Rock detail, Terri Hooley’s hippie-anarchist loyalties did not prevent him from stocking punk singles, and then channeling the garage-grunge sounds of local punks that he could beckon to into career opportunities, thanks to the label named after his shop (just like Rough Trade who’d sign SLF), Good Vibrations. Rudi, Protex, Victim, the Idiots and Ruefrex followed, with paper-covered 45s.

These took inspiration from Dr. Feelgood and resembled at times Joe Strummer’s pub-rock outfit, the 101ers. Yet, as post-punk and gloomy keyboards replaced punk in the favor of British fans, Good Vibrations failed to exploit the next decade’s trend. IT Records had its product destroyed by a car bomb in Portadown. Polydor did not release the Chas Chandler-produced album by Protex. They issued the one by Xdreamysts, but only in Holland. Yet, odd credits testify to the endurance of talent. For instance, Colin Bateman managed Dogmatic Element before breaking out as a novelist. Ballymoney’s bassist Clive Culbertson bridged the rock era. He was spotted by a showbiz magnate who worked with Them—a Belfast quintet where Van Morrison first gained the spotlight— and Clive’s career crested into New Wave, country rock and power-pop, before he backed up Van the Man on tour and in sessions later in the 1980s. The ragged or catchy music assembled here by Culbertson and his peers captures the now-vanished sensation of youth in small towns or urban ghettos far from the presumed center of the action, integrating their record collections and cassette tapes of Peel on air into their amateur vision of what energy and passion might change. The long echoes of the Nuggets sounds—and that of Them itself circa “Gloria” during the British Invasion—which emitted from similar bands 15-odd years earlier emanate from many of Shellshock Rock’s inclusions, as raucously renewed.

As for the film documented by Davies, Thurston Moore somehow caught it shown in the East Village in 1979. This shows how ripple tides of provincial scene-setters may leave distant and lasting imprints. That alternative that SLF’s Jake Burns promised may have been considerably delayed, but whatever the status of today’s Ulster, it’s a more peaceful place for rock’s veterans.